Our grandchildren will be born into a world without Elephants. [Warning: Graphic] 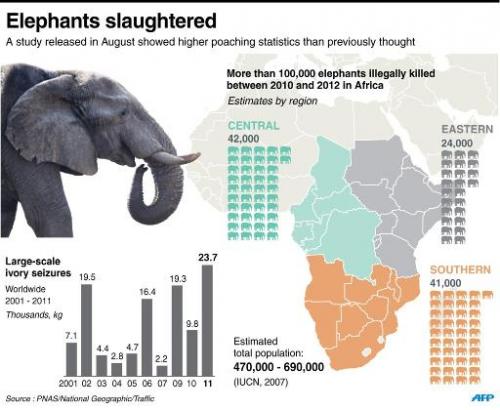 This isn’t hype. This is what’s happening.

Elephant Slaughter, Ivory Sales “Out of Control”: Wild Elephants Could Disappear Within a Generation (phys.org)

Death Spiral: don’t just read this. Act or it’s over.

How to help (more below): “Skyrocketing demand for ivory in China—the wholesale price of raw elephant tusks has tripled in just four years since 2010—have sparked a booming trade in smuggled ivory that is driving the unsustainable killing of elephants in Africa,” said the report released in the Kenyan capital.

“Every metric on the ivory trade has exploded upwards in recent years. The prices of raw and worked ivory in China, number of licensed carving factories, retail outlets both illegal and legal, items on sale, all have shot up,” they said.

“Meanwhile the weight of ivory seized and number of elephants being killed in Africa have also increased.”

The number of legal ivory stores in China shot up from 31 in 2004 to 145 last year, while the number of ivory carving factories increased from nine to 37 over the same period. 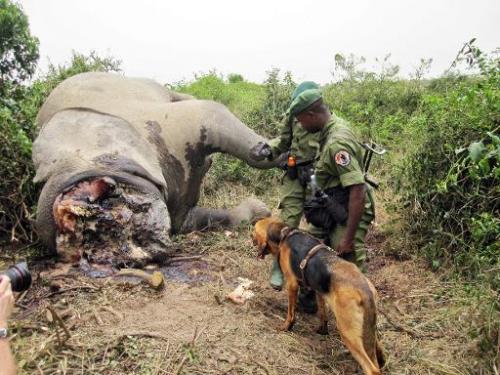 Graphic: Rangers and their dog look at the bloated carcass of an adult elephant after poachers removed its head to get at the tusks in the Ishasha Valley of Virunga National Park, in the Democratic Republic of the Congo

Wow. The NRA is opposed to an ivory ban:

In February, the Obama administration moved to tighten the rules on ivory sales in the United States, one of the world’s largest markets. In June, New Jersey became the first U.S. state to agree on a complete ban. Yao and WildAid want China and the United States to follow suit and for the world to reinstate the complete ban on ivory exports that was in place from 1989 to 1997. They also want renewed efforts to curb the trade in rhino horn.

It won’t be an easy sell. President Obama has to overcome opposition from the National Rifle Association, which is concerned about the value of guns with ivory-inlaid handles, and China must halt a traditional carving trade that is thought to date back five millennia and tread on the toes of powerful vested interests.

“China is a rising economic country. More and more people are living in better economic conditions now, but we have to balance our desires,” Yao said. “If we don’t balance that, it is pretty obvious we cannot live alone on this planet. If there is a list of species going extinct, I am pretty sure we won’t be last on that list.”

Visit lastdaysofivory.com to get informed and take action.

“As a general rule, if you see pictures of people riding elephants, avoid it.”

March for the Elephants on October 4th.