The Benefit of Hugging Strangers. 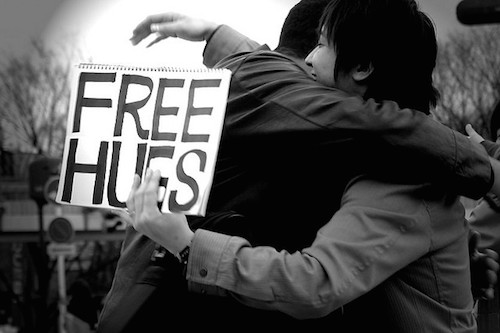 The best hug I’ve ever had was with a stranger.

It was at a tantra workshop where I was instructed to hug everyone and notice how the hugs differed.

My partner was thirty-something man, fat, had a greasy black ponytail and wore all black clothes below an expressionless face. I did not expect a great hug. But wow.

I didn’t know hugs could vary so much.

But this stranger introduced me to a wider bandwidth of tactile communication than I had thought possible in a hug.

It’s hard to describe in words the subtle conversation of compression and release—in the arms, the chest, the belly, the hips and the breath. He showed me that hugging is a dance and that our hug was a finely co-improvised tango. The movement between our bodies was subtle yet unambiguous.

To move together like this required a powerful openness to the sensation of touch.

This heightened awareness of touch was fairly new to me. I had only recently discovered my body’s underutilized potential to feel at Ecstatic Dance, a free-style movement meditation practice.

To attendees, it’s simply called “Dance” and it requires some explanation, as it is unlike any other dance.

At Dance the music comes in a wave, starting soft and slow, then becoming louder and more chaotic until peaking at which point it returns to gentleness. I went to Dance every Sunday morning for a year to participate in this community that welcomed over a hundred dancers including children and senior citizens. It was substance free, and there was no talking.

The only other rule was to respect ourselves and fellow dancers.

One aspect of dancing in a well-lit room full of strangers without any alcohol is that it relentlessly lays bare the ego. Many of the friends I invited were painfully self-conscious about moving in such an exposed environment. They had ideas about what dance should look like, and their minds churned with imagined inadequacy.

However, a few friends found that by dancing they were able to experience a focus on their movement which cleared their thoughts of comparison and judgment—if only briefly.

Like them, I wasn’t able to think and be in my dance at the same time. My mind would often focus on attractive women and when that happened my movements somehow became stiff and rehearsed.

I wasn’t in my body.

Instead I was in a thought cascade about: whether I even wanted to interact an attractive woman after recently exiting a long-term relationship, whether to move toward her, how to signal interest in dancing together without any words, whether she would reject me, whether engaging her would not be respecting her dance, whether she would perhaps move toward me if I just danced well enough.

At some point, I realized that, if I just moved and focused my attention on moving, the thoughts would subside. It was an immense relief to be liberated from those thoughts and it was a great joy to abide in the whirling of my body.

One of my biggest lessons from Dance was touching strangers.

A popular way of moving at Dance is called Contact Improvisation in which multiple people explore the relationship between their bodies in motion. This involves subtle tactile conversations between dancers in which no one is leading or following but they find themselves moving together—often rolling around and over each other on the floor and in the air.

Because there is no talking at dance, most of the dancers remained strangers even after I had danced among them for months. I wasn’t sure it was okay to roll my body over every part the body of someone whose name I didn’t even know.

So, for months, I danced by myself. But, as time went on, I began making friends at Dance. So, instead of dancing alone in a sea of strangers, I began dancing in and out of little friend eddies.

And then, several months into this journey, I touched a stranger. It was during the end of Dance as the music calmed. I was slowly rotating my body with arm outstretched when, out of the corner of my eye, I saw my arm softly collide into another arm. Our bodies had run into each other at an angle where neither of us could see who we had touched.

I remember feeling the warmth and pressure between our arms. It felt pleasant and natural. Surprisingly, my arm stayed in contact instead of pulling away.

Dancing all these months with an awareness of the body instead of the thoughts had somehow melted my habitual aversion to touching a stranger. We rolled our point of contact up our arms, around our backs, and down the other arms until we came to face each other with just our index fingers touching.

I was dancing with a woman in her sixties. We looked each other in the eyes. I felt calm, thoughtless. And then our fingers began moving. We lowered to the floor, our eyes still fixed on one another, and let our hands explore each other based purely on tactile sensations—our fingers, palms, and wrists grazed one another with blissful sensuousness.

As I stumbled into more and more of these moving encounters, I began to feel dance extend beyond the confines of Ecstatic Dance.

In social interactions, conversation became dance. I felt dance in my body as I walked down the street and looked into the eyes of passerbys. And the more I engaged life as dance, the more other people—particularly strangers—began to dance with me.

I think that’s why I was able to feel past my preconceptions about hugging a stranger.

A couple of months after my year at Dance, I was walking down a street in Morocco when a guy touting hash grabbed my shirt and said, “You buy hash.”

“Don’t touch me,” I responded.

Reacting unthinkingly to the insult, I said “F*ck you” back.

“F*ck you!” he shouted coming closer to me.

Oddly, my mind calmed in response to his escalation.

My reactivity receded, and I was suddenly aware of the sensation of his hand on my chest. I felt its soft pressure and realized I didn’t really mind the touch. A smile came to my face. “Thank you,” I said, inwardly bowing to him for the lesson.

He looked me in the eyes and a smile came to his face.

Laughing, he released his grip, and offered his fist for a fist bump.

The best fist bump I’ve ever had was with a stranger. 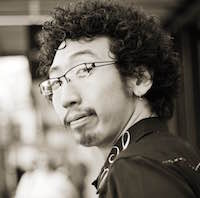