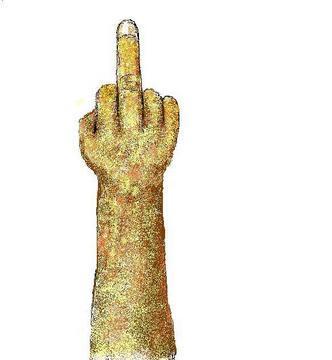 The journey toward enlightenment is really freaking hard sometimes.

We read the books, we meditate, go to yoga, juice cleanse and wear mala beads, but then some idiot comes barreling down the road in a Hummer and just about kills us on our healthy and environmentally sound bike.

A once cheerful, romantic partner turns spiteful and vicious following a breakup.

Our parents disappoint us.

Some jerk throws a fit in Starbucks and makes the barista cry and we find ourselves really wishing we could throw hot coffee in his stupid face.

All these fools can really block our positive flow of Qi, and oh my god, some days doesn’t it just seem like idiots are everywhere? I know.

I often wonder how can I ever reach a higher plane or quiet my mind when I’m surrounded by a pack of nut cases? How can I learn to stop reacting to them and their drama so that I can find my inner peace again?

Jesus said: “Love your enemies” and Buddha said: “Hatred will not cease by hatred, but by love alone.” Gandhi, Dr. Martin Luther King, the Dalai Lama and every single other great spiritual teacher who has ever lived has agreed.

It sounds beautiful and simple in theory, of course; but when it comes to actually practicing it, how can we find calm and love when someone is behaving abominably? I mean, like, really, really badly? For me, this is easily the most difficult spiritual lesson that I will ever learn (and re-learn, and keep learning probably until I die). It’s super tough to stop judging and start understanding, but it’s a necessity.

We must have compassion for a**holes.

When we can understand situations from perspectives vastly different from our own, and when we can truly feel where someone else is coming from, sometimes their behavior can at least make more sense. Know, too, that understanding doesn’t mean condoning.

Many of us were taught, perhaps unconsciously, that evil exists, that there are good people and bad people. It’s not true. The concept of evil is a hold-over from times when people had significantly less understanding of psychology and human development, and believing in evil is a primitive thought pattern.

What most people call evil is actually pain and illness. Most people who do terrible things do so because they were abused or brainwashed or not adequately loved. Even more are simply mentally ill and cannot help their actions. They live in constant torment and suffering and lash out from their pain. Even psychopaths, guilty of the worst crimes, have been scientifically proven to possess physically different brain structures than non-psychopaths.

These people aren’t supernaturally evil. They have serious and terrible disorders that are beyond their control.

It’s okay to walk away from volatile situations. It’s healthy to remove oneself from drama in order to breathe, meditate, create a calm space and find perspective. Stop making plans with the rude relatives. Compassion is much easier to cultivate from a distance. Don’t get caught up in the mayhem.

See the Offending Party as a Child.

If we can see someone who is behaving badly as a hurt, frustrated child it can be much easier to nurture and love them. Kids throw fits when they’re tired, hungry or sick. They have their worst tantrums, though, when they are having trouble communicating their needs and emotions. Most adults throw fits for the exact same reasons and if we can realize that there is an underlying cause behind their negative actions, we can understand and perhaps help them to alleviate their frustration.

Allow for the Possibility of Extenuating Circumstances.

The story about the little boy on the train has been life-changing for me. I think about it almost every day and it’s been so long that honestly, I can’t remember where I first heard it.

A kid is being horrible, I mean horrible, on a train ride. A fellow passenger is just disgusted. The kid’s dad is doing nothing. The kid is just getting worse and worse. The passenger cannot even believe it. Then, the kid’s dad apologizes and says that the kid’s mom just died the day before. The child is terrified, grieving, cannot understand what has happened and cannot process his unimaginable loss. Hence the behavior. Suddenly, what once seemed annoying, disgusting and like bad parenting is now heartbreaking and completely understandable. The judgmental passenger realizes his error.

So, how are we like the passenger on that train when we see people doing awful things? Instead of judging and becoming annoyed, let’s try to imagine what else might possibly be going on in the lives of others. Maybe that jerk in Starbucks just found out his wife has breast cancer. Maybe his kid overdosed last night. You never know, and remember that you never know.

We generally judge other people’s behavior through the lens of our own biases, but in many cases, things people do that may seem awful, wrong, ignorant and bad to us are behaviors that are ingrained in people from their upbringings, and which, in a different context or culture, are perfectly normal and acceptable. What can be an abomination to us could be a noble and heroic act to someone else (or at least perfectly normal and unremarkable).

If compassion for someone else becomes difficult, it can be useful to look at our own failings.

What about the times we behaved spitefully? No one is perfect. Every one of us has screwed up, made mistakes, lost our patience and acted like an idiot before. How did we want to be treated in the same situation? What did other people do for us that helped or harmed when we were in a volatile state?

Be the helpful one. Cut the other person some slack.