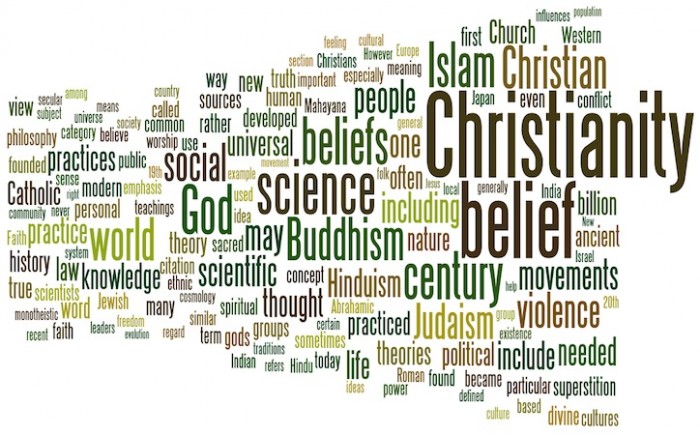 Sometimes it can seem as if everyone these days wants spirituality without the trappings of organized religion.

We want the spiritual experiences without the dogmas, hierarchies, and exclusivity of organized religion. But decoupling religion from spirituality is not easy.

The irreligious tend to overlook many of the deeper functions of religion. Organized religion shines a light into the unknown, where we come from and where we are going. It provides answers, but the answers tend to be provisional, deepening with our own understanding. This sustained attention prepares us for the transitions that will inevitably upend our lives.

Religion mediates the transitions of birth and death, entry into adulthood and the consummation of marriage. It provides myths and teachings through which we might contemplate and contextualize suffering. And these teachings become part of the cultural repertoire, a set of motifs that are laced through literature and art.

None of this can be accomplished through either the natural or social sciences. And most of it cannot be accomplished through sitting alone and meditating either. Religion brings us together with others to accomplish these functions. And in bringing us into community, it eases the burden of facing a vast and imponderable universe. While philosophy might accomplish much the same goal, it will tend to arrive at divergent answers, thereby alienating us from one another. But religion uses these experiences to widen our horizons in communion with others.

The sociologist of religion, Peter Berger, has also noted that religion creates the spaces through which we might process our most unconventional experiences—birth, death, psychosis, depression, disease, violence, the uncanny. It is precisely these sorts of experiences that are the greatest threat to social order. For in signaling a departure from everyday experience, they throw into question how we live together. Hence, in contextualizing these sorts of experiences, religion can hold together a social order.

Even spiritual practice seems to require organized religion. It can take decades of training to produce a good meditation teacher. And since meditation takes time to master, many teachers are needed to help guide students through the trials and tribulations of spiritual awakening. Sustaining a meditation practice also tends to require the support of a community. And communities require facilities in which to gather. They need books to support their practices and these often require special publishing companies. The same applies to yoga and dance and anything else we might turn into a spiritual practice. And all of this minimalist support for spiritual practice, which few individuals are strong enough to sustain on their own, starts to look a lot like religion, as do the dogmas and hierarchies most of these communities sustain.

The New Atheists would probably not fair much better. If some community of them sought to sustain a contemplation on birth and death for decades, providing mutual support through times of transition and a place through which they might all might gather when times were tough, if they sought to awaken in their members a sense of fellow feeling and love and an awe at the splendor of the universe, they would need to raise money for a place in which they might meet and to appoint leaders to manage their activities. And in time it would all start to look like a religion. We can already see a quasi-religious exclusivism in the New Atheists, the sense of righteousness about their approach to questions of ultimate concern, the emergence of a series of practices, however intellectual, of contemplating the unknown, the appearance of teachers.

The perennial problems of religion still remain, the way it binds its members to exclusivist communities, believing themselves better than unbelievers, wedded to dogmas, closed to reason, submerged in groups, and often ready to fight for their own against the alien other. But religion can teach us to expand our circle of compassion and sense of the human community. Through imagining the world through the eyes of God, we can learn what it is like to view all humans equally. Hence, the challenge is one of opening religion outward without losing its multiple personal and social functions. The new critics of religiosity seem barely to have scratched the surface in meeting this challenge. We need a deeper atheism and more inclusive religiosity. Toward that end, all of us can do better.