How Naked Modeling Changed Me into a Perfect Work of Art. 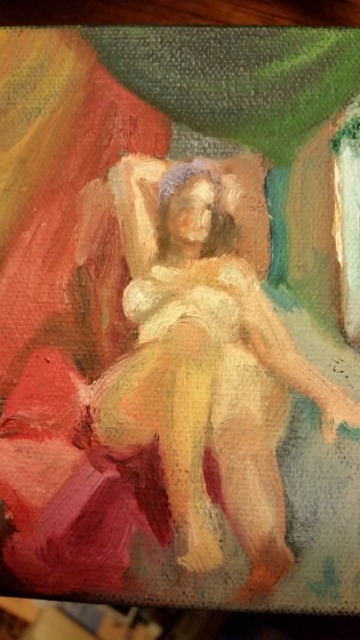 We never know what moments will transform us.

One of those moments took place for me on a hot July day in Tucson, Arizona. I was scheduled to model at the Community College for one of my favorite teacher’s figure drawing classes. I had modeled for this teacher a half dozen times before and I particularly liked the fresh, raw art she was able to pull from her students.

Her classes took place in a small, windowless, overly air-conditioned room that held about 20 young aspiring artists. There were no props—just a plywood platform in the middle of the room with a rug thrown down over it. Very bare and very simple.

I took my clothes off, hung them on the hook on the back of the door and walked to the center of the room.

Walking around naked in a roomful of people wasn’t new to me. I had been modeling for about two years, ever since I’d had a chance conversation with an artist at a clothing optional resort in Northern California. He told me he was in charge of scheduling models for his figure drawing class and asked if I would I like to model for one of his classes. I didn’t have to have experience, just the willingness to do it.

Fun to draw? Me? With my big fat ass?

On the other hand, being told that I would be fun to do anything with at the age of 60 tantalized me. I thanked him but, dang it, I didn’t live in California. I lived in Arizona. Sorry. He explained that if I was interested, all I had to do was call up the local community college and sign up. They always wanted new models.

Maybe they wouldn’t care that I was an old lady, I thought. Maybe they, too, would think that I would be “fun to draw,” big fat ass and all. Hmmm.

Besides, my ego had been boosted.

When I went up to our room I told my husband what the massage therapist had said. Turns out, he himself had modeled when he was at Rice University to help pay for tuition. “You could give it a try,” he said. “You’re enough of a happy exhibitionist to like it.” Anyways, he reminded me, I had been looking for part-time work.

So, when I got home I called the local community college. Simple as that, I ended up walking naked across this particular classroom towards this particular plywood platform to take a reclining pose.

People would ask me how I could take my clothes off in front of strangers, but I would tell them that, in fact, taking your clothes off isn’t the hard part. The hard part is holding the pose for 25 to 45 minutes without moving a muscle (not even your eyes)-–-that’s what separates the men from the models, so to speak. Well, that and, despite my husband calling me a “happy exhibitionist,” I had to get over a childhood scene in which my mother had taken me to the doctor to see if he could do something about her “how-was-this-girl-ever-going-to-find-a-husband-with-those-hips” daughter.

Early childhood scenes aside, I climbed up on the platform and, settling myself, wedged my meditation cushion between my upper back and the floor for leverage. I put one hand behind my head in what I hoped looked more or less like a woman relaxing by the pool and raised one knee higher than the other to give the pose some élan.

The teacher turned out the lights, darkening the room completely, and shone two standing spotlights on me.

The students pushed themselves, easels and all, up around the platform to catch the light. They were so close I could have reached out and touched any one of them. Their pulling close made me feel wanted, like they were hungry for every nuance of the pose.

The teacher wanted two (grueling) 45-minute sessions of the same pose with a 10-minute break in between. She put classical music on the CD player and turned on the timer. This teacher did not lecture while her students were working and even instructed them to be quiet and just draw or paint. She herself painted during the modeling sessions, and with the silence a heightened energy would creep into the room.

I found my focus point on the opposite wall and prepared myself to hold absolutely still until the timer went off. To calm my mind and keep from wiggling I would count the seconds and minutes for the length of the pose, a practice that in itself put me into a kind of hypnotic, trance-like state.

I could even hear them concentrating.

Maybe it was the closeness of the room or maybe it was the heat from the spotlights, but at some point the classroom reality receded and it was as if I was no longer lying on a rug on top of a plywood platform. Another reality emerged, and I felt myself lying on a velvety forest floor. There were no harsh spotlights shining on me, but instead a glowing sun pouring down in golden shafts through the branches of trees. The students became ferns, drawing and painting with their waving leaves. I could feel alchemy take place, and in my mind’s eye I no longer saw myself as I had seen myself all my life.

Instead of a thing to be exercised, starved, shrunken or compared, I suddenly saw all 200 curvaceous, zaftig pounds of me through the eyes of the student artists who were surrounding me and who were making of my form a lovely creature of the forest.

I surrendered to the moment and allowed myself to be carried away by the thick air in the room. Tears of gratitude for the beauty of it all—for the intimacy of it all—spilled onto my breasts, onto the rug and onto the platform on which I was lying, bringing with them a new vision of myself.

Those moments in the students’ forest transformed me from a woman who had lain down on a plywood platform so others could look at her as art, into a woman who saw herself as art.

Today, at 73 years, I no longer model. When I take my clothes off and look in the mirror I am, of course, flabbier and dimplier than when I was then. I have even more creases and waddles and wrinkles than I did over a decade ago. But the marks of time on my body have not erased the vision that changed me that day when the classroom turned into a forest. Today, I still see the great truth that was revealed to me when the plywood platform became velvet.

I still see that I am a work of art in my own right.

A perfect work of art.