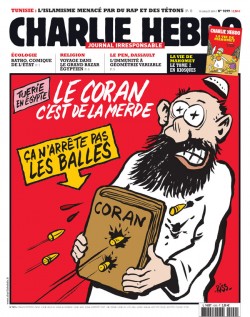 Let the criticism come. I am not Charlie.

Wednesday’s attack on French satirical magazine, ‘Charlie Hebdo,’ has left 12 dead and the world in an uproar of solidarity.

Few, however, have considered this an appropriate time to challenge the publication’s tactics.

Naturally, we all condemn the attacks. Naturally, no one condones violence as a means of protest against politically or religiously offensive images. None of us, myself included, would ever wish to curb the right to free speech.

Nonetheless, some have found it necessary to call into question the judgement displayed by Charlie Hebdo’s publishers.

This is about more than terrorism.

In 2012, in support for a deliberately anti-Islamic American video, the magazine printed a series of sexualized, highly offensive images of the Prophet Muhammed, defying requests by the French government to hold them back. Fearing probable retaliation, then foreign minister Laurent Fabius closed embassies, schools and other centers in 20 countries, saying, “Is it really sensible or intelligent to pour oil on the fire?”

The images, crude by any standard, were doubly offensive since Islamic law forbids any depiction of the Prophet—even if respectful.

At that time, the White House denounced the images, with press secretary Jay Carney saying,

“We don’t question the right of something like this to be published. We just question the judgment behind the decision to publish it.”

Did Stéphane Charbonnier and his staff have a right to publish what they did?

That’s a more complicated question. Is it wise to endanger the lives of embassy workers and expats (as was done in 2012) simply for the sake of being provocative? Is it wise to bait violence, justified by the fact the violence is not an acceptable response to said baiting? Is it wise to publish offensive content, not because it is challenging or constructive, but because you can?

These are the questions we are not asking in the wake of this tragedy because, frankly, it’s not in very good taste to do so. The violence of Wednesday’s events (and the violence that continues as police pursue the attackers) is inexcusable, absolutely, but I stand with the victims, not the publication itself. 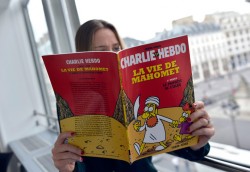 In 2013, Al Jazeera reported on the publishing of a series of cartoons called, “The Life of Muhammed”:

” ‘To transform the life of the prophet of Islam into a cartoon is in itself a mistake,’ Ibrahim Kalin wrote on his Twitter account.

” ‘Whatever the people at Charlie Hebdo say, this is a provocation.’ “

I believe wholeheartedly in the right to free speech. And it is a right, not a privilege. But still I question the judgement of taking advantage of that right in such a dangerous way.

There is, furthermore, the issue of hypocrisy, which I would be remiss in bypassing. A recent BBC article discusses the place of Charlie Hebdo in French journalism and the evolving role of satire:

“Back in the 18th Century, the target was the royal family, and the rumour-mongers wrought havoc with tales—often illustrated—of sexual antics and corruption at the court at Versailles.

Nowadays there are new dragons to slay: politicians, the police, bankers and religion. Satire, rather than outright fabrication, is the weapon of choice.”

Was Charlie Hebdo a champion of free speech in the face of all religious, political and cultural tyranny, or was it maybe, just a little bit, a product of the Western hegemony’s crusade against the carefully fabricated dragon of Islam and all it has come to represent?

The magazine did not exclusively target Islam, it is true, but all offensive religious satire was not created equal.

First of all, as previously mentioned it is blasphemous in Islam to depict religious figures in any manner—not so in Christianity (this week’s magazine also included a piece on Jesus).

Second, I have found much of the content published over the years in Charlie Hebdo to be deeply offensive, and I wonder at the degrees to which the global community chooses to become outraged. For example, what would happen if equally offensive images were published, but with anti-Semitic content in lieu of anti-Islamic? 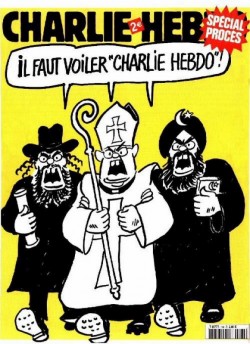 No need to speculate; that is precisely what occurred in 2008 when cartoonist Siné wrote an anti-Semitic comment regarding Sarkoszy’s son’s upcoming marriage. Then editor-in-chief, Philippe Val, fired Siné. French law prohibits Holocaust denial. You go to jail for publishing content that would deeply offend Jewish readers (like me and my family), but we support the same when it concerns Islam. Isn’t that just a little bit hypocritical.

The most recent cartoon depicted militant leader Abu Bakr al-Baghdadi, but we cannot view it as an isolated image, for it emerged in the context of years of satire targeting all of Islam. Challenging fundamentalism I understand. Attacking extremism makes sense. But an entire religion? If it weren’t Islam, would it have ever been allowed to go this far?

What is the difference between selective outrage and discrimination?

Where is the line between bigotry and laïcité (secularism, Fr.)?

Well, from where I sit it looks like it depends on who we’re talking about, and that’s a problem.