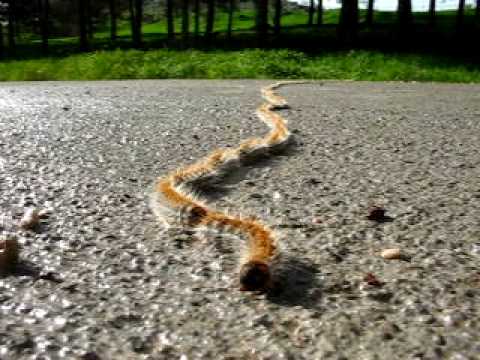 As someone who enjoys the gift that is the great outdoors, I sacrifice most Saturday nights on the town in order to rise early each Sunday morning.

I walk my three dogs and then join my friends on a mountain walk in the Costa Blanca area of Spain, where I am currently blessed to live.

On this particular week’s walk up on La Vella, part the mountain range in the Orihuela area of Valencia, we came across a magnificent example of nature at work: a line of processional caterpillars, native in some areas of Africa and mainland Spain.

Processional caterpillars travel, as is suggested, in procession, head to tail, towards pine trees where they nourish themselves on the needles before burrowing underground to pupate into moths within a day of releasing themselves from their nests, high up in the surrounding trees.

These amazing creatures, who spend just a few weeks as caterpillars roaming freely, have a protection mechanism quite like no other, one which can be deadly to small animals and children. They have a row of spines on their back which can be released into their enemy’s skin, causing a severe allergic reaction. Because of this they have fallen victim to humans and to the destructive and dominating side of our nature that is proving successful in the eradication of many species around the world.

When making the discovery of the caterpillars I was alarmed, as were many of the group, when a member chose not to walk around or over them but to grind them into the forest path with their walking boots, proclaiming they were a great risk to us and a threat to nature.

“How is that so?” I asked, as their untimely death was issued. “Surely our job as human beings is to protect and respect all species, particularly when it is in its own habitat?” I was given no answer to my question and was left with a sickly feeling in my stomach as the rest of the procession walked round in circles of confusion, their simple pattern of survival broken, their death also inevitable.

As I pondered on the—in my opinion unnecessary—killing, we proceeded through the forest.

Closely we walked one behind the other, each watching the person in front to make sure they didn’t slip or leave our own human procession, that kept us feeling safe and looked after as we carried on to our destination.

“Why do we think we are more important than all other creatures?” I thought to myself. “Is it due to our perceived superior intelligence?” If so, it is clear we do not use it in wisdom, nor for the good of all.

The processional caterpillar as an example, is fully aware of its role within nature, it does not seek to use its powers to harm but only to protect when there is no other option. It does not leave the safety of its environment to destroy or damage, it has a purpose and it fulfills it, completely.

It is quite clear that as humans, we act with less intelligence. We choose what to destroy and what to nurture depending on its value to us, believing that we are the most important beings on the planet and that everything has been put here for our own personal use or abuse.

The fact is we are all equal and deserve to be respected by our own and other species. There is nothing on the planet that is more significant than the other in playing its part, large or small.

We take more life than any other creature, yet we perceives ourselves as victims of the world, not predators. Surely we are the ones who are dangerous? We make decisions with our own set of personal values that have been developed based on monetary worth and that of the ego, believing that power over others and financial wealth will create everlasting happiness.

This is an illusion and the reality is now being seen.

As the aftermath of years of destruction is proving irreparable, we are realising money can never replace landscapes, reverse ecological damage or bring back animals that we have eradicated due to our greed for their flesh and skin or just the places they were born to roam.

We are a part of nature, but we are fast becoming its enemy and so our own enemy. We are constantly seeing it rebelling through tsunamis, earthquakes, volcanic eruptions, cyclones, typhoons, hurricanes and forest fires which usually end in the tragic loss of many lives. As we unbalance and destroy the earth, believing that we are indeed superior and a force to be reckoned with, nature retaliates in a way that should make us realise we do not own it. We will never be as powerful as nature and last but by no means least, we are its biggest threat.

Everything that is here on Earth is essential to its existence, no person, no creature, no flora or fauna is more important than the next. We are small pieces in a big picture that consists of everything we need to live in peace and happiness without the fear we are currently experiencing.

In realising our true status, we can feel a renewed sense of empowerment to fight for our home and use all the intelligence that is bestowed upon us to a great advantage.

Our intellect can be used as we grow in wisdom and awareness to relate to and treat everything around us with love and compassion. We need to realise that we are all as one and fragmented like a jig saw puzzle only by our different roles, never by our significance or perception of superiority.

We can be our own saviour and that of all others, by simply knowing and acting in accordance with the knowledge that everything has its purpose and that dominance, cruelty and fear will never comfortably have a place in our hearts or the world we live in.

Let the behaviour of the processional caterpillars and our current attitude towards them bring to light a self-awareness of our responsibilities and capabilities within the world.

Everyone can make decisions as to how we would like to treat and be treated. We must understand that collectively we have a great strength, one which can do good and bad. Whichever one we choose, will have repercussions for every living thing, including ourselves.