Let Go of Your Travel Agenda. Organic Adventure Will Catch You. 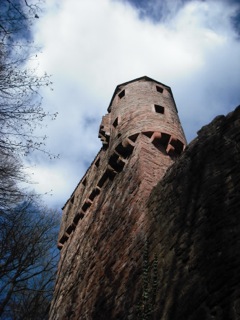 We were back in Germany—this time with two kids in tow—and I should have anticipated the scene in front of me.

Any signage stating points of interest with Schloss (castle), Feste (stronghold), or Burg (fortress) sent our car careening in that direction as if driven by the giggling youth in the backseat. It couldn’t be helped.

Without exception we would climb to the upmost height of the ruin, up the cramped damp spiral stairs to the lookout tower. Without exception the children would beat my husband and me to the top, where in their imaginations they would declare the takeover complete.

As a young childless couple, we’d lived in Germany where our first child was born shortly before we returned to the USA. We seized on this particular spring break to introduce our now 10-year-old daughter to her birthplace and show her and her seven-year-old brother our favorite haunts.

Keeping in mind that school-age children like to run free and not be confined to a regimented traditional sightseeing tour, we loosely plotted our trip around familiar places and sentimental landmarks. We weren’t stupid.

But it was precisely this flexibility that gave the kids the wiggle-room they needed. And they took full advantage of us. They fully transformed our time in Germany into one of conquering towers, the overarching narrative now rooted in their memory from that unforgettable trip, a narrative signaling a complete departure from our travel plans.

I confess I’d hoped our kids would enjoy stepping squarely into those footprints my husband and I had made years ago. Instead, there grew to be a huge dancing mess of little prints around the larger ones because unsurprisingly, they insisted on making their own footprints.

Our country drive to the famous casino-spa town of Baden-Baden was filled with pristine views and quite relaxing if one could ignore the daredevil leather-clad motorcyclists that would appear out of nowhere and pass in a blur. We parents enjoyed the view; the kids reveled at the German cyclists’ death-come-hither speed.

Our hotel right in the center of Baden-Baden made walking the old streets easy and the only driving required was to the old castle Hohenbaden, circa 1120, now a ruin one can freely explore. That is exactly what we did.

Did I mention that we explored every possible ruin to its uppermost tower? Ruins which––unlike American historic sites—lacked the warning signs, the guardrails, the attendants and guides. There were no disclaimers posted, no emergency phones installed if help were needed, no brochure map to navigate the castle ruin’s maze. In short, kids sprinting from dungeon to teetering tower were solely under the protection of their parents. We kept a close eye and were frequently winded in the process. Hide-and-go-seek was a challenge I’d rather not repeat.

I could see that my fear of heights was also to be sorely challenged on this trip that the kids had re-designed right under our noses. Figuratively, though, the kids were holding my hands. In chasing after them, I was more apt to forget to be afraid. They were coaxing me not to succumb to the bubbling anxiety I felt over the great distance that lay between the earth and me. Their free-spiritedness and sheer enjoyment of the moment begged me not to worry about someone getting hurt but to instead catch a glimmer of their joy.

So, I followed. By their example, I focused on putting one foot squarely in front of the other. One step at a time. This allowed me to join them at the top and enjoy the fruitful rewards of a breathtaking landscape only visible to those who have taken the needed risks.

Time and time again, the view was ample payback. Looking out and away, I found new appreciation for the pastoral German landscape. But the kids didn’t allow for interminable gazing. One step at a time, I scrambled back down to earth after them.

And so it was. One step at a time, one tower at a time.

We leisurely made our way to Heidelberg, the famous university city along the Neckar River which boasts one of the world’s most photographed castles. We checked into the Goldener Falke, situated right on the Marktplatz (city square) with the grand city hall and the old cathedral visible from our window.

Heidelberg would have been incomplete without a visit to its famed castle, the only official tour we took. But it wasn’t an epic moment for the kids. The clean, orderly tour construct cramped their style, restraining their ambitions to rout out the invisible enemy. The renowned castle paid dearly for it—the kids gave the castle an embarrassingly low rating in their private evaluations.

What was least rewarding for the kids was proportionately costly for the parents. Lesson learned.

One day we headed out by car along the Neckar River to visit the fairy-tale town of Dilsberg, a hilltop medieval treasure complete with thick walls and a tower. Naturally, we climbed the tower. Years earlier, my husband and I had admired the view of the Neckar Valley from the elevation of the town itself. It had been gift enough, we had explained to the kids.

Not so today. In jubilation, the kids demonstrated that the view was even more spectacular from the top of the tower. Had we insisted on our visit to Dilsberg perfectly mirroring our past itinerary, we wouldn’t have known about that spectacular view.

It was a timely reminder that if one isn’t careful, there is the danger of allowing memories to compromise the present. Today’s experiences, after all, are tomorrow’s memories. Not leaving adventure a chance to surprise and engulf probably means missing out on potentially the richest of memories.

This knowledge shook me anew.

As we drove back along the twisting river towards Heidelberg, a sign beckoned—Vier Burgen (Four Fortresses). We didn’t hesitate and it opened up the greatest hike of our trip, a well-marked trail that led past four historic sites strategically perched high on the hill. We followed the rustic markings for the Kunstweg Neckarsteinach path through the woods until we saw our first fortress to explore: Burg Schadeck, circa 1230.

After vanquishing the invisible forces and establishing order, our kids led us deeper into the woods with the help of a faded sign where we spotted Hinterburg, circa 1120. Again, following our fearless leaders, we climbed to the topmost point, gaining an unnerving view far below of the snaking Neckar. Mittelburg and Vorderburg were privately owned (note signs: Privat!) and didn’t require conquering, much to their disappointment.

Before heading to Frankfurt to catch our return flight, we spent a couple days in Weinheim, a charming town. Nonetheless, memories of tense late night dinners in various restaurants with my husband’s colleagues invaded my thoughts as we walked the bustling Fusgagerzone. Time had mercifully eased the memory of the strong challenges of the workplace that so affected our time here long ago.

But the kids were deaf to our stories. They were busy exploring our accommodations at the family-owned Goldener Pflug. They were smitten by our suite on the second-floor of a 300-year-old barn behind the main hotel. It required a climb, too, though a safe and easy one thus disqualifying it from the grand inventory of tower victories.

Apparently, German ruins of every kind—according to the kids—require a compulsory climb of every variation.

Like this trip crystallized, letting go of our travel agenda allowed adventure to arrive unanticipated. They arrived as challenges to stay flexible, practice humility and yet laugh. The result? Organic adventure. Thanks to the kids, a more muscular picture of Germany developed. And, a closer, more muscular family emerged. Ribbed like never before, we were evidence that this adventurous and oftentimes dangerous German tower-climbing had clearly proven beneficial.

Now when the kids talk about Germany, their eyes take on a dreamy, far-away shine: “Eleven. We captured eleven towers.” And then they beg to go back. 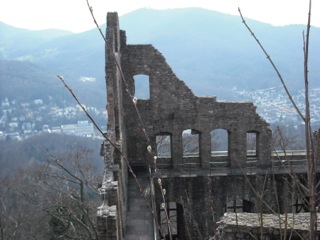 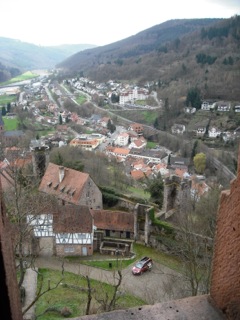 A shorter version of this story first appeared under the title “Strength Training: What Travel and Adventure Did For Our Family” at Great Moments in Parenting.

Three Steps to Making Every Day an Adventure. 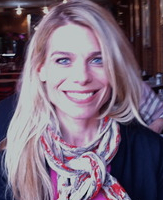