What Imagination Literally Means, and How to Use it. 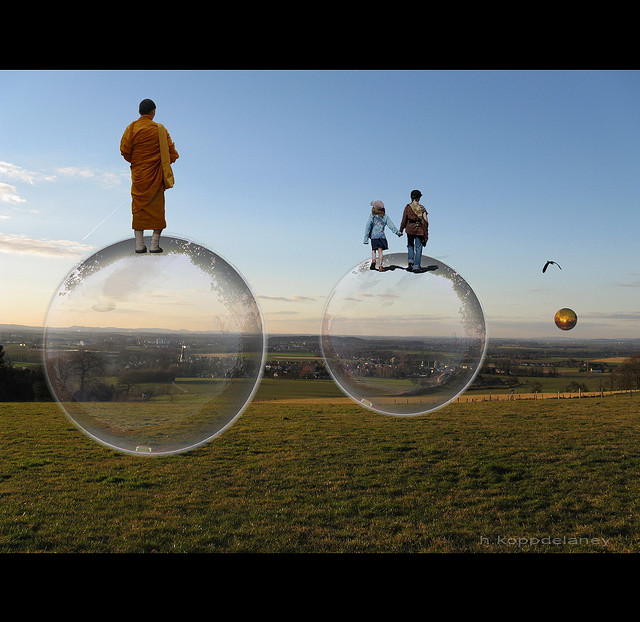 Choose someone. It could be your neighbor, a colleague, or anyone where the bond is not too deep.

Close your eyes and picture them. Everyone can recall a face. Notice how you see them. Are they happy, sad, ugly, beautiful?

How are you imagining this other person into your world?

Take some time to play with it.

Imagine them as an angry enemy. Take a feeling of injury and fill it into the face you are imagining. Let it go, and imagine them as an undiscovered channel of peace and love. How do the images change? Are we especially attracted to one portrait over the other?

This time, wish them well: that life will be good for them. Wish it with your heart, with your blood, with your gut. Let the wish come from the bones of your body. Stop, and see the image that appears.

Imagination is the phenomena that comes forward when the dimension of awareness (which moves through the vibration of feeling and emotion) blends with the dimension of consciousness (where we engage or disengage from the world of form).

To give an example: if we are feeling unwelcome or rejected, this feeling will rise to the level of our mind. Here, we will build stories with our thoughts, telling and retelling the truth in an attempt to bring the feeling to peace. But also here, in our struggle to find the boundaries of who we are, we engage our visual mind. Pictures arise, which give our stories reality. They are key to the way we compose the movie of our life. Often, we become slaves to these pictures. Sometimes, a picture can be so strong that the only accompanying thought is as brief as a caption.

Is imagination good or bad?

Imagination is often an asset, a great ability, which nevertheless should be treated with care. It is great to be imaginative but, if we imagine too much, we send the boys in white suits.

As such, our ability to imagine is contained and restrained by degrees of fear. Imagination—arising spontaneously in the mind—moves beyond our control and can threaten our sense of comfort with our habitual patterns of perception. Often arising with a sense of reality that can be even more real than the reality of our eyes and ears, it can bring shock waves of fear.

Is this psychic? Am I getting a message or a warning? Or am I losing my mind?

When we begin to imagine—at any level—we begin to use a different faculty of mind. We move out of the “safe” zone of cause and effect (this happened and, because of this, that happened), and there is consequently a loss of control. In its attempt to get a picture or an oversight of what is going on, the mind offers a 3D perspective, not depending on past or future, but as a portrait of “how it is”. This image offers a form that can give us direction. Something which was alive, fluid and formless is now fixed and stabilized.

But this image is not “how it is”: It is created through our deepest wishes and sometimes by our worst nightmares.

Image derives from “mage”, an archaic word for magician.

The word imagination is composed of two elements: the “I” (that aspect of perception that moves through consciousness in order to create and define form, identity, self), and “Mage” which refers to magic, or conjuring.

As such, our imagination has the power to affect our world, our experience and our state. When the “I” is not mastered, it seeks form, trying to find itself through structures, and even creating structures in order to declare: “This is what I am”. As such, it invests structures with its own life, and becomes caught there. Fear arises, as a belief is born that if the structure which is “I” collapses, the “I” itself will be lost.

The motivation of the “I” to seek form in its purity is a natural part of the service of being human. Living through vibration to the densest level of matter, our willingness to let ourselves sink into the human and physical dimension is a fundamental part of our purpose.

Yet this depends on the “I” being free to engage and let go. The more it has remembered that it is never ultimately “caught” in the world of form, the more it is able to engage without fear. There is no danger of getting “stuck”.

So we see that those with the greatest imaginations are often those who have released much of the fear around insanity: Albert Einstein (“Imagination encircles the world”), Isaac Newton, John Lennon, Leonardo Da Vinci, to name just a few of the world-changing magicians of our time.

Their imagination became free to be of service, as it has been realized as non-absolute, playful and in no way dictating an ultimate reality of self or universe.

It could be even said that, in the deeper layers of imagination, reality comes forward with more intensity than in any “normal” moments of open-eyed sense perception. Through realizing imagination, we begin to realize the dream states of who we are and what is real. Ironically, in imagining, we begin to wake up. In this awakening, we are liberated to be of service to those images or illusions that serve the good of the whole; we begin to shape our world inside-out.

At the source of our greatest fears is the use of imagination against us.

Let’s say a group of people have decided that because you have a particular shape or are in a particular state, you should be condemned. You might be well aware of your eternal life, yet it seems impossible to take form in “this” world. The imagined reality being bombarded towards you has such a strength that you could even feel like killing yourself, or killing this “thing” that the “reality” of the world has put upon you. At least then you would be free.

This is the destructive power of projection—when we imagine the form of the other as ultimately separate from ourselves and, for whatever reason, decide it has no place in existence: when we imagine ourselves as “other” from whom we really are.

We project onto the screen of experience because we are wounded by the same movement towards ourselves, and because we are addicted to a war of form, internally or “externally”.

We feel the agony of rejection, and “we” work like hell on “ourselves” to create a stronger form (and a weaker one for the “enemy”) which we project back. In this field of delusion, defensiveness and rejection, many come to a habitual mental space where “the best defense is attack”. Even before we meet the blind date, the projection (and rejection of what is there) is formed.

In many ways and on many levels, we imaginatively project our own rejection from the whole.

As the antidote to rejection is acceptance, the key is not to reject imagination, but to welcome it when it is there and to let it go. It gives information—it is a snap-shot of a state—but it says absolutely nothing about who you are at source and, still less, who the other is.

Why? Because you are not the image you see; you are the one seeing. You are not that which is seen. You are always the one that sees.

You are not the projector that casts the image on your mental screen; you are the light. You are not even the light that allows projection; you are the indestructible, fine space that allows the light to travel through, between and within each image and moment of perception. This is not abstract – it is absolutely everywhere and more intimately known to you than every idea “you” have of self.

When this is allowed, the field of projection is no longer a curse but an opportunity. It is a field where creation is possible, and where the emergence of beauty is allowed.