Sometimes not Even the Pure in Heart can Keep their Vows. 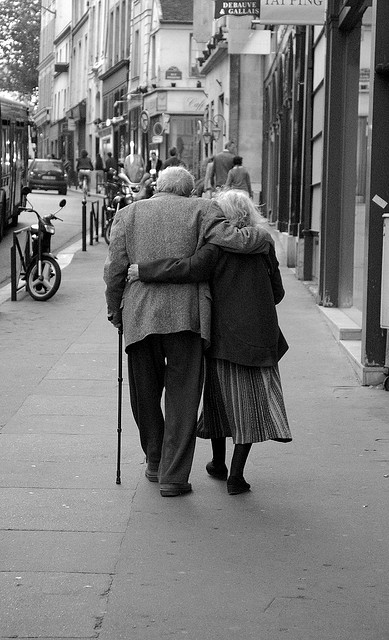 The first time I saw that characteristically Parkinsonian hitch in my husband’s walk I was sitting in the front pew of the African Methodist Episcopal church he had been a member of for 10 years.

From there, I could easily turn around and watch as he marched down the center aisle with the choir.
My husband called his church “a jumpin’ church” and always said he loved it for its soul-grabbing, foot- stomping gospel music.

There he was that Sunday morning, marching in with the other baritones singing—“…It’s a highway to heaven…” —, his white face even whiter in the center of that great black stew, his right hand slightly frozen in place, his left foot dragging.

I watched as he stumbled his way up the aisle and when the choir sang “None can go up there ‘cept the pure in heart,” I felt they were surely singing about him.

By the time the choir finally took its place behind the altar it became obvious to me that not only was he dragging his foot, but he was also the only one unable to clap his hands, the only one unable to sway side to side with the music and the only one wearing the expressionless mask of Parkinson’s disease– a progressive neurological disorder that prevented him from smiling, from blinking his eyes or even from wrinkling his brow.

From the choir loft I could feel his eyes searching for mine but I looked away, avoiding his gaze.
I was afraid—afraid that he would see my mask—the Parkinson’s-Scares-Me mask that was frozen on my face.

It wasn’t supposed to be like this. This was my second marriage.

I had married a man who was younger than me, and I hadn’t bargained for anything at all like Parkinson’s disease.

I always had a tendency to jump into the future in my life and my husband’s diagnosis didn’t help matters. It gave me bedtime anxieties riddled with scenes of watching him waste away all the while I was bathing him, shaving and dressing him and helping him to eat without choking. Even though the things I laid awake fretting over hadn’t yet happened, I would toss and turn in a feeble attempt to reel in my wild untamed mind.

How many times had I heard that sage advice to “stay in the moment,” “… stay in the moment”? Certainly if I wanted something to pull me out of the proverbial moment, Parkinson’s would be happy to help.
I would lie in bed, trying to sleep, my chest feeling as if it were encased in a steel vest, and begin a litany of thoughts:

I need to stay strong. I need to be able to do all the man things—climb up on the roof, chop wood for the fireplace, haul the trees away. Can I manage? Should we sell the house? I’m already older than he is now, I’ll be even older then.

The obsessive little monkey that lived inside my head took over, swinging gleefully from thought to thought in that fertile jungle of anxiety.

I had gone to church that Sunday morning at my husband’s special request. Sunday morning church services hadn’t been my cup of tea since I had poured out the dregs of my Catholic upbringing over twenty years before.

The music stopped and the church took a collective breath.

Women fanned themselves. Some sat down.

What would my prognosis be?

I was terrified that being a caregiver for a person with Parkinson’s Disease would steal what was left of my youth and that the thief that would take my husband’s life would also take mine as so much collateral damage. Shame on me and my self-centeredness. But there it was.

And when I stopped crying, I looked at myself and at who I was.

Could I do this?

Could I, as the words go, stand by my husband in sickness and in health? Was I made of the integrity and true grit that kind of long haul required?

All around me I could see people taking care of their loved ones. Did any of them think about saying they didn’t think they could do it or that, no, they didn’t want to do it?

My meditation teacher, who was a Catholic priest as well as a Buddhist Roshi, had told me one time, “God wants to meet you in intimacy to become acquainted with you fully. But you have covered yourself in stone.”

I guess I was lucky. I felt like I had been cracked open.

Back in the church, the preacher called out, “God is good.”

I saw my husband raise his hands, close his eyes and tilt his head in surrender to the preacher’s prayer.
The musicians thrummed and thrummed the last bars of a hymn.

The preacher went on, exhorting, “Somebody say ay-men.”

I heard my husband’s voice from among all the others. It was shaky and frail, but I could still hear it.

Fifteen years later, both he and I now have new marriages and new lives.

I look back at this cracked-open time of struggle to know myself, to know the depth of my commitment and to know what I was made of. The most I can say of it is that I learned that the highway to heaven is strewn with people just like me—people who are pure in heart, but who can’t always go the distance they thought they could, no matter how hard they try.

I can still see the preacher in my mind’s eye.

“Somebody say ay-men,” he calls out again.

From deep inside me come the words.