Talking to Strangers: The 85-year-old Hitchhiker. 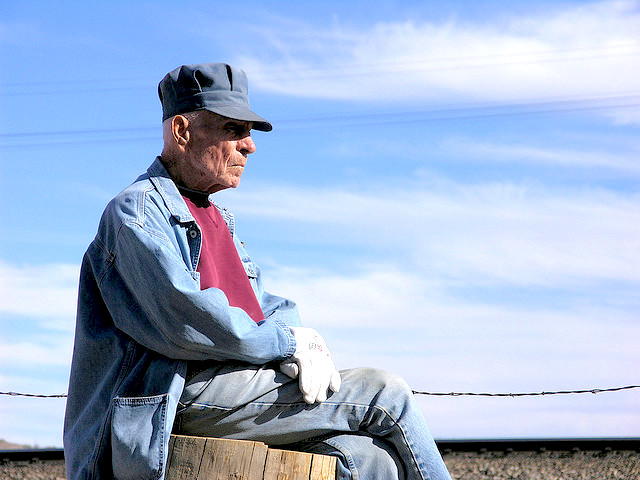 It was a hot, sunny day in Tucson, Arizona.

The sky was its usual bright, blue and I was heading home from an errand when I saw a man standing with his thumb out on the side of the road, hitchhiking.

“You are never too old to set another goal or to dream a new dream.” ~ C.S. Lewis

Nobody hitchhikes anymore, I thought as I passed him by. Particularly nobody that age. He looked old enough to be my father.

He had on one of those old square cut baseball caps with the mesh sides, a thin, faded t-shirt and pants that were held up by suspenders which, with his Buddha belly, he definitely needed. On his feet were a beat up pair of old cowboy boots and a canvas bag of some sort hung from his shoulder. To top it all off he was leaning on a cane.

Never mind his accoutrements, there he stood, resolutely, with his free arm stretched straight out in front of him, thumb raised as if to say, “You better believe it, this old man wants a ride.”

I couldn’t get over his chutzpah and pulled over.

He waved and started towards the car but I could see it was going to take a long time, even with the cane, and decided to make a u-turn and go back to get him.

Turned out, the old hitchhiker was 86-years-old and his daughter had taken his car keys away from him, saying he was a menace on the road—and by the way, would I like some fresh bread from the bakery, he had some in his bag—and he wasn’t going to let the fact that he didn’t have his car keys stop him from getting to where he wanted to go and thank you for picking him up, all in one long drawn out breath in a country-like accent.

I told him he looked too old to be an axe murderer and that was why I picked him up—I was only going to the next intersection before I turned off. He got in the car and said he’d take his blessings any way he got ‘em and that he’d catch a ride from there. He was “real good at catchin’ rides.”

Yeah. He’d done it before. Lots.

“But in them days people stopped more than they were stoppin’ today.”

Today, he’d been standin’ there for about an hour and you’d think all them other people would be like me and realize he wasn’t no axe murderer.

“Too bad though. People are afraid today,” he said—and by the way, did I want some fresh bread—and oh yeah, he’d already offered me some.

I asked him where he was going and he told me that it was like this here—he’d met a gal.

I told him I knew there had to be a woman involved.

“Now how would you know that?” he asked.

“I could tell from the way you were stickin’ your thumb out,” I teased, “had to be a woman involved.”

He chuckled, explained as how he’d met this “lady” at church and he kinda liked her right away. She were just, you know, a fine woman, a woman with a laugh and he wanted to git to know her and then she fell and broke her hip and she couldn’t drive for a while and he had been visitin’ her and then his daughter took his car keys away.

And I told him he took the words out of my mouth and he pointed and said I could drop him off at the corner up ahead.

I pulled the car over and he asked me if I minded if he prayed for me.

“Amen,” I said—wondering to myself when was the last time I actually said, “Amen” and he got out of the car.
Just before he closed the door, he leaned down and shot me a beaming smile that made me think I could almost see the boy in him.

I looked at him. His stained and stretched t-shirt, his faded pants, his beat up cowboy boots, cane, canvas bag and my heart actually lept a little bit in my chest for him, for his agelessness and for his nerve.

He shut the door and I drove off.

In my rear view mirror I saw him take his stance. Arm straight out. Thumb boldly in the air fully expecting someone else to give him a ride.

A ride that would get him even closer to his new life.

5 Reasons to Pick Up a Hitchhiker.