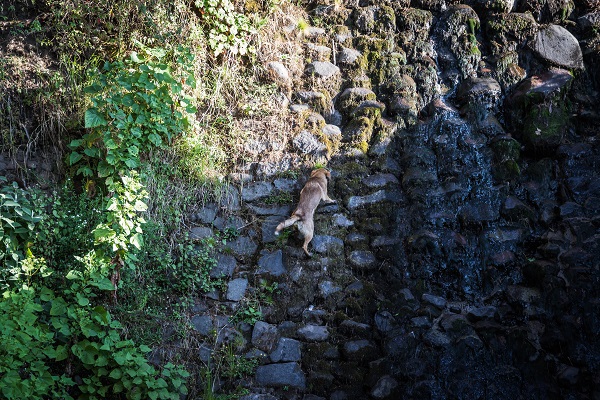 I have a friend who lives his life in technicolor.

I’m continually impressed with his endeavors and globe- trotting lifestyle as he engages in and organizes marathons and races such at the recent Death Race in Amecameca, Mexico, near the Popocatepetl volcano.

As impressed as I am with the whole idea that anyone would want to participate in anything which includes the word “death,” I am more fascinated by the stray dog that ran the race alongside some extremely brave athletes.

The Death Race, to give you a bit of background, began with nine friends in Pittsfield, Vermont in 2006 as a bit of a suffer fest. It has grown to a winter/ summer and an international event. My friend Johnny has since been involved with the evolution of the race as Race Director to include far less macho screaming and a more motivational/spiritual growth aspect by having participants memorize and recite quotes to inspire themselves toward the finish. This is very civilized, keeping the mind engaged in something other than the absolute grueling conditions of the race.

This year, 48 athletes started the race—30 were from the US and Canada, and 18 were from Mexico. Four were lost to altitude sickness before the race began at 12,000 feet. Twelve racers finished: four women and eight men, two of those from Mexico. And one dog.

He must have smelled the frozen fish each racer carried in their backpack, to be cooked and eaten at the end of the race, or he simply craved human attention. I’d say both. He was found hanging around the parking lot where the racers gathered. How was he to know that the good men and women there were about to stare death in the face while navigating the grueling course?

He was simply a sweet, loving animal who decided to accompany some humans on their adventure.

Perhaps he was the animal totem sent to rally the troops, to offer inspiration and joy as he did his best to keep up? He followed the athletes up a waterfall, through rock slides and brambly fields, a 30 foot deep, dry riverbed, where it was expected that one would pick up heavy logs and lug them out of the quagmire. Rock slides, night conditions, exhaustion, dangerous scenarios—all did nothing to discourage the dog who stayed by their side. 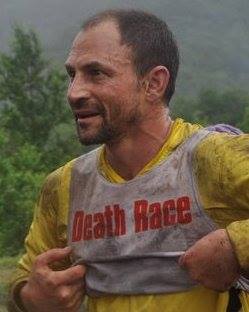 (Pictured above: Johnny, participating in a previous Death Race.

I wasn’t there but I can imagine what the sight of the dog keeping up (despite many challenges) did for the men and women who needed every bit of encouragement.

And what happened to him after the race, after some fish and many a loving head rub for being such a loyal companion? He was adopted an employee of the venue where the race was held! And after that? The volcano exploded! (If you would like to know more about the Death Race, and read one person’s blog about their experience, (the photos of the conditions will blow your mind!), please follow this link to the site of Abe Green who survived it all.)

I leave you with a few quotes that, memorized and spoken throughout the race, did much to inspire the souls of those who ran against all odds. At the end of the race, each man and woman was asked the one thing they could now change in their life. Inadvertently, they had changed an animals existence—that’s a big thing.

It’s only when we truly know and understand that we have a limited time on earth—and that we have no way of knowing when our time is up—that we will begin to live each day to the fullest, as if it was the only one we had.” ~ Elisabeth Kubler-Ross

Your life feels different on you, once you greet death and understand your heart’s position. You wear your life like a garment from the mission bundle sale ever after—lightly because you realize you paid nothing for it, but cherishing it because you know you won’t ever come by such a bargain again.” ~ Louise Erdrich

“When we finally know we are dying, and all other sentient beings are dying with us, we start to have a burning, almost heartbreaking sense of the fragility and preciousness of each moment and each being, and from this can grow a deep, clear, limitless compassion for all beings.” ~ Sogyal Rinpoche

“We say that the hour of death cannot be forecast, but when we say this we imagine that hour as placed in an obscure and distant future. It never occurs to us that it has any connection with the day already begun or that death could arrive this same afternoon, this afternoon which is so certain and which has every hour filled in advance.” ~ Marcel Proust

“Of all the wonders that I yet have heard,
It seems to me most strange that men should fear,
Seeing that death, a necessary end,
Will come when it will come”
~ William Shakespeare (Julius Caesar)

“Almost everything–all external expectations, all pride, all fear of embarrassment or failure–these things just fall away in the face of death, leaving only what is truly important. Remembering that you are going to die is the best way I know to avoid the trap of thinking you have something to lose. You are already naked. There is no reason not to follow your heart.” ~ Steve Jobs