Daring to Bare it All: My first Underwear Run. 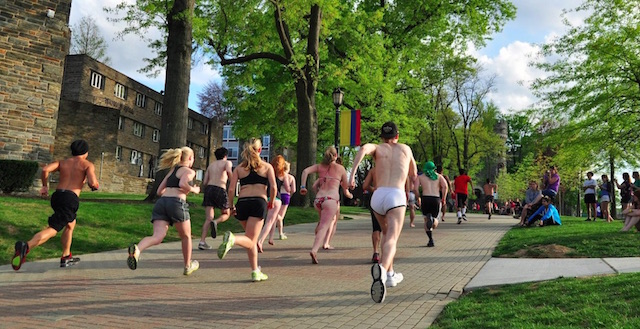 Right up there on the list of terrifying dream clichés is standing before a crowd—only to realize I’ve got nothing on except my underwear.

On my first day at a new school, I made that dream a reality—standing before a laughing crowd and flashing cameras stark naked except for my tighty-whities.

And it was awesome.

It was my first underwear run, where one literally donate the clothes off of their back to charity and run in their underwear.

But why not just donate without stripping? Well, if we see people running in their underwear, we will ask, why—perfect conditions for spreading awareness.

“The idea of running around in your undies just seemed like a no-brainer,” said Bobby Gill, co-founder of Cupid’s Underwear Run. “Judging by the millions we fundraise each year, it seems others agree. Ultimately, people are looking for an excuse to let their hair (or pants) down.”

I’ll attest to that. I was definitely excited to let my pants down and proudly display my answer to that eternal question: “boxers or briefs?”

Naturally, anyone in public in their underwear is going to be a teeny bit self-conscious. But as a teenager, even being in public fully dressed made me uncomfortable—it felt like everyone was staring at me and laughing.

My anxiety wasn’t just ordinary adolescent awkwardness. During that time, my parents got divorced. Dividing expenses was a battle and created extreme financial instability.

I lived with my dad throughout the ordeal, and while he struggled to support his own household, I grew like a weed. My clothes stopped fitting, but we couldn’t afford anything new, so my wardrobe drastically downsized. Classmates noticed that I always wore the same clothes and ridiculed me.

Maybe everyone just thought I was a slob. Truthfully, I lacked a lot more than just style. Every utility was turned off at my house, at one point or another. No electricity meant getting a taste of Amish life and doing homework by candlelight. One whole winter I wore a coat and gloves to bed because our house didn’t have heat. Every morning started with a freezing shower.

Eventually, we couldn’t afford food anymore. We offered sacrifices to pawn shops to put dinner on the table. The relief was short-lived, as the next day amounted to life in an emptier home. Soon, we were in danger of losing the vermin-infested house altogether.

I never told anyone. At best, they wouldn’t understand how bad things really were; at worst, my shame might become a weapon in their hands. So, I stayed silent and accepted loneliness as another cost to endure.

Stripping Away the Shame.

“College is tough and stressful, especially around finals,” said Ryan Tisinger, co-founder of Undie Run (who’ve collected over 200,000 pounds of clothing since 2006). “[That’s] why Undie Run serves as the perfect cathartic release. Think of it as an alternative group therapy session.”

I guess therapy is why the underwear run appealed to me; it was a chance to shed the burden of my inhibitions. Ditching my clothes in front of strangers sounded easier than divulging my personal life.

But hitching up some classic tighty-whities at home couldn’t prepare me for the terrifying awkwardness of unveiling them on my first day at Arcadia University. While my fellow exhibitionists stripped down, I nervously glanced around campus as onlookers gathered to watch our impending race. There was no judgment, though—only shouts of voyeuristic encouragement and whoops of approval.

My heart pounded as the coordinators counted down for race time. I assembled behind my competition’s toned asses, and when the organizer reached zero, I bolted. Each step made my shame from years ago feel further behind. I passed the other participants in a blur until, unbelievably, I was in first.

Then my body reminded me I’m no athlete and had to stop to regurgitate into a trashcan. I recovered as a girl in a bikini ran past, leaving me in last.

“Finish strong!” a girl among the crowd shouted as she saw me struggling to catch up. She ran alongside me, an impromptu drill sergeant refusing to let me quit. I could barely breathe, but fear of wardrobe malfunctions aside, I finished it like any other race. Including the whole me coming in last part.

Yet, as I crossed the finish line and was dislodging a bout of runner’s wedgie, I felt surprisingly comfortable amongst the applauding crowd. For years I’d feared being laughed at, but in that moment, everyone staring at me and laughing wasn’t in my head—it was real. And it was liberating.

My therapy concluded with some amateur underwear modeling for anyone with a camera. I flexed my (nonexistent) muscles and basked in the freedom of vulnerability. That’s when I knew I’d love Arcadia University.

Whether you struggle with poverty, or just strive to help, an underwear run is a great cause to participate in. Show you care by showing off your underwear. This isn’t “you-only-live-once” slacktivism. Calculating, everyone helped from the rapture-like scene of clothes left behind at the finish line, your own mother couldn’t fault this trend.

Arcadia’s underwear run became my annual tradition. And next year when I went nearly au naturale, there weren’t strangers laughing and taking pictures—there were just friends. Arcadia supported me from my tighty-whities to my graduation gown and helped me strip off something I’ll never wear again—my insecurities. 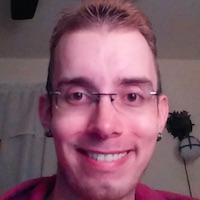