Girl-Power vs Gun-Power: Saving the Rhino from Extinction. {Video} 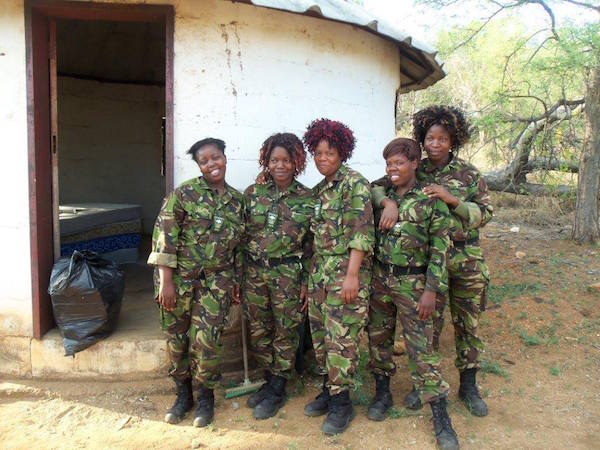 In a fight between a group of unarmed women and a gang of heavily armed poachers, who would win?

The Black Mamba squad is made up of 26 local women who patrol the Balule Nature Reserve, part of the famous Kruger National Park in South Africa. In the past 10 months they have not lost a single rhino, while a neighbouring reserve lost 23 during the same period.

Save the Rhino says, “Rhino poaching has reached a crisis point, and if the killing continues at this rate, we could see rhino deaths overtaking births in 2016-2018, meaning rhinos could go extinct in the very near future.”

Rhino horn fetches around $60,000 per kilogram: higher than the price of street cocaine and more valuable on the black market than gold. This value is fuelled by the mistaken belief in parts of Asia that the horn is a cure for cancer, among other things, and acts as an aphrodisiac.

Most people seem to believe that killing the poachers will stop poaching, but some voices on the front-lines of the battle to save the rhino say this is not the answer.

Bordering many wealthy private reserves where rhinos might find sanctuary are local communities living in grinding poverty. Many of the people in these communities have never seen a wild animal and have no knowledge of the value of the wildlife on their doorstep. Poaching syndicates offer them huge sums of money to kill a rhino and remove its horn—money that will allow them to feed and care for their families. These are the majority of poachers operating on the ground, and if they are killed there are more people from communities like theirs willing to take their places and risk their lives for the financial reward.

But what if you could educate and empower these communities to protect the wildlife instead?

Craig Spencer is an ecologist and head warden of the Balule nature reserve where the Black Mamba anti-poaching squad operate. The project was his brain-child.

“The problem really is that there is this perception that has developed in the communities outside the park, they see a uniformed official and think we are the sheriff of Nottingham, they see the poachers as Robin Hood,” he says. “We are not going to police the problem away. This war will never be won with bullets.”

Together with Transfrontier Africa, he hired 26 local jobless female high-school graduates from the local community, put them through intensive paramilitary, legal, tracking and combat training, and into second-hand military uniforms paid for by donations. They patrol the reserve night and day: a visible, but unarmed, police presence.

While their prime objective is anti-poaching, they are also working to create a strong bond with the local communities and educate them on the benefits of saving their natural heritage.

Although former soldiers and old-school conservationists had doubts that these women could effectively protect wildlife, this band of sisters has proved them wrong. The Black Mambas are the eyes and ears of the anti-poaching operation in Balule. They gather information from the community and act as an early warning system for potential poaching activity.

And they are fast becoming this team’s most powerful weapons in the war against poaching.

“Machine guns can stop poaching briefly, but these women are the ambassadors for conservation and the fastest conduit to educate children by installing a new attitude towards wildlife and conservation in their social circles.”

They have been so successful that they are in the process of expanding into neighbouring tribal trust lands with a further 12 female rangers. And as long as funds permit, they will continue to expand where there is a need.

When asked how they and their communities feel about the project some of the ladies answered:

“I love animals and protecting them. This is not only for men and it’s time men know this. We are willing to do the work.” ~ Nomuntu Mogakane

“Lots of people said, how can you work in the bush when you are a lady? But I can do anything I want. I am a lady, I am going to have a baby. I want my baby to see a rhino, that’s why I am protecting it.” ~ Leitah Michabela

“If we work together as a community we can work this out. People need to open their minds, their hearts. It’s not about money, it’s about our culture, our future.” ~ Collette Ngobeni

This is social upliftment, environmental activism and girl-power at its best.

Bonus: Rhino Gold—a documentary about the community of Hoedspruit, a small town in South Africa, and their extraordinary efforts to save rhinos from extinction. Watch out for The Black Mambas.