Kilograms & Inches: How being Called “Fat” affects our Well-Being. Last night, while engaging in my daily ritual of scrolling through Facebook before dozing off to sleep, I came across this poster, which bluntly said:

For about for ten seconds, I stared at the poster—which otherwise looked good. I was at a loss—I could not understand what to feel. Was it the fact that it was too “in your face,” or was it the sudden vision of my arms jiggling every morning as I water my flower pots?

I know I am healthy overall, although a little on the unbalanced side. I have my disproportions, but somehow they are fine and I love them. This sudden reminder that I am among the fatty lot made me panic. This was followed by sadness, insecurity and, finally, a bunch of fake resolutions.

Next morning, much of the panic had ceased to exist. As I sat thinking with my tasteless black tea, a revelation struck me:

What if all the people looked the same?

What if there was nothing called “fat” or “thin?”

Why did God make us different?

Why do we have to feel bad if we are fat?

Apparently, while my mind was taking the roller coaster ride, my fingers were equally spontaneous—typing “fat” in the Google search box. But today, instead of the usual “how to reduce fat.” I just typed in “what is fat?”

What is this chaos called “fat?”

As per Google, fat is “a natural oily or greasy substance occurring in animal bodies, especially when deposited as a layer under the skin or around certain organs.” Google also mentioned synonyms like cellulite and adipose tissue.

Wikipedia, on the other hand, states fat as “one of the three main macronutrients” essential for the body, as they “serve both structural and metabolic functions.”

Nowhere is there any concept of body shaming in the meaning or definition.

The funny part is when we come to the adjective usage of “fat.” When do we call a person “fat?” Again, Google says a person or animal “having a large amount of excess flesh” is fat. Some choice synonyms are used—like plump, stout, overweight, flabby, paunchy.

I realized that fat—in its core meaning—is not as demeaning as when used as an adjective.

Fat is biological. But a fat human is a societal construct.

“Fat” is such a label created by society. It causes us to wonder, every time we eat something, how many calories we have consumed and how many kilograms we will gain. This is because we have a body image ingrained in us from childhood, which dictates that being lean is beautiful—and if you look big, it’s not attractive.

So, how does being called “fat” affect us?

A mind full of insecurity—When we are called fat, the first thing that occurs is low self esteem. We start doubting ourselves. Instead of feeling amazing in that cocktail dress, we end up feeling bloated and ugly.

Low on confidence; lack of desire to face the world—Give me a corner; I would rather sit and drink alone than go out in the wide world. How can I be in the same frame with my skinny friend? I look so bad. Why would I go shopping? None of the clothes will fit me.

As a fat girl, I tend to lose confidence when somebody points it out to me. Is it really worth the pain?

Physically and mentally stressed—Being called “fat” separates us from the majority. We feel discriminated and often are left alone. That, in turn, affects our mental health. It’s not unknown for severe depression and suicidal tendencies to follow.

Since we are emotionally broken, we increase our intake of feel-good foods—which are often not the healthiest choices. It poses a great risk to our entire biology.

2. Yoga is extremely effective if you have just begun to exercise. Start with a Surya Pranam  (Sun Salutation).

3. Walk a mile or so after dinner and lunch to aid digestion. Lying down after a heavy meal will immediately add to the layer of tissues.

4. Do not drink water while you are eating. Doctors advise to drink half an hour after eating food.

6. Steamed food is good for health. In case your taste buds start rebelling, start with a reduction of spice and oil.

7. Say no to sweets—they are filled with trans fat, which will affect your heart and major organs.

Leering at a person and demeaning them by calling them names for being on the heavier side is unhealthy. If they are overweight in their BMI reading, help them. Imposing the skinny image is not good for society. Being fit is more essential.

Next time, when you say “paunchy” to describe a person, try imagining if you would be comfortable talking to a skeleton—with no adipose tissue—instead.

This One’s for my Fat Sisters 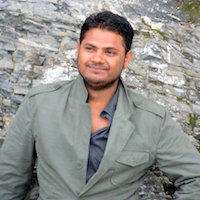 Anand Srivastava blogs at CBSE board 10th result and about best wine cooler and wine cooler reviews, and is a tech-junkie who believes in empowering businesses with newer idea… Read full bio