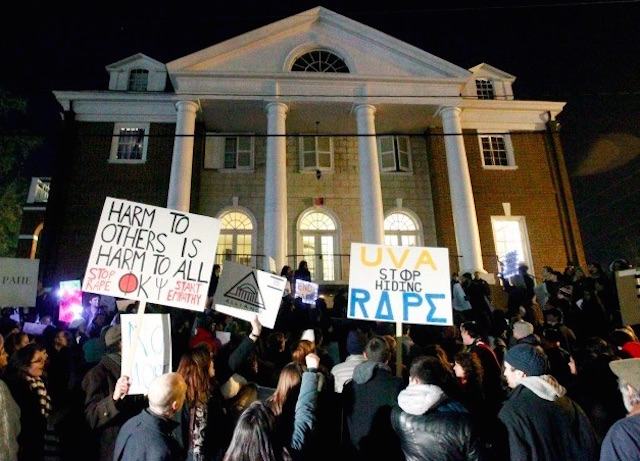 It’s only Tuesday, but it’s been a pretty bad week for Rolling Stone magazine.

Yesterday, The Columbia University School of Journalism released a scathing report about the many things that went wrong with the, now infamous article that appeared in the November 2014 issue of Rolling Stone.

The article, “A Rape on Campus: A Brutal Assault and a Search for Justice at UVA.” told the tale about a horrific gang rape that supposedly happened to a first year student, named Jackie, back in the fall of 2012. Shortly after it’s publication, the article went viral and “ultimately attracted more than 2.7 million views, more than any other feature, not about a celebrity that the magazine had ever published.”

It also brought considerable attention to the author of piece, Sabrina Rubin Erdely.

However, there was one problem with the piece—none of the allegations were checked out.

Indeed, by early December of 2014, thanks to extensive reporting by The Washington Post and others, the story began to unravel. Most damning of all, were the accounts by the three former friends of Jackie’s, who were quoted in the Rolling Stone story, but never actually contacted by Erdely, who gave a totally different version of events the night that the alleged rape occurred, than what the article reported.

It was also revealed that the alleged ringleader of the rape “Drew” was never verified to have existed, something that both Erdely and the editors of Rolling Stone were aware of when the article was published but failed to inform the readers.

After carefully reviewing notes, reports, and interviewing various people involved with the story, the Columbia report declared that the article was an example of  “journalistic failure.”

Worse still, it was “failure that was avoidable.”

“The failure encompassed reporting, editing, editorial supervision and fact-checking. The magazine set aside or rationalized as unnecessary essential practices of reporting that, if pursued, would likely have led the magazine’s editors to reconsider publishing Jackie’s narrative so prominently, if at all. The published story glossed over the gaps in the magazine’s reporting by using pseudonyms and by failing to state where important information had come from.” ~ Columbia University Report

In a nutshell, Rolling Stone didn’t just screw up. It screwed up majorly and the blame lies squarely with them.

While the magazine’s founder/publisher Jann Wenner told The New York Times that Jackie was “a really expert fabulist storyteller and something sits at her doorstep.” This doesn’t excuse the fact that at the end of the day, Rolling Stone dropped the ball on this and published a story that never should have run given the lack of investigation of facts.

Likewise, Wenner’s attempt to explain Erdely’s lack of professionalism by saying that she “Was willing to go too far in her effort to try and protect a victim of apparently a horrible crime. She dropped her journalistic training, scruples and rules.” is no excuse either.

While it is important that a reporter—especially one covering a topic as sensitive and emotional as that of rape—have empathy with her subject, they must never let that get into the way of facts.

No matter how believable a subject appears or how much they want to believe a story, a reporter must verify that what they are writing is true to the best of their abilities, and that simply didn’t happen here.

Also, while Erdely claimed that there was some sort of agreement between she and Jackie, that the former would not contact her alleged attacker lest the latter withdraw her participation from the article, the Columbia report found that there was no formal agreement between the two, and ” Jackie had made no request that they refrain. . . The editors made judgments about attribution, fact-checking and verification that greatly increased their risks of error but had little or nothing to do with protecting Jackie’s position.”

Erdely had an obligation, not only to reach out to the alleged attacker, but she also had a duty  to contact the trio of friends whom the article painted as unsupportive towards their then-friend, Jackie. Had she done either or had an editor at Rolling Stone insisted upon it,  then it would have been clear that there where major holes in the story and Jackie’s narrative would have been dropped from the article.

Even more disturbing is the problem of what the authors of the Columbia report call conformation bias which is “the tendency of people to be trapped by pre-existing assumptions and to select facts that support their own views while overlooking contradictory ones.”

In other words, and by her own admission, Erdely was looking for a dramatic story to highlight the problems of rape on college campus.

When she heard Jackie’s story, it appeared that this was exactly what she was looking for and this lead to her conclusion that UVA was somehow more interested in covering up rapes than getting justice for rape victims when in fact, existing laws and other factors made it very hard for the university to discuss sexual assault.

While Erdely did issue an apology the day that the Columbia report was published, it seems too little and too late—one has to wonder what have she and anyone else actually learned from this experience, since it has been confirmed that no one will lose their job, as a result of this fiasco.

As a writer and as someone who lives within literal walking distance of the University of Virginia, I hope that Rolling Stone and any other media outlet that claim to be committed to journalism will understand the importance of following basic journalism practices.

I also hope that when someone is presented with a story that seems too good to be true, they will keep in mind that perhaps some or all of it may not actually be true, no matter how much they wish it to be.

This story has done more than left  the folks at Rolling Stone with egg on their faces.

It has damaged the reputation of UVA, made it more challenging for rape victims their and elsewhere to have their claims taken seriously, and it has done serious damage to the reputation of journalism everywhere.

While I believe Thomas Jefferson’s university will survive and I am optimistic that the efforts of anti-rape advocates will continue to make positive efforts, although this is only wishful thinking.

Ultimately, all the apologies and promises that this will never happen again, will only have meaning if indeed they do prevent something like this from happening again.

While journalists are only human and mistakes will be made, it’s up to each of us who work in the field of journalism to make sure that preventable mistakes like these do not happen again.

Date Rape, Rape, Sexual Assault is all too common. Resources: how to stay Safe.