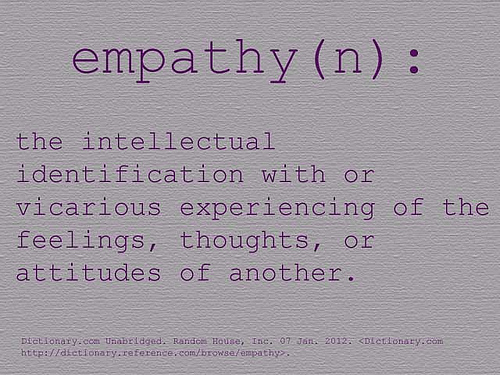 A few weeks ago I wrote an article called A Narcissist and an Empath Walk into a Bar about my marriage to an abusive man.

For me, it was an important step forward in understanding how I let the cycle of abuse evolve and remain in place for so long.

I already knew that my ex was a narcissist who had sociopathic tendencies, but it was seeing myself as an empath for the first time that allowed me to begin to answer some troubling questions.

Of course, any time we think we’ve answered one question, 10 more pop up. In my article, I was using the word empath to describe myself as highly sensitive and responsive to other people’s emotional states. I later discovered, however, that being a true empath means quite a bit more than that.

To be empathetic is to have the ability to imagine other people’s feelings. To be an empath means you actually feel them as if they are your own.

The theory goes that everything is made of energy, including emotions. Empaths energetically internalize the feelings of others and often have trouble distinguishing whether they are experiencing their own, or someone else’s emotions.

If that is true (and it is a hotly debated topic, to be sure) then the question becomes, how do we know if we are simply empathetic (otherwise known as a “highly sensitive person” or H.S.P.) or a capital E empath? And perhaps more importantly, why does it matter?

Initially, I thought the difference between being empathetic and being an empath was simply a matter of degree. In other words, I believed an empath was just a really empathetic person. That is not true. A real empath feels things differently than someone who is just empathetic. Their nervous systems are designed to co-opt the emotional—and sometimes physical—energy of those around them. They don’t just understand what other people feel, they experience it themselves.

I found several questionnaires intended to help clarify the issue. Here is the best one (in my opinion) adapted from The Happy Sensitive.

Signs (not proof!) of being an empath:

12 out of 15 of these statements strongly applied to me. So am I some kind of clairvoyant? Or am I just someone who feels a deep connection to others all the time?

After several days of chewing on this I am no closer to an answer, but one very interesting shift has taken place—I see that I need to make my own feelings much more of a priority.

The problem with being extremely empathetic or empathic is that other people’s emotions carry a lot more weight than our own. If someone around me, either friend, family member, co-worker, student or even a pet, is in distress, I become overwhelmed with their energy. I feel nauseous and panicked and will do anything I can to help alleviate their discomfort so that I can feel better as well.

Is this selfish? Of course it is. But by the same token, over time I have learned—not just the relief I feel in helping others—but the joy I experience when they are no longer in pain. So, not only have I been highly motivated by my personal discomfort to table my own emotions in order to help others, I’ve gotten a lot of positive reinforcement for doing so.

The problem is, during this process, my own needs and feelings become sublimated. If I’m always trying to determine and provide what everyone else needs/wants, how can I ever be in touch with what I need/want?

At 44 years old, I’m ready to change. This is the crossroads that most empathetic or empathic people must come to sooner or later. If we spend out entire lives stuffing down our own energy to transform the energy of others, we become depleted, depressed, resentful and in the end, a mere shadow of the vibrant soul we once were.

The only way to change this behavior is to be able to maintain what I’ll call a “compassionate distance.” This is a state of mind in which we (lovingly) acknowledge the feelings of others and the affect it has on us, while trying to maintain the distinction between those feelings and our own. We must become much more observers and much less reactors, at least at the beginning.

I am only just starting to work this out for myself. It will be a long time before I can tolerate the discomfort of the people around me without the overwhelming need to rush in and “fix it.” But with enough practice, I believe it is possible.

The principles of yoga and mindfulness are the key. I must cultivate the ability to watch my emotions come and go without judgement. Sitting in daily meditation, trying to feel and release the physical sensations of anxiety: the clenched stomach, the sleeplessness, the clamped jaw, the racing heart etc., and remembering that I can’t truly heal anyone until I learn how to honor myself will all help.

Being an HSP, an Empath or simply a deeply empathetic person is a complicated gift. If we learn to navigate it wisely, there is no limit to what we can offer ourselves and the world.

Bonus: The Introvert-Extrovert Myth, & How to Deal with being an Empath.