I Never Wanted to Be a Mom. 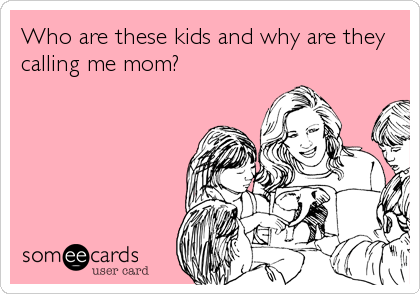 I wasn’t the kind of kid who liked to play with dolls. It never even occurred to me to fantasize about being a mother.

I preferred to run around in the woods, write poems and stories with feathers I found and dipped in ink, collect fossils, and hide in secret places to read—under the piano, in the greenhouse draped with fat purple grapes, among the juniper bushes that circled our home.

Perhaps because I was the youngest of three and had never been around babies or littler children, the idea of taking care of something smaller and weaker than me (except maybe an injured chick or a toad stranded in the middle of the street) just wasn’t in my wheelhouse.

I had no time for “babyish” things. I wanted to be grown, independent, free of the crushing demands and needs of teachers, my parents and anyone else who told me what I should be doing rather than simply allowing me the freedom to do it.

I was heartless and selfish, in the way perhaps only children can be; unapologetic and unaware of my egocentricity until well into my twenties.

Which is why, perhaps, my parents, friends and anyone who had ever known me thought it odd when, at 29, I took up with a divorced father of five who had full custody of his children.

I thought it was odd, too.

Talk about going from zero to a hundred in seven seconds.

I was suddenly plunged into a world filled with swim meets, soccer games and birthday parties, where other moms always seemed to know exactly what to do; what snacks to pack, which camps to sign up for and how to dress their kids for “spirit day” at school.

Back then, if I could have articulated my philosophy on parenting, it wouldn’t have been anything more profound than “fake it till you make it.” I was so overwhelmed that I often crept downstairs to the laundry room after everyone else was asleep, climbed into the XXL dog crate that housed my Great Dane, and wept inconsolably into his spotted fur.

Things grew easier with time—kind of.

The longer I stayed, the less I was just trying to get by and the more I was doing things because I really loved these kids. The stakes became much higher.

When I was forced to send them to their rooms for misbehaving, it hurt my heart as well. When they were injured or upset, their pain felt unbearable to me. I had never before been in the position of impacting other people’s lives so completely, or having their lives impact mine.

It felt good to be needed, but at the same time, overwhelming, claustrophobic.

Then, after my husband and I carefully decided we had enough on our plate and it wouldn’t make sense for us to have another child, I promptly got pregnant.

Oh, I was one miserable pregnant lady. The best illustration of my pregnant misery was my wish to “paint the nursery black,” which, looking back now, I am obviously appalled I ever thought, much less said—repeatedly.

When my son was born, everything seemed to snap into focus. I finally understood the gravity of this thing I had been doing—mothering—down to the root of me. The connection between me and all the kids no longer seemed in any way arbitrary, but essential.

I was, at long last, an adult.

I settled in with my little peanut and continued to try and juggle the emotional and practical needs of eight people—I’m including my husband and myself in the tally.

Despite the crazy-making lack of sleep, the complex reactions of the five older kids to their new little brother and the continuing feeling that I was quite possibly living someone else’s life by mistake, things were good.

But just when I thought I was getting a handle on this mothering thing, everything went off the rails. In December of 2004, my 16-year-old step son took his life. My younger son was not yet one.

Suddenly, I wasn’t just a regular parent or stepparent anymore, I was a parent to four grieving children whose lives had been ripped apart, as well as one needy infant, and I had to do this exponentially harder kind of parenting while deeply grieving myself.

I was so numb that all I can remember is going through the motions with what felt like an enormous steel toed boot squishing my chest.

It took many years and an army of therapists before we became somewhat sane again. In the interim, I added many things besides “mother” to my resume; among them, yoga instructor, reiki healer and published author. I also decided to get my master’s in counseling so that I may try to help others as they helped me.

As I pursued my “real” work, I realized I never truly understood how important the job I’d been doing really was. That being a mom is the most bad ass, heart breaking, heart opening, fly-by-the-seat-of-your-pants-in-totally-uncharted-territory-with-scary-monsters-all-around-you thing any woman can ever do.

Indiana Jones has nothing on moms. Moms are heroes. I am a mom.

This accidental life of mothering has tempered me and forged me, extracting from a lump of formless iron a ring of polished, albeit weathered, gold.

I never wanted to be a mom, but I don’t think my true self could have been realized any other way.

My children taught me how to be a woman, a warrior, a soft dove sitting on her nest and a roaring tigress. When I look at them I see the hands that helped to mold me, and the faces that will accompany me into old age.

Mothering is about a lot of things, but done well, it is primarily a process of mutual self discovery.

“We’re all just walking each other home.”

I will always be grateful that I get to share my walk with my own mother, and with the six dynamic hearts whose paths just happened to run parallel to mine.

Sometimes, I Hate Being a Mom.