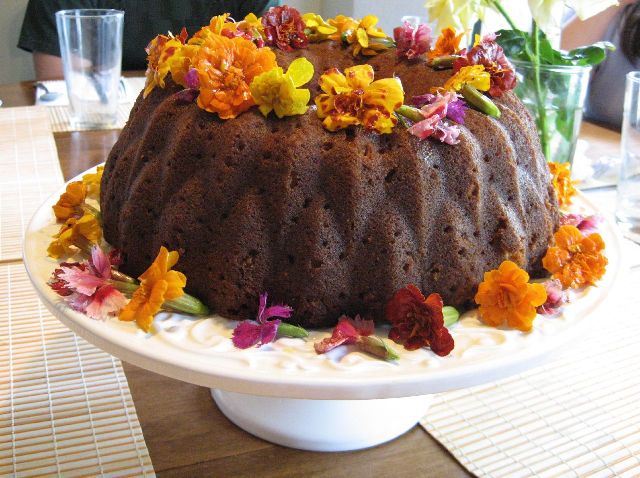 With spring upon us, fresh foods from the garden gradually become available to add variety and nutrition to our plates.

Though most vegetables and fruits are still in scarce supply, flowers explode onto the scene, taking over gardens, fields and mountain sides as if they were here for a reason, perhaps screaming, “Eat me!,” or at least, “Look at me!”

Eating flowers is not a new concept by any means. Ancient mosaics of Pompeii display the gods dining on flower blossoms, and the common folks ate flowers regularly as well. In ancient Greece, France, and Rome, flowers were used to enhance the flavors of food, and even for medicinal purposes. (1)

In the States, an edible flower may show up as a garnish in a fine restaurant, but they don’t appear on menus as an entree as they did for centuries in Europe. Dandelions boiled with honey or batter-fried black elder flowers graced many plates as much more than just a garnish in Central Europe. (2)

Flowers Are Full Of Nutrients

Flowers are loaded with nutrients, and when blooming, offer some significant seasonal and health benefits. One of the most notable constituents in flowers which give them their color are the carotenoids, which act as the precursors for the body’s intake of vitamin A. Flowers contain a very rare form of the carotenoid, lutein, that is not found in many other food sources. This form of lutein is a powerful antioxidant and is well known for supporting eye health as well as a host of other health issues. (1,2)

In addition to their notable antioxidant levels, edible flowers also contain trace amounts of protein, as well as trace amounts of phosphorus, potassium, calcium, magnesium, sodium, iron, manganese, copper, zinc and molybdenum. Roses, violets and nasturtiums, for example, will dress up any meal but they are also loaded with vitamin A, C, riboflavins, niacin and minerals such as calcium, phosphorous, iron and potassium. (7)

It’s no wonder flowers were considered foods in Europe for centuries!

New and very exciting research suggests further health benefits, showing that the flower pollen extracts of rye pollen (Secale cereale), corn pollen (Zea mays) and timothy pollen (Phleum pratense) support the health and function of the urinary tract system, bladder and the prostate in men’s studies. The extract is available around the world under other brand names such as Cernitin, and in capsule and tablet forms as Cernilton. (8)

Interestingly, there is also a wealth of clinical evidence that edible flowers bring more than vitamins, minerals and antioxidants to our plate—they may change, lift and support our emotions. (9-12) Perhaps in the same way the sight of spring flowers brought joy to our ancestors, they can support our emotions in modern times as well.

Flower essences have been used as medicines for the mind and emotions for many years. A flower essence remedy is a solution of water and a preserving substance, with the water containing an extreme dilution of the flower, thus the term “flower essence.”

While many studies have been performed on flower essence remedies for mood-related conditions, most show that they did not out-perform the placebo effect. For example, in one study, all 61 participants who ingested the flower remedy saw significant improvements in mood, but the placebo group saw the same results. As a result, many scientists dismiss the benefits of flower remedies as nothing more than placebo. However, placebos can be powerful medicines. In many studies, placebos out-performed many of the new pharmaceutical drugs for mood control, and yet the drugs were still released. This is because the placebo effect is so high. It generally ranges up to 82 percent for effectiveness. (10-12)

Unfortunately, there has been little research on edible flowers and the safe limit of daily consumption for edible flowers is not yet known—so before you make flowers your next meal, start with small amounts, such as sprinkling some on your salad, adding them as a colorful garnish to your favorite dish or dessert, or tossing a few petals into your smoothie. (7)

Eat flowers only if you are certain they are edible.

On that note, do not eat flowers from florists, nurseries, garden centers or flowers found on the side of the road. Consume only flowers that you or someone else has grown specifically for that purpose.