The Best Place to Turn When We’re Lost in Fear. 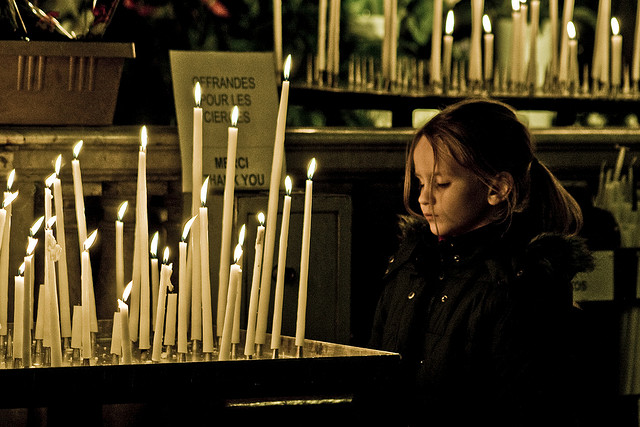 I was with my friend and her husband, Sam, when the surgeon came in to explain what he was going to do during Sam’s brain surgery.

“This is God’s country,” he said, as he drew an imaginary line from the back of Sam’s ear to the base of the skull on Sam’s neck.

“We’ll be going in at least six inches deep. Layer after layer.”

The surgeon had a presence about him. He projected confidence and a “can-do” manner that bordered on bravado. If he were a marine he’d be one of the ones you’d want to send in first, all the men following him with valorous huzzahs as they went running to their deaths.

Running to his death. That’s what I thought Sam was doing.

It’s not the way I would have handled brain surgery. I don’t want anything that is injurious or invasive or insulting to the body—even if it’s medical, even if it’s purported to save my life.

Years before, when my father was having open heart surgery, I went into the intensive care unit after the operation to make contact with him while my brother and sisters were out in the waiting room.

“What’s it like,” my brother said when I came out.

That was when I decided. No torture for me. No matter how clean.

Of course it’s easy for me to have an opinion when I myself am not faced with such a decision. Everything is easy when it’s not happening to you. Opinions are the easiest thing in the world. The cheapest, as well. But the decision Sam and his wife made to have the God’s country of Sam’s brain explored by a surgeon came at a very high price.

To me, that price was fear.

“I’ll pay the price if you’ll take away my fear, no matter what it costs.”

Several years prior to this, I was in the midst of a personal crisis that upended me. Filled with fear and anxiety, I had no perspective and was seemingly out of options. Instead of merely going out in the mornings for my daily walk, I would go out for my daily walk with fear.

One of those mornings, I noticed a small, wild rabbit hopping along beside me. Hop. Hop. It actually seemed as if he was keeping pace with me. He’d stop, then hop a bit further and then stop.

Was he waiting for me?

My head was churning, my thinking a twisting tornado. In almost ridiculous desperation, I reached out to the rabbit.

“What should I do, little rabbit?” I said silently. “I need help.”

Then an incredible thing happened. The little rabbit stopped and turned around. He looked at me for a second—and answered me.

“Seek inner peace,” the rabbit said. “Everything else will take care of itself.”

Somehow that little rabbit/consciousness/angel/Grace of God could see inside my head. He could see that there was definitely nothing peaceful going on in there. In fact, what was going on was a cacophony. He could see how afraid I was and his simple words washed over me with clarity.

He had given me a plan. Not a plan that addressed my problem directly…but a plan.

And with it I knew where to go and what to do. I didn’t have to respond to the so-called “crisis” I was facing at all. It would take care of itself. All I had to do was seek quietude— seek what would give me inner peace.

Everything else would take care of itself.

All those years later, I noticed as I sat in the surgery waiting room with my friend from 11:00 that morning until 9:00 that night that I was able to be there with her in peace. I was able to sit with her and let the events wash over me, including her fear and anxiety, her despair and her grief. I felt like I was a support to my friend and confident that I would not be swept away by all that was going on. I felt big on the inside and when the surgeon came out and walked over to report on the surgery to my friend I stood behind her, a wall that would assure that she wouldn’t be ambushed any more than she already had been.

As it turned out, all the 10 hours of surgery that day ended up doing was give my friend a name for Sam’s incurable condition: Lymphoma of the brain.

The pastor from my friend’s church arrived and I stepped away and watched as he, my friend, and the surgeon spoke and huddled together, their backs against the awful reality the surgeon was explaining.

Sam was in a coma. He wasn’t expected to survive.

The pastor put a supportive hand on my friend’s elbow. She waivered, her knees almost buckling.

I watched them, the pastor and my friend, as they walked away to the chapel. In my mind’s eye, I saw a little rabbit hopping along behind them.

“Give her peace,” I said to the little rabbit. “Give her peace and make her feel big on the inside—big enough to contain what’s happening to her.”

Everything else will take care of itself.