Unrolling my Mat, Pitching my Tent: The Middle Path between Yoga & Religion. 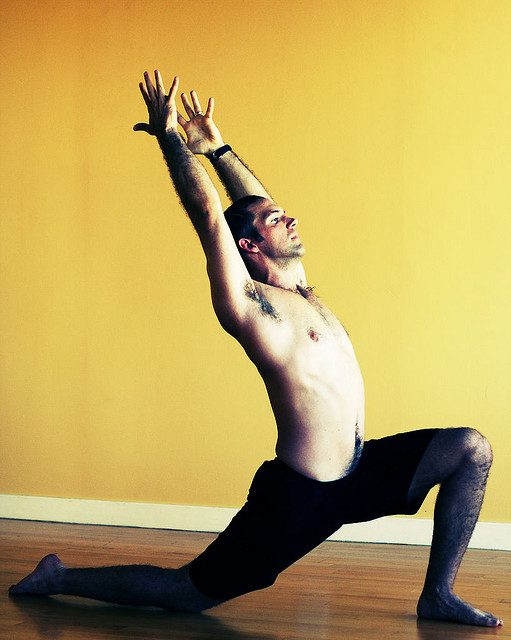 My imagination is a wild, galloping horse.

It loves to leap the fence, dashing for the border between fantasy and fabrication. Terrified, exhilarated, I lean forward, pressing my heart to its mane. When I’ve gone far enough, when I worry I’ll lose sight of home, I whisper, “Whoa. Whoa.  Slow down.”

Imagination slows to a trot and turns on home.

For a decade, however, between the ages of 25 and 35, I didn’t want to go home. I didn’t want to face the music, to acknowledge the string of mistakes I’d made out of fear and ignorance and early 20-something stupidity. I gave my imagination free reign to roam. “Go boy,” I barked to my wild horse. “Find us a new home.” Eager to outpace shame and regret, we galloped for the hills.

Imagination carried me, a once secular Jew raised in an assimilated home, to the land of traditional Judaism. I saw thrilling new sights, like the cave in Tzfat where, together with pale, bearded brethren, I floated in a womb of frigid water and emerged reborn. I learned bizarre new beliefs, like the Talmudic teaching that a woman’s monetary value depends on the status of her hymen. I fabricated a new life, a life dictated by law and sweetened by lore, filled with the purpose and passion I lacked just a few years before.

Imagination convinced me that I belonged in this new land, but my heart objected. My body fought back.

During my first year of rabbinical school, I began to collapse at random intervals, plagued by panic attacks. I hungered to make traditional Judaism a home, to one day raise children amidst these fervent and faithful, but my nervous system said no.

It kept bringing me down to earth. Literally.

Every panic attack forced me down on the ground, staring up at the sky until my heart rate slowed. In the absence of a sane voice whispering “Whoa. Whoa. Slow down,” my body stepped up, lassoed my mind and stopped me cold.

Retracing my steps and returning to a life untouched by tradition might have quelled the panic, but the notion of heading home, hat in hand, seemed far too shameful. So I reached for the bottle. 150mg a day of Effexor quashed the revolution.  No more panic attacks. No more inconvenient episodes staring up at the sky. Drugs enabled me to live a life of Jewish observance, to complete rabbinical school, to settle with wife and kids and to serve my congregation. The pills never whispered, “Whoa. Whoa. Slow down.” They enabled me to grow confident far from home, to supplant the call of the heart with the dictates of dogma.

During my first years as a rabbi, my heart stayed confined, my body subdued. Then, one winter, after a 10-year yoga hiatus, I unceremoniously stepped back on the mat. I didn’t return to yoga expecting salvation. I just wanted a stretch.  Some exercise. A little space from the synagogue, the email, the kids.

For the next two years, I continued to practice.

I lost 40 pounds. I stopped smoking. I yelled less at my kids and listened more to my wife. Most miraculous of all, by bending and twisting my spine, by invigorating my nerves in Camel and massaging my kishkes in Cobra, I reacquainted myself with life below the neck.

I heard the beating of my heart. I sensed the earth beneath my feet.

Yoga brought me back to the perfectly imperfect self I’d worked so hard to leave behind. After every session on the mat, I blinked my eyes, looked around at the reality I’d constructed and said some version of “We’re not in Kansas anymore.”

The black and white world of Jewish law felt foreign. Yet, as the rabbi of a traditionally-minded congregation, I not only had to obey the law, I had to preach it, too.

So I quit. With the blessing of my equally disenchanted wife, I turned down a contract renewal and headed for home. As I packed my bags, I assumed I’d chosen the mat over the sanctuary for good. I imagined myself a recovering rabbi turned yogi, a man who’d bet it all, lost big and then rebuilt himself once more, vertebrae by vertebrae, posture by posture.

But that’s not what happened. For, in every synagogue there are at least a handful of brothers and sisters who feel far, far from home. Little did I know that, after our move to D.C., I would find work as a freelance rabbi, traveling from synagogue to synagogue, teaching my tribe how to listen to their own bodies on the mat. Little did I know that I would be called “Rabbi” and, for the first time in a good long while, not cringe.

Imagination led me to a foreign land. Yoga turned me around.

Rather than return home, however, I stopped somewhere in the middle, at a point in the wilderness, a place between all or nothing, between observance and disregard, a beautiful, lonely, enchanting little piece of land on which to pitch my tent. How long we’ll be here, one never knows.

For now, though, it’s a great spot to unroll some mats, call to my tribe and, stretching together, reach for that boundless sky.

The Rabbi Called. He’s Been Watching Me. 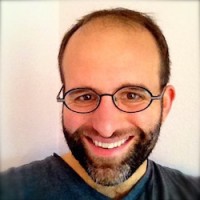