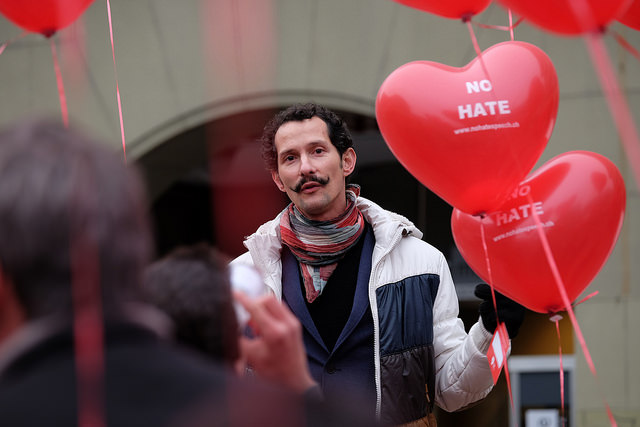 Huffman, who co-founded Reddit in 2005 returned after six years away in an effort to win back the confidence of its users, starting with a turnaround on its content policy. NY Times said the new policy “would effectively ban spam, illegal activity and harassment, as well as the posting of “private or confidential information” and sexual content involving minors. It would also give a separate label to content that “violates a common sense of decency,” though the company has not yet specifically defined what this entails:”

“This is what we will try, and if the hateful users continue to spill out into mainstream reddit, we will try more aggressive approaches. Freedom of expression is important to us, but it’s more important to us that we at reddit be true to our mission.”

The proposals are not set in stone, and Reddit will take suggestions on changes from its community of users, who are known as Redditors.

Lately my Facebook feed has been flooded with rainbows and declarations of “Love Wins.”

Obama’s Charleston speech has gone viral—bringing people online together to mourn and reclaim hope after the tragedy.

But that’s not the whole picture. And love isn’t always winning, especially when it come to the internet.

As always with the internet and social media, there is an underbelly. There are the trolls and the haters and they never rest. And now threads of extreme racist abuse on Reddit have once again prompted the question of who is responsible for moderating this kind of activity online.

Earlier this month Reddit banned five subreddits, including racist and anti-gay threads and a mocking forum called “Fat People Hate.” In a statement, the company said:

“Today we are announcing a change in community management on reddit. Our goal is to enable as many people as possible to have authentic conversations and share ideas and content on an open platform. We want as little involvement as possible in managing these interactions but will be involved when needed to protect privacy and free expression, and to prevent harassment.

It is not easy to balance these values, especially as the Internet evolves. We are learning and hopefully improving as we move forward. We want to be open about our involvement: We will ban subreddits that allow their communities to use the subreddit as a platform to harass individuals when moderators don’t take action. We’re banning behavior, not ideas.

Today we are removing five subreddits that break our reddit rules based on their harassment of individuals.

We are continuing to add to our team to manage community issues, and we are making incremental changes over time. We want to make sure that the changes are working as intended and that we are incorporating your feedback when possible. Ultimately, we hope to have less involvement, but right now, we know we need to do better and to do more.

While we do not always agree with the content and views expressed on the site, we do protect the right of people to express their views and encourage actual conversations according to the rules of reddit.“

And yet, reddit is quickly establishing itself as an island for unregulated hate-speech online. Racist subreddits are among its most popular. One such thread, entitled “CoonTown” has been ranked in the top 2% of subreddits, as despite—or more disturbingly, because of—violently racist material.

The Reddiquette section’s first rule is “Remember the human.”

“When you communicate online, all you see is a computer screen,” it says. “When talking to someone you might want to ask yourself ‘Would I say it to the person’s face?’ or ‘Would I get jumped if I said this to a buddy?'”

But this exactly what internet abusers are not doing. The human is entirely forgotten.

And it’s easy to put this behaviour in a box and say, “Those people are awful. Someone needs to stop them.”

But the people who are posting this kind of thing are often not easily identifiable to us in person, because they don’t carry around a Confederate flag or wear a swastika armband or preach their hatred to our faces. They are just like you and I, in some ways.

I come from a country steeped in a history of racism and hatred. Today, in many ways love has won and in many small and personal ways it won throughout that history, until the small acts of love became bigger acts of activism, became a resistance movement, became social change.

However, even now I know fellow South Africans, sometimes as close as extended family and “friends” who throw around racist slurs without a second thought under the guise of jest or cameraderie, or share right wing content online before stopping to think. And yet they work with and live next door to and sometimes even in other circumstances socialise with black people, gay people, all sorts of people who they would never say these things to in person.

We would all do well to “Remember the human.” There is a song that goes:

And ultimately that’s who is responsible: it’s us—you and me. We cannot tolerate hate speech anywhere, online or otherwise. We should be the ones to rally against it where we find it. We cannot let the darkness win.

Racism, misogyny and homophobia is still rife, especially on the internet where people are hidden away behind a screen and a keyboard.

But where we find it we should speak it out loud, and by speaking it out loud, we shine a light on it and if even some light is shining, that hate has less power.

Watch this video from the Lithuanian Centre for Human Rights of a social experiment that they conducted to highlight issues of hate speech online and next time you hear or see hate speech, report it.

Speak about it with your family, your colleagues, your friends, your students, your teachers. Call people out who share racist or any-ist content on Facebook, unfriend them if you must. Let’s hold each other accountable and drag hate out of the shadows and into the light.

Reddit turned down requests by the BBC for an interview about this story, but in a statement told BBC Trending that it continues to be “committed to promoting free expression.”

A few things other things we can do:

Email Reddit to report a subreddit or send a modmail.

Join the No Hate Speech Movement

When Our Words Become Weapons.