Do we Blindly Believe Everything we Read? 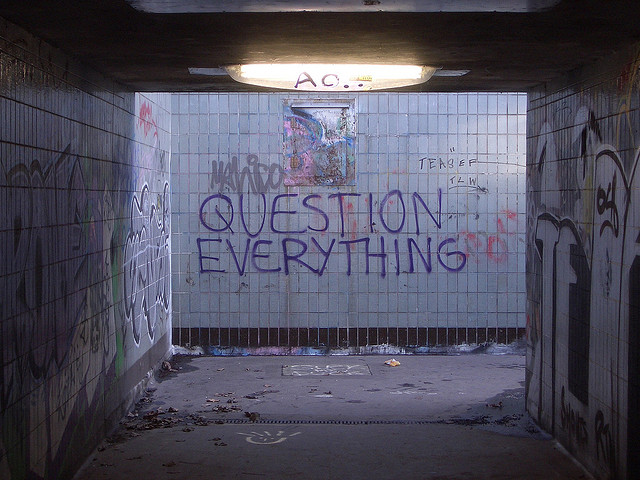 Despite how it’s printed, news isn’t always black and white.

The truth isn’t always delivered shining on a silver platter—we may have to dig for it, looking beyond the initial, glossy presentation.

News is not like a work of fiction with an evident protagonist and evil villain. There are never just two view points to a single story—they’re countless. Yet every story we read tends to present just one view—one.

One blade of grass, from a flowing green field…

Years ago, scrawny teenage me was sitting at her overly large desk, awaiting the start of AP History. The class was chaotic—chatty students sharing the highlights of the short, but sweet, summer. Our professor sat at his desk, engaged in conversation with a student, blending into the mass jargon that filled the room.

Suddenly papers went flying, and the professor’s thundering voice filled the room. The student he’d been talking to hastily bolted, and the echoing boom of silence filled the classroom as we all stared in shock. My pensive teenage mind poetically thought, “Great, my history teacher’s a dick.”

Our teacher was flustered. He was sweaty. He started mumbling.

He encouraged us all to our desks and said, “Um, we’ll have to report this to the office. Can everyone write down what you saw on a piece of paper? You’re all witnesses.”

Apprehensively and anonymously, we all quietly began to write. Each one of us walking slowing to his desk to drop off our accounts, carefully, so as not to ensue another outburst.

Once they all were gathered, our teacher walked over to the door and let the student, who had bolted earlier, back into the room.

It had all been staged—a trick!

He began to read each of our anonymous accounts back to us. Each one—every single one—was different. There were people who had seen nothing and some who fabricated our teachers rage.

Similarly, history is one perspective. The stories that we read are typically written from just one person’s perspective. We must always remember that what we read is not necessarily the full truth.

As we comb through stories—or bits of information that fly at us throughout the day—we tend to hold onto those certain aspects that pertain to our truth.

For instance, why are Republicans more attracted to Fox News? We like to read what appeals to us. We like to read things that we generally agree with. I could assume that a devoted reader of this website is likely to be someone liberal, free and open in their thinking.

That’s why events like the Watergate Scandal or the Snowden Wiki-leaks shock and startle the masses. We’re passive in our learning. We often believe, without question, whatever we read in the newspaper, on the internet or see on television.

When you read a news story, do you notice what kind of source they chose to interview?

Who the source is could explain a lot about the “angle” of the story. If someone writes an article about the “negative effects” of the Supreme Court legalizing gay marriage, but the sources are all straight, Westboro Baptist Church attendees, then it’s likely to be a biased story, isn’t it?

Recently, the best-selling, expensive headphones, “Beats by Dre,” are having their “truth” questioned.

This product was deemed a prestigious, well-crafted creation. However, once broken apart and dissected by a young man at Bolt, it was discovered that the pieces used to assemble the headphones are cheap and glued with added metal plates for weight (to feel heavier and more professional). In total, the price of the equipment and assembly is around 17 dollars. Gasp! We are surprised, yet we all believed and perpetuated one story of what these headphones entailed.

It’s like putting together a puzzle without having the picture on the box to guide us. We have all these pieces, and as we start to put them together, we might be so certain that the puzzle is going to be a picture of a whale. That might be the truth—in that moment—but in the end it turns out to be a picture of lake, under the mountains.

Was this “truth” ever a “lie?” Or was it simply the only “truth” we knew at the time?

Sometimes the truth is buried, but it can be uncovered. Sometimes the full truth may never be seen. This doesn’t mean we should scrutinize everything with a negative eye or become overly critical about the news.

It  just means we should recognize all accounts as the mere tip of the iceberg.