Tears on the Smiling Coast: How my Time in Africa Changed Me.

In the May of 2012, my mind was blown, my heart was scarred, and my soul was ignited.

It’s been just over two years since I took those death pills (Malaria-prevention medicine that, when taken, literally make you feel like you’re dying of malaria) and boarded my first international flight.

It certainly doesn’t feel like it’s been that long.

I still remember hugging my friends goodbye when they dropped me off at the airport. I remember calling my mom and my grandma before getting on the plane. I remember holding my classmate’s hand as I tried to be brave as the plane flew up into the clouds and steered us into the unknown.

It was my first big adventure.

We spent a day in Casablanca, where security stopped traffic so we could cross the street to visit their beautiful mosques, and then were were off to the Gambia.

The Gambia is on what is known as The Smiling Coast. The sun shines most of the year, except when the scorpions come out (rain calls to them like the smell of funnel cake calls to Americans at a baseball game!).

I filled three journals on my trip to Africa.

I interviewed people and documented our travels. I approached most of what I witnessed as a researcher. I wanted to understand. I wanted to see the world from another person’s eyes. There was no judgement. There was only note-taking and observation.

Then, every night, I would lay in bed and reflect on everything I’d seen, writing about it from my own perspective.

And every night I would cry.

Some tears I shed were out of rage and pain. I was hurt by things I read in the paper. I was angry by things people would tell me.

I was scared because I was so helpless to help.

I don’t feel like I need to go into the details of all the bad things happening in Africa. Those things are generally the only things newspapers report on.

Instead, I’ll tell you about how some of my tears were from relief and joy.

I met some of the happiest, most wonderful people on that trip, many of whom I am still in touch with today. They thoroughly changed my life. They not only put up with my endless questions and note-taking, but they encouraged it. They loved to call me “Stacy, the reporter” and tell me stories of their lives and the history of their country.

I would sit for hours and listen to them. We would have Attaya tea (which is a cultural pass-time that literally can last for hours) and just exchange stories.

The trip was a college class. We had spent a semester prepping for the trip, watching documentaries, hearing first-hand accounts from professors and other students who had made the trip in the past, and read countless texts to prepare ourselves for the cultural and political differences between the states and the Gambia.

We quickly learned that, it wouldn’t have mattered if we had studied for a year. Or two. Or three. Nothing could have prepared us for that trip.

When I got off the plane, I half expected to see the opening scene of The Lion King. I thought there would be sand and sunshine, rain forests and amazing wildlife. I thought people would be living simply, responsibly, and cleanly, not wasting anything.

Although I did see a crocodile in water, monkeys in trees, and a pack of hyenas at their feeding time, they all lived in a nature reserve.

The fences were up to protect the trees as much as the animals. Deforestation is a major problem in that part of the world because of their unreliable electricity supplies. However solar energy is on the rise, with the help of organizations like Power Up Gambia.

Most, if not all people in the Gambia speak English, at least enough to sell us something or ask us for something. We didn’t go anywhere without someone asking for our shoes. They are a haggling-crazy people, which made shopping for groceries a day-long event.

I spent many nights on this trip wondering what I could do for these people, this country, and the world in general. My professor hosted a political discussion in the town. The subject was Does Foreign Aid Help or Hurt Africa?

I’m pretty sure I left with more questions than I had when I arrived at the lecture.

My heart broke when I saw the hunger.

My soul ached when I saw the hate.

I wept when I had to leave. I held onto the friends I had made there, never wanting to let go.

I never want to lose what I found there: so much love and compassion, a beautiful community and sense of responsibility when it comes to caring for that community.

I think most Americans, or Westerners in general, go to Africa wanting to save it.

We want to turn Africa into another America or another England or another…whatever. We want everything to fit into one standard mold. We want everyone to look alike, talk alike, dress alike, and have wi-fi (which they did have in most restaurants).

Westerners think that because Africans aren’t doing business like us or living like us, that they must be miserable.

When you look for the bad, you’ll be lost in the darkness. But, when you open yourself up to the good, you’ll be consumed by sunshine.

I still have the drum I bought in the Gambia. It sits in my living room.

Sometimes I play it outside, under the dark sky by a lively fire. Other times, I play it inside and sing the song that every Gambian knew by heart: Waka Waka by Shakira, which was the official 2010 FIFA World Cup song.

That drum helped me bring a part of Africa home with me, so that I would be reminded of everything I saw every time that I see or play it.

In the May of 2012, my mind was blown, my heart was scarred, and my soul was ignited.

That trip changed my life.

Africa changed how I look at the world.

More importantly, we’re all the same. 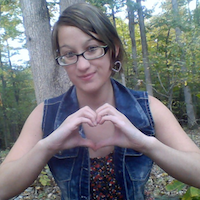 Stacy Porter is a yoga instructor, writer, and dirt worshiper. She loves her garden, having tea parties with the fairies, and howling at the moon with her Jack Russell Terrier… Read full bio