For Aspiring Writers: What Matters Even More than Grammatical Correctness. 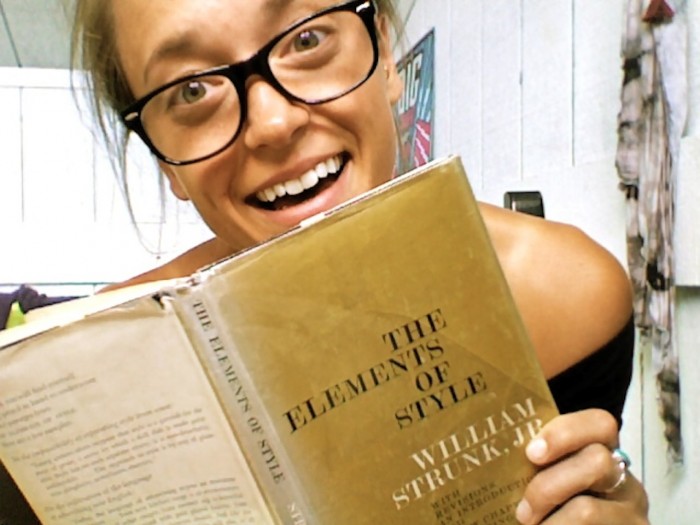 “Are you going to finish your coffee?”

I had known this man for less than an hour, yet he had no fear in finishing the rest of my cool, cinnamon-doused coffee. Amidst a crowded cafe, the question was posed from a tall, freckly red-head sporting a cowboy-hat and short (I mean, short) green shorts and a personality even larger than his fashion. My new mentor for the summer, Waylon Lewis, was surrounded by his equally open, confident and kind crew of editors.

When you first meet a group of people, you possess little knowledge of the impact they are about to have on your life.

I had no clue they would help me shed vulnerability and fear as confidently as a bleach-blonde Barbie striping to dive in a pristine pool. No clue that this group would push me, uncomfortably, bluntly, to unfurl my voice as a writer—a voice hidden beneath swirls of fancy, poetic words, limited by worries of what other people thought. No clue that I would start to embrace rawness with a craze.

I started the Summer Apprentice Program with what I thought was a well-established self-identity. Oh, I had no idea what was coming.

My ego was stripped, bruised, boasted, blown-up and shattered in a bizarre whirl-wind this summer. I’ve never been so unbelievably angry during a program, and as equally humbled.

My first vivid moment was during a writing exercise where we were critiqued on a paragraph we wrote describing a lesson we learned over the weekend. I had just attended a yoga festival and was oh-so-enlightened. I wrote a plastered answer along the lines of, “I’ve been learning about my energy and how to heal others in the mountains. When we collectively learn to listen, to feel our energy, it can start to fall away. Who brings out your light? Your darkness? Both heal you. We can’t be healed by others. We must heal ourselves.”

I was sure I’d get a standard, “Good work,” reply. Alas, I received some criticism: “So general, I don’t feel a thing.”

Well, I felt something. It was rage. I wanted to chuck my piece-of-sh*t laptop across the f*cking room. It wasn’t bad writing, per say. If I was back in college, that piece would pass a class. The truth hit me harder than the image of my computer smashing against the wall. The problem was it wasn’t real.

I shared my anger, a little aggressively. Waylon’s response?

“Elizabeth, you’re personal in person. Just be you. You can tell me to f*ck off but be personal. General is a waste of the readers’ time.”

Just be me. No one had ever asked that from me.

No one had ever asked that from my work.

Being real is f*cking scary. Right? Duh. We can all agree on that. I was scared of being raw. It was easier to hide behind my little self-blog of five readers than to share my deepest thoughts with thousands, possibly millions, of readers on elephant journal.

I was used to hiding behind well-spoken cliches trying to deliver my point safely. I would scramble my brain to find the perfect words. Elephant journal encouraged me to write simply. Simplicity: a rare beauty. Real is conveyed easily when one writes about a situation as an observer, with no plot in mind. The plot comes. Finding this took work and catapulting off my safety net.

The best responses I’ve received from my writings are the pieces that are simple, composed of genuine words. People respond when I’m real. Monitoring elephant’s social media has taught me that readers can smell groomed bullsh*t from a mile away. Readers, the population, can spot authenticity. They don’t connect to my well-groomed poems, dripping with Thesaurus-altered words.

“No time for poetry but exactly what is. Remove literary, grammatical and syntactical inhibition.” ~ Kerouac

Grammar is not my strong suit. I get caught in my rambles and grammar gets lost along the way. I was told not to worry as much about grammar, that rawness was treasured over all things. A rock can be polished and still be genuine but Fool’s Gold cannot.

Not only does elephant journal desire rawness, mindfulness and authenticity; they practice what they preach.

I attended part of their work retreat in Boulder, Colorado. I was astounded when we did yoga under the sun and meditated before starting a meeting (I know, sign me up full-time). I had just worked a pretty mainstream yoga festival where the work ethic did not coincide with the yogic message they were trying to perpetuate.

Each staff member suggested desired changes for the publication; each one was listened to and open feedback was given. There was an underlying rule in the room: “I’ll accept you as you are if you accept me as I am.” Each employee of this publication is so uniquely themselves: open and accepted. It’s beautiful (really, I’m at a loss for words here).

No bullsh*t. No scripts.

Hiking, farmers markets and the Shambhala Mountain Center were staff retreat activities. They used reusable water-bottles; forget plastic. They biked everywhere. They meditated. They bowed. They ate at organic, local restaurants. They listened to me tell stories about the Chakras without looking at me like I was bat-sh*t crazy. They don’t think you’re weird when you dive in a pool fully clothed because you want to join in on the fun.

If you get the chance to meet, work with or attend anything with the elephant journal staff, take it. Embrace being raw. It’s welcomed.

I’ve learned to give more of myself outside the writing world. I’ve dropped editing my thoughts and started being genuine in communicating my feelings and desires.

I’ve found myself biking to the library to get yellowing books on punctuation, grammar and Hemingway. I carry a mason jar everywhere to minimize my plastic cup use. If I don’t agree with something you’ll hear about it now (sorry, friends, for the Donald Trump rants. Although I do think elephant journal holds plenty of examples of countering politically correctness).

I’ve learned not to let my ego get bruised with criticism but to use it as a vehicle to get better. I shared a blog that I published to a group of fellow elephant apprentices. They commented on a few grammatical errors; the errors were easy and quickly fixed. “Old Elizabeth” would have fallen over in dramatic disgrace by imperfection, letting my mind criticize, “You suck!”. Instead, a simple “sh*t!” was uttered, lesson was learned. We can grow from criticism or torture ourselves.

I’ve become more raw as a writer, less judgmental as a reader and more caring as an editor.

I’ve stopped worrying about what the reader will think and focus instead on telling my story simply, describing little details.

I’m sitting here, sipping my cinnamon-doused coffee, talking to you like you’re sitting across the table from me (secretly thankful you can’t snag a bite of my overly-large chunky carrot cake).

I digress. My point, dear reader, is give more of yourself to the world. Give more. Be you. Be raw.