The Elephant in the Room of Discrimination. 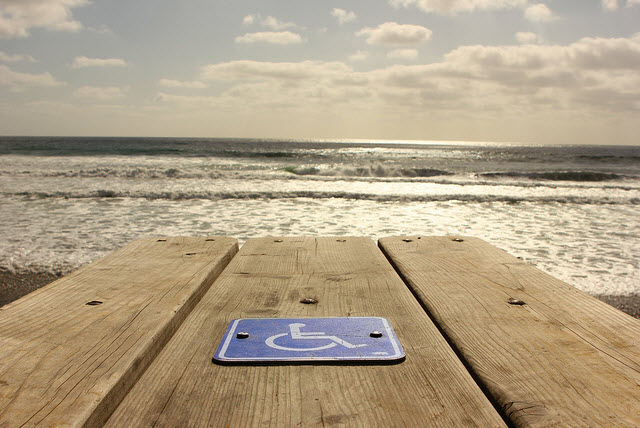 I recently had a discussion with one of my long-time friends about discrimination.

To us, it’s a repulsive reality in our world. Throughout our conversation, we reminisced about our childhood and the many privileges afforded to us like graduating from high school, going to college and working government jobs. But then she said something that stirred my emotions—she declared we were poster children for white privilege.

Because we’ve known each other for decades, we’re comfortable challenging each other’s ideologies, and this is where our opinions diverge.

There was an elephant in the room she overlooked, but I had to acknowledge. It’s glossy black, weighs 300 pounds and rolls around on four airless tires. This proverbial pachyderm is my wheelchair.

While I know I’ve had tremendous opportunities, I feel that true white privilege doesn’t apply to me.

At the moment of my birth, the doctor knew I was different. I didn’t cry out in shock or squirm in discomfort. Instead, I gazed about lying limply in the doctor’s arms.

At three days old, I was diagnosed with a congenital myopathy. The doctors told my parents to take me home and make me comfortable, but to not to get attached. I wouldn’t live past three months of age. However, if by some miracle I did live, I wouldn’t be able to eat, walk or talk. I’d be a vegetable.

My introduction into this world was disheartening.

As if the world wasn’t cold and cruel enough, I was already experiencing blatant discrimination. I was only a week old. My family felt lost.

Through the power of prayer, parents who refused to give up on their daughter and pure tenacity, I persevered year after year. I survived. After multiple muscle biopsies and misdiagnoses, the doctors finally determined I suffered from muscular dystrophy.

This disease caused me to lose muscle tone. Every year, I got weaker. By the age of nine I was permanently confined to my motorized mammoth.

I’ve been privileged to more discrimination than most people.

Have you ever been told you’d amount to nothing because of your genetic abnormality? I have, at birth.

My parents were grief-stricken.

Have you ever been ostracized by being carried up and down stairs at your elementary school because the administration didn’t want to install an elevator? I have, until my parents brought an ADA (Advocates for Disabled Americans) representative into a meeting with said administration and threatened to sue.

Have you ever been humiliated in front of 300 people? I have, when someone yelled to my choking friend, “Don’t sip from the same drink as her. You’ll catch her disease.”

Have you ever been spit on because you’re inferior? I have, while I was waiting for a bus simply because I glanced in the wrong direction.

I was in shock. Never before had I known hate.

Have you ever been followed by two male college students who talked about committing violence? I have, when I was returning to my dorm room. They said it was a good day to inflict injury on a handicapped person.

Have you ever been insulted by your boss because your disability wasn’t good enough? I have, when I was told it was too bad I wasn’t Latina. Then, I’d be two minorities instead of one, and the company would get a bigger tax break.

But it’s just not discrimination I’ve faced on a daily basis.

Have you ever been told which bathroom you’re allowed to use? I have. Every inaccessible toilet forces me to empty my bladder in a specific place.

I feel guilty because of my perceived germs.

Have you ever been told where you’re allowed to sit? I have. Every designated handicapped seating area in a theater dictates where I should park my wheelchair so that I don’t obstruct someone else’s view or aisle where someone else walks.

Have you ever been told which entrance of a building you’re allowed to use? I have. Every building that has stairs at one entrance and a designated ramp at a different entrance makes me look like an indentured servant who’s told where it’s acceptable to be seen.

Have you ever been told where you can sit in a restaurant? I have. Every time I’m escorted to the back of an eatery because the server is worried someone might trip over my wheelchair.

Have you ever been told where you can sit on a bus? I have. Every time the driver lowers the lift and moves the seats.

In 2015, I, along with millions of other disabled people, am segregated. Yet I’m supposed to be grateful. For accommodations. For accessibility. For inclusion. Don’t get me wrong. I appreciate everything my disabled predecessors fought for.

The Americans With Disabilities Act—however flawed—wasn’t signed into law until July 26, 1990. Disabled people were the last minority in this country to get rights. But these rights aren’t enough.

Post-Rosa Parks’ stand against injustice and racism, where my country is no longer marked with white and colored signs, being “over there” is mandatory for me. I continually suffer under socially acceptable Jim Crow laws.

Why am I subjected to this?

Because society has been deluded into believing designated areas for disabled people make us feel comfortable. In all reality, these areas exclude us from participating as equals.

For some, segregation ended more than 60 years ago. For others, it’s an ongoing battle of discrimination that the average person, regardless of creed, gender, color or ethnicity, could never understand.

I’m not the poster child for white privilege.

But my patience grows thin every time someone pats me on the head and declares how much of an inspiration I am to the person standing next to me.