5 Unexpected Benefits of having Less Stuff. 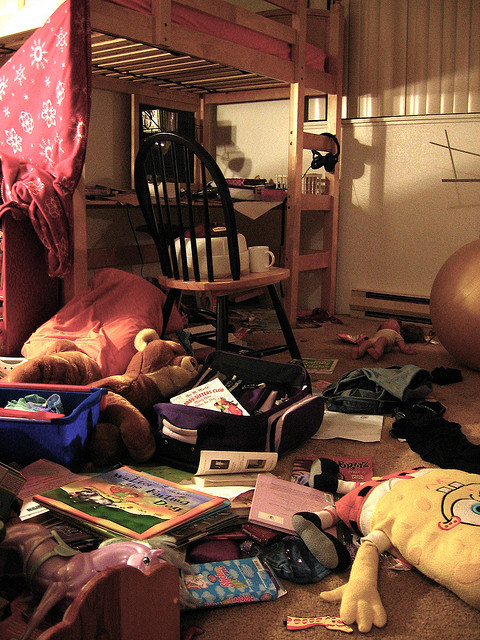 During 2015, I have been on a mission to rid myself of clutter.

I always considered myself a minimalist who had far less stuff than others, but my overflowing bookcases and closets said otherwise.

The truth is, I had a lot of junk. Tons of it, in fact, although I didn’t call it junk.

When it came to my precious books for example, I said they were an investment of sorts. I said that one day, my children were going to read those books and I convinced myself that they gave my home a certain amount of class and character. The reality was, though, that all they were doing was taking up valuable space. The vast majority of the ones I parted with were ones I had for years that I had never even attempted to read and probably never would.

As I shared in a previous post, my life was changed forever by the Marie Kondo’s book The Life Changing Magic Art of Tidying Up: The Japanese Art of Decluttering and Organizing. Unlike previous books I’ve read, that mostly dealt with creative ways of storing clutter, Kondo’s book dealt with getting rid of it of it and keeping it out for good. Given that the book is an international best-seller, it seems she struck a chord with many.

While getting rid of my excess stuff has been life-changing. Some of the rewards have been ones I was expecting, such as more space for the things that matter most to me.

Here are five unexpected ways that getting rid of clutter has benefited me.

1. I actually use the stuff I have now.

It’s a funny paradox, but when I had more stuff, I actually felt I had less choices. As I result, I tended to use the same things over and over again. (This is especially true when it came to clothing.) However, once I pared down, I saw I had some really great things I had hardly ever used and began to use them.

There really is no point in keeping things unless we are going to use them. Any object, no matter how beautiful, nice and valuable isn’t going to do much by being locked away. If we are keeping a certain item away because it is valuable, then that may be a sign to sell it. Take the money and either save it or put it towards something we want or need or can use now.

2. It takes less time to clean.

While my home is pretty small by American standards, it used to take a lot of time to clean it. The main reason was because I had to move a lot of things in order to clean—especially when it came to cleaning the rugs or floor. Plus, all those books and knickknacks gathered dust. Now, I no longer have that problem. It takes less an hour to clean my entire home, including the bathrooms, and it can go longer in between cleanings too.

3. I think twice or even thrice before making a purchase.

Costco recently opened in my town and while I have a membership, so far the only thing I have bought is gasoline and a dust buster. The American way assumes that more is always better, I don’t agree. When I recently spied a so-called great deal on some supplements I use, I asked myself what the likelihood was that I would actually use them by the expiration date. I realized that I wouldn’t even use half of them by then, so I put them back on the shelf. Even if I had been able to use all them in time, there still is the fact that they would have taken up considerable space in my kitchen cupboard. Space is valuable.

4. I can focus on the present more clearly.

Much of my clutter was linked to my past or the future.

“I can’t get rid of this dress because I bought it the first week I moved to London!” or “I will use this material one day when I have time to sew!”

Needless to say, having that dress didn’t transport me back to my London days nor did I ever get around to even cutting out the patterns for the things I had intended to make.

Letting go of these “I will” and “I shoulds” was totally liberating. I figured if ever really wanted to sew, I could always go out and re-purchase new material. So far, that hasn’t happened and probably never will.

5. At the end of the day, things are just things.

When I was a teenager, I was status-conscious and can remember saving up to buy a designer shirt, not because I actually liked it, but because it was by a designer I considered to embody sophistication. I kept it for years and it was one of the things I threw out in my first major cull.

While I like high quality things as much as the next person, at the end of the day things really are just things. The older I get, the more I value experiences and memories. If my home were to be totally destroyed in a fire, I would be upset, but all the material things I have could be replaced. I am not my things and my things aren’t me.

Getting rid of the excess stuff in my life has been nothing short of life-changing.

While not everyone may go to the measures I did, or have the same experience, the lessons I learned can be applicable to all.

Even those who don’t embrace minimalism may find some lessons here. At the very least, we can learn to love our things, but not be a slave to them or have them define our lives.

A Simple Approach to Getting Rid of Clutter.