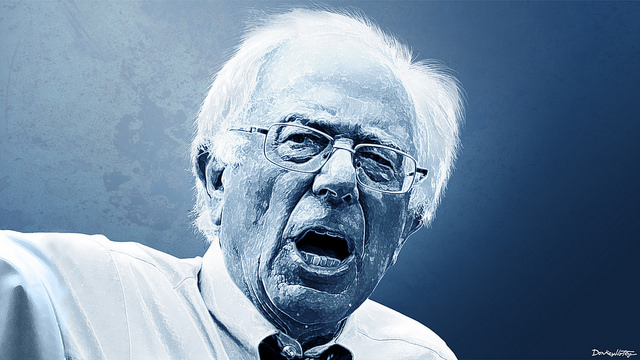 If you’re not familiar with Liberty University (I wasn’t), it is a private, non-profit Christian university located in Lynchburg, Virginia. The university describes itself as a “Christian academic community.”

So you may be wondering—why was a progressive presidential candidate like Bernie Sanders, even bothering to address the students of a conservative, Christian school?

Well, you wouldn’t be the only one wondering about that. Per Yahoo Politics:

“Sanders is perhaps the most liberal candidate in the 2016 race. In addition to his progressive positions on gay rights and abortion, he is a self-identified socialist and atheist. Liberty…is largely populated by conservative evangelical students and faculty who presumably disagree with Sanders’ politics. Yet…Liberty’s administration invited Sanders to address the student body during a convocation gathering…and Sanders, surprising perhaps even the officials who extended the invitation, accepted….Jerry Falwell Jr.[the current chancellor of Liberty and son of the school’s founder] agreed that many on his campus strongly disagreed with some of the senator’s political positions. It’s for that reason, Falwell told me…that he admires Sanders’ willingness to venture outside his comfort zone.”

Here’s an interesting tidbit, that has been making the rounds on Reddit, regarding Senator Sanders’ recent visit to Liberty University:

A former Liberty University student—a graduate, with his B.A. in Religion—posted a short sermon in response to the presidential candidate’s speech. This man, Jim, is not only a Liberty University alumni, but he is also an evangelical pastoral counselor.

Here is what he had to say (expert from transcript, via Reddit):

“I’m pretty much a card-carrying Evangelical Christian. I still subscribe to a conservative evangelical theology. And what that means, a lot of people get confused when they hear the word ‘conservative,’ they assume you mean politically. ‘Conservative theology’ means that I believe the Bible is trustworthy, I think that God inspired it, Jesus was absolutely real, and really died on the cross, and really did resurrect three days later; and I am an Evangelical Christian in that way…So, how did I come to find myself supporting Bernie Sanders? How did that evolution take place?

When I was watching Bernie Sanders talk at Liberty University, I was just really shocked, and something kind of magical happened for me, because as I watched that guy stand up on that stage, here’s what I saw. I saw a wild-haired Jew crying out in a hoarse voice, in a very forceful and forth-speaking way, he was convicting the Christian leaders and religious leaders in that University and calling us out for being complicit in the abandonment of those who suffer: “The least of these.” And siding with the powerful and the rich and the masters of this world. And he was convicting us, and calling us out. And we scorned him, and we stared him down, and with sour faces we thought, ‘Who is this whacko? And why do all these people seem to follow him, seem to like him? This wild-haired Jew, crying out from the wilderness of the political Left, in his hoarse voice?’

When I heard Bernie speaking in that way, when I saw that guy on stage at Liberty University, I saw John the Baptist. I saw the wild-haired, roughly-clothed John the Baptist…crying out to the religious leaders, the Pharisees of his day, calling them corrupt and complicit with those who have all the power and all the money and all the wealth, and for abandoning the people that God loves, that God cares about…That’s the wild-haired Jew that I saw up on that stage. I saw, and felt, the same voice coming from the Bible when I read about John the Baptist, who cried out in the desert to the Pharisees, warning them that Jesus was coming, the messenger of God. And that he was coming to restore justice, to proclaim the year of the Lord’s favor, and to value ’the least of these’ when the Pharisees had failed…And in that moment, something occurred to me, as I saw Bernie Sanders up there, as I watched him I realized: Bernie Sanders, for President, is good news for the poor…

As he said he wanted to do justice for those who have nothing and live homeless…I remembered the words of Jesus, who warned his disciples that there will be judgment, and on that day he will look to his friends, and he will say ‘Blessed are you, for you cared for me, for I was naked and you clothed me; I was sick, and you cared for me; I was hungry, and you fed me; I was thirsty and you gave me something to drink; I was in prison, and you came to visit me; I was homeless, and you gave me shelter.”

And those words echoed in my heart. As I listened to that crazy, hoarse-voiced, wild-haired Jew, standing in front of the religious leaders of the Evangelical movement, calling us to account, as [another] Jew once did before. Telling us that he intends to care for ‘the least of these.’ To clothe the naked, to shelter the homeless, to care for the sick, to set the prisoners free.

Yes. I am an Evangelical Christian. I believe in the Bible. I follow Jesus. When I look at Bernie Sanders, and I hear the things that he’s saying, it’s like he’s ripping them out of the pages of scripture. I would have to try to avoid the meaning of those words. I would have to bury my head in the sand to continue to support conservative policies. I am religiously conservative but I am not politically so…And so there is no contradiction between being a Bible-believing Christian and a Bernie Sanders supporter.”

Listen to the audio here.

So why is this evangelical Christian man’s statements on Bernie Sanders relevant?

Well essentially, it’s another fine example that Senator Sanders has something to offer everyone. He truly is a man for the people. He is a liberal candidate that even conservative Christians or religious folk can support (when typically, religious people tend to vote Republican).

It’s also noteworthy that Bernie Sanders is a man willing to step out of his comfort zone. He s willing to reach out and tell everyone what he’s all about.

This is great news, because he is going to need full support from a vast majority to get elected.

And he is on his way—it’s time for a political revolution!

Unity! Calling all Punks to Stand with Bernie.