Becoming Adept at Conversation: 5 Tips that Work even if your Subject Matter Sucks. 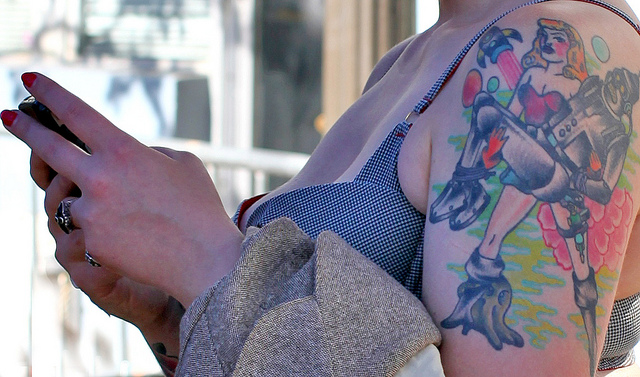 A woman, 30s, sort of a Demi Moore look to her, though less refined, walks into the elevator with me, talking to her phone.

Just the two of us, in a slow elevator.

I smile, press the buttons, and—

She’s fixated on her phone. My inner monologue starts writing itself, mostly in question form. Isn’t it easier to power off manually? I notice her nails are almost an inch long—how does she do anything? Okay, maybe it’s easier to voice-command. Does she use Siri for everything? Does Siri ever work well?

I remember that time Siri responded to us, saying that she didn’t have the maps for Malaysia when we were trying to look for the closest metro station in DC. I’ve never used Siri since, though I almost got to be her voice in China. Ugh, imagine that, I’d be the bane of every iPhone user’s existence. Well, at least my father would hear my voice this way.

Okay. I look over to her, awkward forced smile. Well, she’ll just have to go to the same floor as me.

“It’s a new phone, I’m trying to turn it off, it’s telling me to swipe, it’s not working.” My awkward smile exchanged for a generous few seconds of her attention before she goes back to her phone, forcefully pressing it, in all the wrong places, it seems.

“Isn’t it easier to turn it off manually?” Too many questions in my head—eventually one made it out.

Surprisingly, in the ever advanced world we live in today, we lose our abilities to do simple things, like turning off devices, and well, talking. Being sociable could mean a lot of things, but a good conversationalist it does not equate to.

We talk via our tech, into our tech, and with our tech, making real conversation with real people, in real time, less frequent occurrences. Few do it; even fewer do it well, because most people are out of practice. It sounds like a Millennial concern, which in 2015, counts for a heck of a lot.

In my experience, the best conversationalists are lecturing professors and children—which goes to show that it’s not about subject matter. I’ve sat through dreadful lectures and avoid children whenever possible. Content is important, certainly, it’s why we force ourselves through misery to consume mediocre sh*t. But conversing is an artform heavily shaped by style, and dictated through behaviour. It’s a thing of beauty, really, and once you’ve experienced beauty, anything less becomes mediocre.

A handful of seemingly simple things to try. Rudimentary? I’d go with foundational.

Beyond basic math, a Google search with “listening skills” will yield 17,700,000 results in just half a second. Why so much material? Because we don’t, and the world clearly needs it.

Self-accounting is great for deep reflection—do it in solitude, in front of a mirror, but not in front of company. If you want to see a good one man show, go see stand up, and see how terrifying it is. If you are anything less than a professional speaker, do something with much less risk, and much greater value. Listen.

Listening allows for you to connect. Connection is the prize, but it’s also the work. Most people are nervous because they don’t know what to talk about. Listen, and experience how liberating and great it feels with this problem solved. Listen, but don’t be a dead piece of wood. Respond, comment, sound back, ask questions…and see how the conversations grow.

By being present, you are in turn, valuing and validating the presence of your company, which does two things of magic: 1) their self-esteem increases, and 2) the esteem they hold for you also increases. Being held in high esteem is perhaps, the most noble of all places, which is why it doesn’t come easily. But it’s really not magic, it’s just learned and trained behavior over time.

Sounds like listening, but the focus here is on sincerity. No meaningful engagement is without it. Being genuinely interested enables you to pick up cues and hints—emotional, cerebral, and physical—so much better, faster, and more accurate than feigning it, which is deceptive and arguably manipulative. We all know someone who simply can’t take a hint—don’t become that person.

On a level of conduct, being genuinely interested is a mark of being respectful. Showing respect is rudimentary of all good conversationalists. The sharpened awareness that stems from it is a bonus. Plus, you might hear something valuable, without having to pay subscription/tuition! This is, in a way, the gift that keeps on giving.

IV. Be open to new ways of thinking.

New ways of thinking, at its worst, will inform you; at its best, will enrich you. Knowledge is power—you can’t lose this one.

V. Go beyond the charms; offer your art; speak to affect.

A good conversationalist is naturally charming; the reverse is not always true. When it’s not true, it’s disappointing, one could even argue—deceiving, and deception is just garbage.

Good conversationalists are artists, artists are givers, charmers are takers. Because most communication is non-verbal, the same line, said differently, have different effects. The way your words land is an art in its own right. Acting lessons, if nothing else, help with this. Get a coach, or just start saying things differently—repeat what others say in your head, people watch and be a fly on the wall. Watch good films and actively learn.

The best conversationalists have always had an affect on me. The way they think starts to influence the way you think, and before you know it, you start to share mannerisms in your speech and draw from the same vocabulary. Studies have shown that people who share the strongest relationships also have very similar ways in which they think. It’s the mental bond that has the strongest hold. That’s one reason one night stands are fleeting and tasteless. Always more seductive to be in someone’s head than someone’s bed. Mental space is a scarce commodity, but good conversationalists reside there.

Good conversationalists also reside in brick and mortar buildings, in that offline world. So stop reading this. There isn’t anymore.