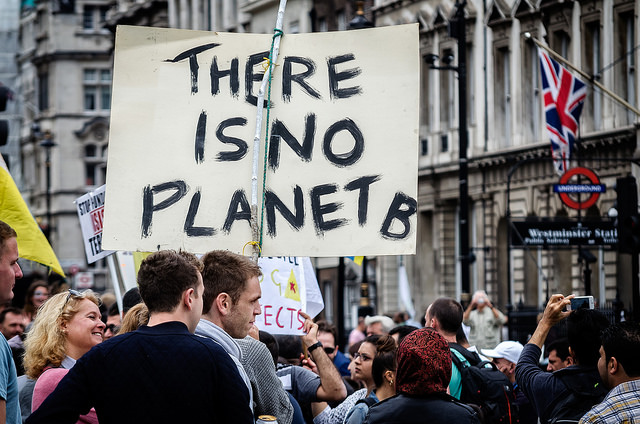 Cowspiracy: The Sustainability Secret is a shocking and groundbreaking feature length documentary following filmmaker Kip Andersen as he uncovers the single most destructive industry on the planet.

The controversial film had setbacks as financial backers dropped out and many organizations refused to be interviewed.

Anderson, like a majority of Americans, considered himself an environmentalist and made a heartfelt attempt to recycle and reduce waste. After some research, Anderson found out that his efforts were minimally effective when he discovered that rainforest deforestation, huge amounts of greenhouse gases and CO2 emissions, and the extinction of many species were directly linked to animal agriculture.

The film shows that you cannot be an environmentalist if you still eat fish and animals.

Looking at the links between livestock and climate change, Cowspiracy determines animal agriculture is the main cause of deforestation, pollution and water consumption.

The film suggests that despite our best efforts to minimize water consumption and reduce our waste, it is only a token gesture compared to the mass scale damage caused by animal agriculture. Despite taking measures like driving hybrid/electric cars, taking shorter showers, recycling, and using energy saving bulbs, personal changes like these will make little difference to global warming.

The documentary also points out that protection for expanded areas of the ocean will not protect our ocean animals, nor will keeping lumber operations out of the Amazon save the rainforest. There is also suggestion that growing food organically, even on a commercial scale, does not offer protection for the land.

Anderson explains that the leading cause of “dead zones” in the oceans are due to the huge amount of pollution caused by factory farms and the chemically produced feed crops that the animals consume.

One of the most shocking things that Anderson came across was the new implementation of ag-gag laws which are being put in place to censor whistleblowers, investigators and journalists from exposing abusive practices in slaughter houses and factory farms.

Ultimately, Cowspiracy looks at ways forward for the growing population on earth to find ways of implementing global sustainability.

“I feel that due to the name ‘Cowspiracy’ many people are unwilling to watch it as they feel it is about the suffering taking place in factory farms. People forget the full title which is Cowspiracy: The Sustainable Secret and that’s what it’s about, sustainability. Some vegans as well as non-vegans will not watch it just because of the name.”

Many people cannot bear to watch animals suffer and they do not want to consider opening themselves to feel and empathize on top of the uncomfortable idea of changing their dietary habits.

Cowspiracy, is different to other documentaries, such as Earthlings, as it is not necessarily concentrated on animal ethics. It is on the sustainability of our planet and climate change, which people can connect to without feeling uncomfortable and emotionally disturbed, so it bridges a gap to veganism even though it may not necessarily be a vegan documentary.

For vegans who debate with non-vegans, often times emotions and ego get in the way, but with Cowspiracy, you’re debating with facts and you cannot argue with facts.”

Initially the funding got pulled when the backers realized the motive of the film, so it ended up being funded solely by Anderson. Fortunately an Indiegogo crowdfunding campaign, raising a total of $117,092, helped to enable the release of the film.

These are some of the facts the filmmakers found while carrying out research for the documentary:

51 percent of all worldwide greenhouse gas emissions are from livestock and their byproducts, which produce 32,000 million tons of carbon dioxide (CO2) every year.

Livestock is responsible for 65 percent of all human-related emissions of nitrous oxide, which is a greenhouse gas that has 296 times the global warming potential of CO2. It stays in the atmosphere for 150 years.

Agriculture emissions are expected to increase 80 percent by 2050.

Benefits would be seen immediately by reducing methane emissions (as opposed to measures taken to reduce fossil fuel usage, which take decades).

80-90 percent of U.S. water consumption is used by agriculture.

56 percent of water in the U.S. is used to grow feed crops for livestock.

It would take over 20 years and approximately 43 trillion dollars to convert to wind and solar power.

Californians use 1,500 gallons of water every day per person. Half of that number is associated to meat and dairy products.

To produce one pound of beef 2,500 gallons of water are required.

To produce one pound of cheese almost 900 gallons of water are required.

To produce one gallon of milk 1,000 gallons of water are required.

Although it seems very difficult, if not impossible, to force the industries to make significant changes, we can all help to save the environment immediately by altering our diets.

Even for those that do not want to choose the option to be vegan or vegetarian at this stage, just by reducing meat consumption and helping to raise awareness like many others have done will collectively make a difference.

We do not need to leave it to the industries to make the choices for us; we all have control to make that choice each and every time we eat.

If we are passionate about saving the planet, we have to consider what is more important, eating animals today, or saving our planet for our future generations.   This documentary is having the same eye-opening effect that Blackfish had when it exposed what had been kept hidden behind the scenes at SeaWorld.

Overall this documentary is swiftly changing people’s perception about the use of animals in the farming industry.

Anderson urges everyone to share this information, saying we will one day look back on today’s agriculture and shake our heads with disbelief. Anderson believes everyone should have access to the research he carried out so that we can all be accountable for our individual food choices and how those choices impact the planet.