Finding the Path of Courage. 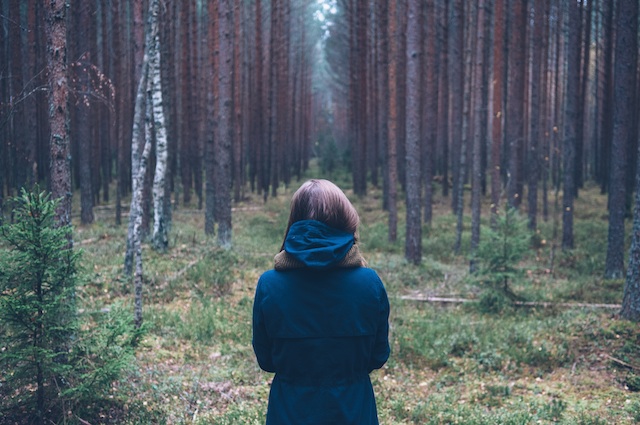 It’s late 2000 and I’m freelancing for a small local paper in my current home town, Whistler BC.

My editor has assigned me a story that requires me to call and interview one of the movers and shakers in town. I’m 25 years old, I’ve been writing articles since I was 16 and in the last four years I have lived in London, Chamonix, France, Niagara Falls and now Whistler.

I consider myself a brave and courageous woman, living a fearless and exciting life.

Except this phone call is freaking me out completely.

My then-boyfriend—who happens to know this mover and shaker—is supportive and encouraging and holds the phone out to me.

I shake my head.

He’s perplexed and shakes the phone at me.

I shake my head again and realise with horror that I’m about to start crying. That I am crying – I’m crying in fear and terror at making this piddly little phone call. I turn away in shame, shoulders shaking, confused, fearful and terrified all at the same time.

While I have yet to start the deep personal journey that would transform my life, I know enough to realise that this is an out of context reaction. Why am I freaking out so much over a short phone call?

Eventually, my supportive and caring boyfriend calms me down, talks me into the phone call and holds my hand while I make it. The relief and exhilaration when I get off the phone is palpable.

I did it. I faced into my terror and fear, and I made the call.

This is courage and it’s the first time I can recall it showing up in my life—despite this idea that I had of myself as brave and fearless.

Truth was, I’d spent my entire life running from situations that challenged me, or made me feel afraid, or that produced terror. I’d learned long ago to rationalise my running with logic and reason, and I often hid the running behind the guise of moving towards something else.

But as a kid, I’d never been taught how to deal with difficult situations—at least, not that I remember. I don’t recall facing into challenges with a supportive and caring cheerleader beside me saying

You can do it, it’s okay to feel afraid, just take the first step, I’ve got you if you fall…

This isn’t because my parents weren’t supportive and caring either. It’s because I was one of those kids who rarely came up against any fears or limits until it was too late. I was smart and physically adept. I breezed through school, barely ever studied, and walked away from high school awarded Runner-Up to Dux with a careless shrug of my shoulders.

Unfortunately all that early and easy success set me up for spectacular failure because I never learned how to deal with my own incompetency. I didn’t know how to feel inept, inexperienced, naive and do it anyway. I never had an opportunity to build my courage muscle.

Because that’s what we need when we’re growing up—opportunities to practice courage.

“Courage is like—it’s a habitus, a habit, a virtue: You get it by courageous acts. It’s like you learn to swim by swimming. You learn courage by couraging.” ~ Mary Daly

The problem was, by my mid-twenties, when something required courage, my patterns of avoidance and running were so well-ingrained I defaulted to them instantly when faced with anything that made me feel incompetent or afraid. I would do what ever it took to feel competent again—which usually meant avoiding that situation, not leaning in and mastering it.

It was the compassion of my boyfriend that modelled a different way to be in situations that required courage. He provided an external example of the internal voice I needed to cultivate.

Of course, I didn’t realise this at the time, and it would be another decade before I would consciously learn to cultivate courage, but the seed had been planted.

Now, living courageously is a touchstone in my life. Not because I’m any kind of hero or courage master, but because I’ve learned that leaning into situations that require courage causes less suffering in my life.

If I had failed to make that phone call, I would have felt guilty and ashamed of my behaviour. I would have known I was letting myself down.

I would have known that I was taking the easy way out.

Instead, with the right support and because the phone call was a manageable step, I discovered the exhilaration of facing down fear and moving through terror.

Of course, after that there were countless moments when I did take the apparently easy road and I didn’t face down fear. I suffered because of it—I suffered deeply and eventually I learned. While it seems harder in the moment to face those fears and move through the terror, in the long run, it is the far easier path to take.

That shift in perspective—from the immediate to the long-term impact—helped me learn to choose courage over avoidance.

A pivotal moment came when I discovered that courage had originally meant ‘To speak one’s mind by telling one’s heart’.

However in the years between that one phone call and that particular relationship, I’d internalised the compassionate and caring voice of my ex-boyfriend. This was how I spoke to myself as I learned to speak my heart and my mind.

And yes, the relationship ended, I’m a single mother and I’ve been alone for the past five years. But I finally spoke my heart and my mind in that relationship and I am no longer afraid to do so.

I’ve learned that courage comes in the small moments of our lives when we make those decisions to step up, speak up or show up.

Courage isn’t the big flashy moments of heroism. It’s the daily decisions of everyday life. Every time we take the long view and make the hard choice, we develop more courage and our lives get a tiny bit easier.

And if you’re not sure if you’re choosing the path of courage, you just have to ask yourself, am I speaking my mind by sharing all of my heart?

Then you can follow that signpost and speak your heart.

That’s where you’ll find your path of courage.

3 Mantras for Coping with Stress.