Football & Dogs: Life Lessons from the People we Meet. 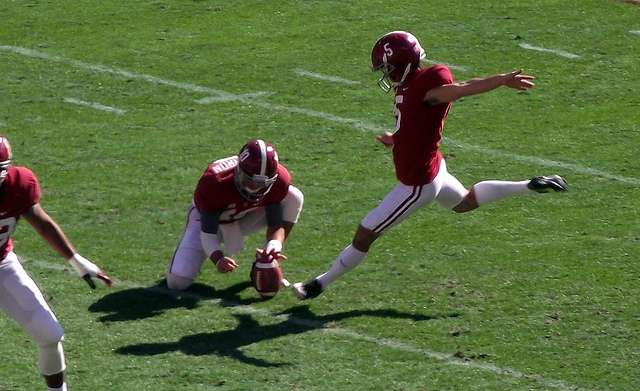 Let me tell you about Bob.

When I sat down recently at the ATT Stadium in Arlington, Texas—I found myself next to man with unruly hair and an un-groomed beard that was more salt than pepper.

He was wearing his team’s colors (crimson and white) and looked as though he’d woken up after a late night full of bad decisions. He looked in the mirror and said to himself, “I’m good.“ Bob could have used a shower.

At his feet sat an enormous Weimaraner, with an obvious thyroid condition. He told me the dog’s name was “Bear”—no doubt homage to Alabama’s legendary coach, Bear Bryant.

It would have been easy to avoid getting to know Bob during the roughly two and a half hours we both cheered and roared our shouts of “Roll Tide!” But I’m a dog guy, and Bear was easy to like—as he laid on his side, occasionally managing to slap at the water bowl with his pink tongue—so, I asked Bob how he’d managed to get the 120-pound canine into the stadium.

“He’s a seizure dog,” Bob said, as he gulped down a second or third beer. (My guess is that was just what he had consumed inside the stadium.)

As the night progressed, Bob entrusted me with the dog as he left to get another beer, smoke a cigarette or check on the cell phone he was trying to recharge just inside the club level doors. Despite the eruptions of the crowd, the dog sat patiently, rising only a few times to look for his master.

“How far away can you be for him to recognize you’re about to have a seizure,” I asked, hoping I wasn’t prying.

I couldn’t help but wonder if Bob’s poor hygiene might have been an effort to ensure that Bear had no trouble picking up his scent. (I certainly wasn’t.)

“If he smells something, he’ll sit up and bay like a hound chasin’ a fox. Everybody in this place will see him,” Bob added.

I wondered if the cigarettes and beer were a wise choice for someone who was at risk of seizures, but thought better about asking. It was Bob’s 57th birthday, and I decided he was old enough to make his own decisions. He even pulled out his Hawaii driver’s license to confirm that it was indeed his birthday.

He had flown in from Maui, as he did every weekend the University of Alabama was on the football field. Bob told me his son was a pilot, and he had been making the trip since he had moved to Maui, almost 16 years ago.

“How did you get from Alabama to Maui,” I asked.

Bob told me he sold everything he owned in 2000, including his company. He had moved there with two suitcases and a laptop.

“Best decision I ever made. I came back from a trip to Waikiki and I was hooked.”

Bob had been in business with international investors, and he told them he wanted them to buy him out. When they offered him more than he had wanted for his interest he said, “Well let me think about it…” and quickly added, “Okay!”

I don’t know if Bob’s story had been embellished, but he told it with such conviction—and because of his absolute lack of concern for his own appearance, I tended to believe him.

You can tell a lot about a man by how he treats an animal, and Bob treated his companion with such care and appreciation that I’m willing to give him the benefit of the doubt.

As the night wore on, and Bob drank more and more beer, a steady stream people would stop to pet the dog and engage the man in conversation. Beautiful young coeds, small boys and grown men all wanted to meet Bear. Bob was part of the package, and he was kind and engaging—even as he flirted with women of all ages. He was never disrespectful and seemed to enjoy the company. And they enjoyed his.

There was something childlike in Bob’s demeanor. But as I sat beside him, I realized Bob was at the game without any friends—except for Bear.

I was sitting with a lifelong friend and his family—people I love, who I think love me. We would all ride home together, but Bob would take a cab back to his hotel alone and fly back to Maui by himself. There was a sadness in him, and I hoped that maybe for a little while, his sadness had been assuaged by the the people who stopped to talk to him, Bear and perhaps by our conversation.

I don’t know if Bob will remember me, but I will certainly remember him.

The man looked like a gaunt version of Santa Claus, and he was almost as jolly. I’m glad I took the time to get to know him in the midst of 45,000 other fans. We “high fived” and “fist-bumped” several times and found a brief, but nonetheless meaningful, moment or two in an unlikely place. I went to Texas to watch a football game and connect with people I love. I got all that, and so much more, thanks to Bob.

If there’s a lesson in all this (and there is for me), it’s about taking the chance to get to know someone you might not otherwise think could affect your life in such a positive way.

Life is about so much more than football and dogs, but then again—both of them worked a little magic for me on that night in September at ATT stadium.

Wherever you are Bob, “Roll Tide.” Give Bear a scratch for me.