The Ghosts I See & the Ghosts in Me: How Yoga Releases my Spectres. 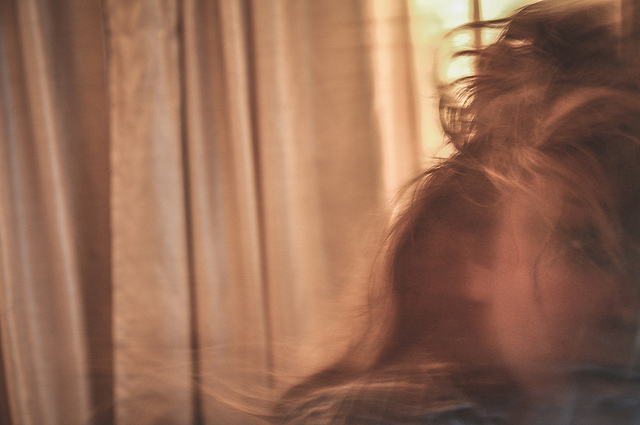 “I always feel like someone’s watching me. Tell me, is it just a dream?” ~ Rockwell

I believe in ghosts.

There, I said it.

And lots of other people do, too.

I know this because I picked up some chips and guacamole the other night after yoga, and written on the bag was an essay by author Amy Tan, titled: “Two Minutes About Ghosts.”

Ghosts are among us, she writes. And she counts herself as one of what she says is 42 percent of Americans who believe in ghosts, too.

I have followed Amy Tan as a writer. She writes captivating stories about the intricacies of families throughout many generations. And it’s no matter who is alive and who is not. Her characters love and argue and whisper and holler, often from one realm and into another.

When my son was several months old, I used to rock him in the nursery, and I remember feeling so peaceful and secure. I’d feed him and sing to him and always feel so sure. I was positive he was supposed to be with me, and that together with his sister we’d always be three.

But I also remember something more. I’d watch as he’d stare across the floor, engaged by something I couldn’t see. And it was then that I knew that we had some ghostly company!

On my bag of chips and guacamole, Amy Tan writes:

“Defying science and reason, my mother sailed into my bedroom the night after she died, looking like a statically charged hologram of light. I was punched breathless with the strongest emotions I have ever felt and they are now stored in my intuition as a writer.”

Now, I’ve never seen a ghost fly into my room, but I do believe some spirits have made their presence known, namely my grandmother and my great aunt.

Aside from appearing in my freckles and in my taste for butter, they show themselves at every milestone by turning out the lights. Whenever something’s going on, whether good or bad, several bulbs burn out, and it’s then that I know these two are about.

They also hang around when I write at my kitchen table. I turn on my grandmother’s chandelier lights and wind the clocks, and I feel as peaceful and secure as when I rocked my son so many years before.

And just the other day, a friend came over to help around the house. He did some spackling and some painting, and when it came time to wash the brick walk, he grabbed a pair of boots from his truck. And later when we sat down to lunch, he kicked out his feet to exclaim his luck.

“Do you know whose boots these were? ” he asked, as I looked over to see. And before I could guess, he said, “These were your uncle’s. He was always good to me!”

This was a surprise! It hadn’t been that long since my uncle had passed away. Immediately, I sent a text to my cousin about her father’s boots. And her response surprised me, too. She wrote back to say that this very day was her father’s yahrzeit, the Jewish anniversary of his death.

And here was my friend in his boots, and it was then that I knew my uncle had joined us for lunch.

Such spirited visits aren’t ever actually scary. More often, they are simply reassuring. But I have to admit to a few occasions when I’ve awakened in the night to a feeling that’s not alright—when there is a little fear because I sense a spirit is near. At times in the dark I’ve opened my eyes, and I’ve seen a greenish glowing close by. But what I do then is simply roll over. I turn my back and pay it no attention. And I don’t think about it anymore, as I drift off back to sleep for the rest night.

Amy Tan writes about her husband who was never a believer until the day he heard the tune to Jeopardy whistled behind his back. And then he heard it again while he was in the shower. She says it took him being naked and alone, but he finally believed!

But to believe what we see, we have to see what we believe, and that always depends on what we perceive.

At yoga I practice at a studio with a ceiling that’s been insulated with some kind of gray foam. Surrounding the duct work are ripples of foam that form various shapes and shadows with different dips and dents.

And throughout the practice when our drishti, or gaze, has us looking up, I see the ceiling’s sights, the formations in the foam like clouds across the sky. And I wonder about what it is I think I see. Are the images only there because they are seen by me?

At the end of practice, I lie in Savasana with the other yogis, mirroring the shapes in the ceiling as formations across the floor, like our own clouds across the sky. And I open my eyes for a brief scan of what’s above, before closing them for a scan of what’s inside:

I see mushrooms and someone in a forward fold.

I see Michelangelo’s angels from the chapel of old.

And I see lovers and mountains and so much more.

And I see Papa Smurf just above the door!

And when I move through the practice,

something happens to me.

I loosen enough to set myself free.

And out pop the ghosts of the innermost me.

They come into focus as I twist and reach.

I see them all, and I acknowledge each.

There’s the little one who needs holding tight,

and the older one who tries to do right.

And there’s even the one who was the good wife,

who finally woke up to her very own life.

The practice uncovers all who I’ve been

and strips away each until it’s just me in the end.

And I lie there as a form on the floor,

ready to be shaped by whatever’s in store.

And I greet this new self with a silent sigh,

and to the others I bid a heartfelt goodbye.

And I can’t believe that so long ago

what I feel was described by Michelangelo.

I saw the angel in the marble, the sculptor said,

and I carved until I set him free.

And that’s exactly what the practice does to me.

It carves and it carves until I come to be.

And it releases the ghosts that none of us see

…except for that smurf who’s still watching me!

All My Ghosts Come Out In Savasana.