A Zen-Like Metaphor for Healing & Moving On from Painful Past Relationships. 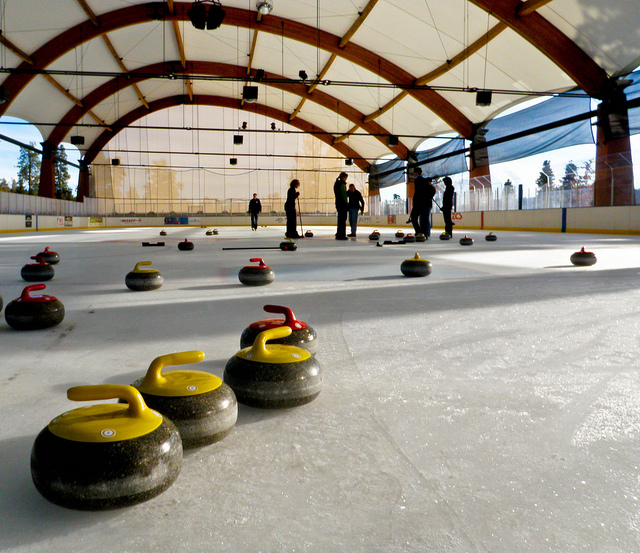 I wish I had the ability to pick up on the messages the universe sends me a little faster.

I swear my skull is at least three times the thickness of the average male, so external stimuli has to fight pretty hard to get through. It’s not that I don’t understand, it’s the implementation that kills me.

For example, in 2002 I was working for the Olympics in Salt Lake City and absolutely loved the experience. It was the first time I had ever seen the sport curling, and I was mesmerized by the Zen like quality of the sport. There was something peaceful about the way the captain would slide along with that big granite stone as if he would be pulled along for the ride before gently letting it go on its trajectory. This image of releasing the stone haunted me for the next few years.

During this time I was in a fairly unhealthy relationship. We were both hurting from the relationship, and like most people who are hurting, we took it out on each other.

My abuse came in the form of making lofty promises I had no way or intention of actually keeping, such as promising never to lie again, or that I would have somehow changed since our last fight. Her abuse of choice was never letting me forget I screwed up, and saying the cruelest possible things when she was hurting. The sad part about it was that I believe we truly loved each other, yet were so wrapped up in being hurt, we were unable to show it or see it.

By far the worst part about saying things in the heat of the moment, is that they can’t be unsaid, and the damage is done no matter how many times you apologize. There’s a saying about smashing a plate against a wall, and then trying to put it back together by telling it how sorry you are.

One day, long after the relationship had ended, I found myself replaying some of the horrible things she had said to me in those heated moments. I knew these things were just said to hurt me, but one of the problems with verbal abuse is that it plants a seed where you ask yourself if what they are saying could be true or if you somehow are deserving of it all.

I began to pick things she had said, taking them entirely out of context to make them even more painful than they were ever intended. Picking jabs from this fight and adding them to bards from some other unrelated argument. I had a lot to choose from so this went on for a while.

Soon, I was spiraling.

I wish I could say this was type of behavior was a rare occurrence with me, but it wasn’t. I would play this game as I would fall asleep at night, or whenever I thought about starting a new relationship. In stupid, prideful, and ego filled moments, I wanted to prove to her that no one could kick my a** better than I could, so I would take the pain she had given me and then pour my own mixture of salt and lemon juice into the wound.

In the darkest moments I feared she might be doing the same thing to herself, which made me hate myself all the more.

Then I remembered the Zen like quality of the curler, releasing the stone.

I had to let it go. It wasn’t healthy. She had moved on, and my friends were all telling me to find someone or something new.

Suddenly I was holding the stone, sliding along the ice toward a mountain of insults, lies, and other painful things we had said to each other during out tumultuous time together…and finally let it all go. It took 10 years longer than it should have, but I had finally let it go. I was glad the curling image had haunted me for that past decade, otherwise I might still be holding on today.

Let go or be dragged.

Let go and be free.

How can we Emotionally Move On from a Break-Up?