Fear is an Illusion: How I Broke out & Found Freedom. 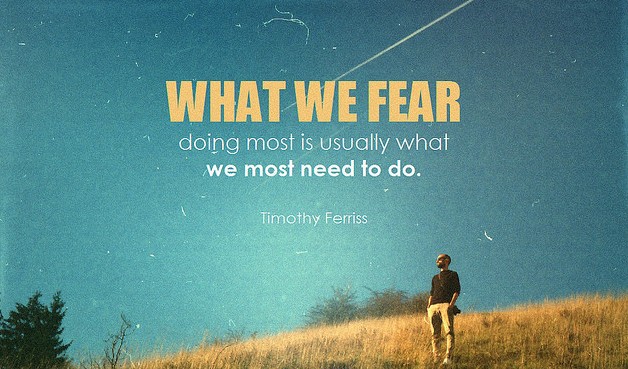 The thing about fear is that we create it.

It’s an illusion—it’s not real.

Fear dictates our choices and actions all through life, and we don’t even realize it.

We create scenarios in our minds, and then we feed off them. Fear is a reaction to a perceived threat—imagined or real.

Meaning often times, the threat is not even real. It may be a threat, or it may not be. Often we create the threat. We create the scenario that feeds the fear. We let it control us, and the imagined scenarios we draw up in our minds never actually take place. It never happens.

We let fear control us and keep us trapped. It prevents us from taking part in things we would really like to do, and we make up excuses and lies in our mind about how we aren’t interested in said activity anyway—so why bother doing it? We tell ourselves,“Nah that’s not for me,” and we don’t even try.

When we don’t understand something, we judge it. The fear comes when we allow the non-understanding of something to threaten us.

The power step here is admitting that it is not the outside thing that is actually the threat—it is our mind creating the threat. Is the threat real or imagined? Is it based off of someone else’s information? Have I explored it myself?

Because we are too ensnared in our comfort zones to push outside of them, we stay in them—comfy and warm, living safe little lives that are more of just an existence. We live there in the illusion of safety and security, pretending we have a grip.

I’m a bit extreme—I’ve always taken to adrenaline based sports—going fast and living dangerously. To many people that knew me early on, I was the fearless one. As it turns out, I was actually controlled by fear, it just wasn’t the same type of fear that most people have. I had no fear of threat to my physical body, so to others I seemed fearless, because I happily jumped into activities that scared many people.

I lived many years behind a wall—hiding my true soft, loving self—because I was too scared of someone not liking me and stomping all over my soft, little feelings. So I hid them and hid them well.

My perceived threat was that if anyone really knew me, they were going to judge me—and hate me. I feared I wouldn’t be good enough in their eyes. This was a completely unrealistic fear, yet it dictated my life for over 30 years. I wouldn’t hesitate to jump from a plane, but if you asked me to get vulnerable and talk deep emotions with another, I would shut down from fear.

I couldn’t do it. I wouldn’t. Being hard and tough gave me the illusion of security. Of course, this was all auto-pilot stuff, happening just below the conscious surface of my mind. I wasn’t aware of this pattern until I did some seriously deep self-searching and got into a meditation, yoga and self-observation practices. Then I saw the absurdity of what fear actually is—an illusion.  I began to observe my mind’s tricks instead of letting them dictate my behavior.

For example, I spent all that time running amok, consistently putting my physical body in jeopardy. Did I get hurt? Sometimes. I still have some pesky injuries that never quite healed right. They act up when it rains, or it’s cold, or I’m tense.

I realized somewhere that it didn’t matter how much I hid behind walls and tough exteriors. I could still feel the pain, even though I was denying my sensitivity to it. I realized that my perceived defenses from getting hurt emotionally were also just a big fat illusion that tricked me into thinking I was safe. In accepting this, I have found so much freedom. I now live in vulnerability—and guess what? Not once has anything happened that was remotely close to the scenarios my mind used to create involving judgements, dislikes and being abandoned for who I was. It just didn’t happen the way my mind played it out.

No one ran screaming away from me.

Aha—that’s when I saw it all. All of the Buddhist teachings I had been meditating on about impermanence, mindfulness and being present—they all hit home for me in that moment, as I saw the absurdity in how I had been living my life. Here is where I realized that it is perfectly okay to feel scared when we are taking a risk. Whatever the risk is—physical, financial, emotional—we all feel differently about which risks scare us and which don’t. The key is not to let “I’m scared” turn into fear. Scared is a feeling—fear is a control tactic of the mind that tricks us into feeling safe, but “safe” is an illusion.

Whether or not I feel “safe” at any moment, doesn’t change the odds of walking outside and getting hit by a car. The outside circumstances and threats stay the same, its our inner response to the world that creates the need for the illusions. It does not matter if I am afraid of spiders or not—the threat from them does not change.

Mastering our fears is about taking our power back. It’s about taking control and charge of our own lives. It’s about not allowing perceived or actual threats to rule our lives. It’s about facing things we don’t understand, or feel threatened by, and challenging ourselves to remain open long enough to examine our fear. It allows us to determine if there really is a threat or if the threat is perceived. It lets us form our own beliefs and rewrite them as they no longer serve us.

After all, can we really claim freedom if we are driven by fear? Let us instead practice pausing, when we want to shut down in fear, and admit that is what is happening. If we can just start there—admitting our patterns of closing off in fear—great things can happen.

When we Face our Fears, we Find Freedom.