Ganesha: Lessons from The Elephant-Headed Lord. 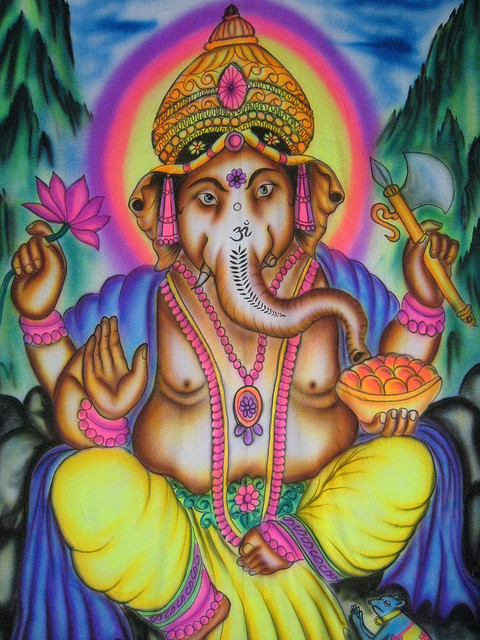 Ganesha is the Hindu elephant deity known as the remover of obstacles and the Lord of success.

Three years ago, a shop owner gave me a calendar as a free gift for the New Year. When I looked at the calendar, I saw an elephant-headed Lord with a big trunk.

In awe of the complicated figure in front of me, the shop owner told me, “He is Lord Ganesha, look him up.”

That night I did look him up. I was curious about the hidden symbolism behind his figure. Back then, I only knew Lord Shiva. To my surprise, it turned out that Lord Shiva was Ganesha’s father.

Today, the calendar is still hanging in my room next to another big poster of him.

Below is the story of Lord Ganesha and the symbols attributed to his figure.

If we look closely at each of the symbols, we can learn provocative lessons that can serve us well in our daily life.

The story of Lord Ganesha:

One day, Goddess Parvati, the wife of Lord Shiva, was at home getting ready for her bath. Parvati needed someone to guard her chamber as she didn’t want to be disturbed. She created a beautiful, young boy out of the sandalwood from her body. She gave him life by sprinkling the water of the Ganges on him and entrusted him with guarding the door.

Shiva returned home and wanted to come inside. The boy blocked his path as Shiva tried to enter the chamber where Parvati was bathing. Lord Shiva was enraged as the young boy stood his ground. Not knowing he was his own son, he cut off his head.

When Goddess Parvathi learned of this, she was grief-stricken. She saw her only son whom she created lying dead with no head. She asked Lord Shiva to send his soldiers to fetch a head for her son. She demanded the soldiers to come with the head of the first creature they encountered.

The men hurried and came upon an elephant. They immediately took the head to Lord Shiva, who quickly attached it onto the body of the slain boy and gave him life once again. To further appease his wife who was in grief, he promised that her son would be worshipped first, before all other Gods.

Ganesha is prominent in temples. Here’s what we can learn by breaking down the symbolism of the Elephant-Headed Lord’s figure:

The elephant is very important—it is the largest and strongest of animals of the forest. Despite their brute strength, they are affectionate, loyal, kind and lovable creatures.

We should be like the elephant. We should always remain kind and filled with love. Our gentleness is what defines us in this world and we must excel at it.

Ganesha has a head that is larger than his body. The symbol behind the enormity of his head is thinking big. Ganesha is ambitious, dreamy and takes himself out of the regular picture to inspire new ideas.

Sadly, we are constantly stuck in doubt, worries and fear. We should instead dream big and think outside the box.

Ganesha’s small eyes demonstrate the importance of concentration. We mostly lack concentration when it comes to our daily life and activities. We are rarely focused on one thought or one activity.

Concentration means awareness. We should train our minds to become more aware without outer distractions that can threaten our concentration abilities.

Ganesha has large ears because he listens well. He has gained much wisdom from listening.

Our ears must be like Ganesha’s. We should retain that which is good but we do still need to hear all requests—whether good or bad. To listen means to respect, to gain wisdom and to be aware. Practicing those three attributes will elevate our consciousness.

The small mouth refers to talking less. Ganesha hears everything attentively but he doesn’t talk as much as he listens.

Unfortunately, we tend to be the complete opposite of Ganesha. We hear little and talk big. We should take after Ganesha and learn to talk less. The less we talk, the more we will hear. Sometimes wisdom comes from silence; not from words.

Ganesha’s big trunk is a symbol of high adaptability. The elephant’s trunk is one of the few instruments in nature that can perform subtle actions: it can pick up the tiniest of needles, push down a massive tree and carry huge logs to the river.

Like Ganesha, we should have high adaptability. This signifies the need for us to be able to develop our intellect in both the spiritual and the material world. We should use our large flexible trunk to perform all good actions.

The one tusk symbol is significant. The symbolism behind it is that the wise person is beyond duality. Ganesha doesn’t believe in good and bad, love and hate, beauty and ugliness. He has reached beyond duality and is capable of seeing all with one state of mind.

We constantly create duality in everything we do. We are caught up in the good and bad of our lives and highly identified with each cycle. To live beyond duality means to live in peace.

8. Axe in his right upper hand

The axe in Ganesha’s hand is symbolic of cutting off all earthly attachments.

In contrast to this ability, we humans are attached to belongings, persons and events. We have created a bond that is unbreakable with almost everything in this world. Nevertheless, Ganesha demonstrates how we must hold an axe and cut off all of that which keeps us attached.

9. Lotus in his left upper hand

Ganesha is holding a lotus in his hand, which defines enlightenment and determination.

Enlightenment is the purpose of all sentient beings. We didn’t come here to only pay bills and work. We were born onto this planet in order to reach another level of consciousness. Also, we should be purified like the lotus flower in order to reach this state of enlightenment. Like the lotus, we should be determined enough to grow in muddy water and still be able to rise above all murkiness.

10. Dish of Modaka in his palm

The sweet Modaka is symbolic of the sweetness of the realized inner self.

As we travel along the path of spirituality, abundant rewards will be granted. We should be like Modaka—hard from the outside yet sweet, satisfied and contented from the inside.

Ganesha’s large belly is said to contain the whole universe. It is symbolic of digesting all the good and bad in life.

It is the same way we should live our lives. We must be able to accept and digest whatever experiences we go through—whether good or bad. Our bellies must be wide enough to accept everything with contentment.

12. One leg folded up and the other leg resting on the ground

The leg on the ground tells us that we can live in the world like anyone else. But the leg pointing upwards demonstrates that our concentration and meditation should be ever focused within.

Like Ganesha, our purity shouldn’t be blemished by the polluted earthly attachments. In fact, we can live in this world but remain unpolluted by the materialism and negative qualities of its surroundings.

Below Ganesha stands a dirty rat. The rat is among the greediest of all animals. It nibbles at whatever is available and eats everything it can.

We shouldn’t crave new experiences or new tastes. If we do, we will become ruled by desire and greed. We must keep our senses under control.

14. Food at the feet of Ganesha

At the Ganesha’s feet is often spread a huge array of different kinds of food. The food represents material wealth and power.

This indicates that these material benefits will always be available for us, but we shouldn’t be attached to them, and therefore, they will not hinder our spiritual progress.

I hope Lord Ganesha has inspired you the same way he inspired me!

The Times of India