How Sun Gazing Transformed My Life. 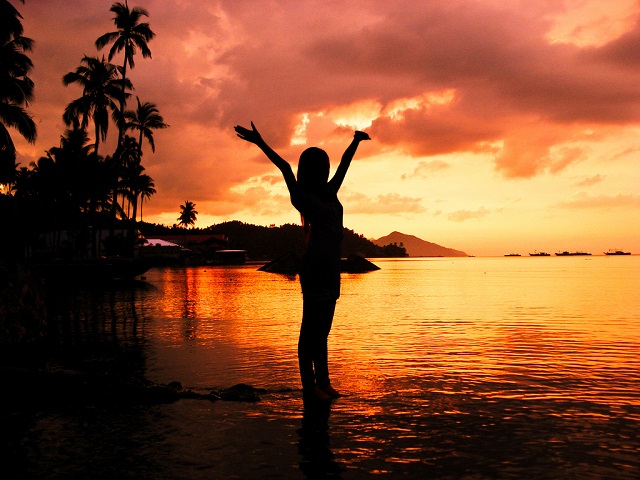 Editor’s Editor’s Note: elephant journal articles represent the personal opinion, view or experience of the authors. As an independent media outlet, we cannot verify the validity of any claims made on this website. This website is not designed to, and should not be construed to, provide medical advice, professional diagnosis, opinion or treatment to you or any other individual, and is not intended as a substitute for medical or professional care and treatment.

“The sun does not shine for a few trees and flowers, but for the whole world’s joy.” ~ Henry Ward Beecher

Have you heard of sun gazing?

I first heard about it when I got into earthing—the health boosting habit of walking barefoot upon the earth. The more people I talked to about earthing, the more I heard about sun gazing. Not surprisingly, these two lifestyle habits draw the same crowd.

And what could be more natural and seemingly beneficial than harnessing the power of natural forces to boost spiritual and physical health?

Earthing uses the influence of the Earth’s negative ions to boost immunity; basically tapping into the planet’s vibrational frequency to boost your own.

Sun gazing uses the process of photosynthesis, same as plants and trees do, to nourish and heal the body.

Sun gazing should be practiced—you guessed it—while barefoot as much as is possible.

From my circle of “earthers” I learned about Hira Ratan Manek (HRM). Hira, the founder of Solar Healing centers teaches about sun gazing and it’s benefits.

I am interested in using sun gazing as a natural way to improve and prolong my life. I’ve been using earthing for pain relief (long distance walking injuries) and increased energy with great effect, so why not try sun gazing?

Some of the benefits of sun gazing according to this revolutionary man include:

It is reported that HRM went through three clinical studies to prove his point about reduced hunger as a result of sun gazing to the medical world.

“The first studied fast went on for 211 days in 1995 and 1996 in India. Dr. C.K. Ramachandran, a medical expert on Ayurveda medicine, directed this study. The second fast took place right after that and lasted an impressive 411 days! Yes, that is over one year with no food; it sort of takes what we thought we knew about the human body and throws it out the window! This study also took place in India and was directed by an international team of 21 doctors and scientists; Dr. Sudhir Shah led it. The third observed fast took place in the United States at Thomas Jefferson University and the University of Philadelphia, this study lasted 130 days.” ~ collective-evolution.com

Before you run out and try this it is important that you know of and observe this STRICT rule for sun gazing: practice only either during the first hour of the sunrise, or the last hour before the sun sets for short amounts of time as directed in the HRM sun gazing method. Damage to the retina from UV rays will occur of this is not observed.

“Begin by spending a maximum of 10 seconds on the first day by looking directly at the sun during the safe hours.

It is an important part of the practice that you stand barefoot on bare earth. This helps to keep you grounded and enhances the benefits of sun gazing.

As you are staring at the sun visualize the energy from the sun coming into your body and filling your body and cells with rejuvenating light.

On the second day aim for 20 seconds, each day after that continue adding 10 seconds to the previous day. So at 10 days you will be looking at the sun for 100 seconds, or 1 minute and 40 seconds.

Continue this daily until you have reached 44 minutes. This should take between 9-10 months depending on the weather.

After this you will need to walk for 45 minutes each day for the 6 days following the completion of the 9-10 months of sun gazing.

After this, walk barefoot on the earth as often as possible, preferably in the sun, as a continued road to health.”  ~ collective-evolution.com

I have not done the whole 9 month program as yet, but do practice sun gazing as much as possible and of course earth daily.

In the limited amount of sun gazing that I have done I have benefited from an amazing feeling of peace, much like through meditation. It is almost trance invoking.

I am able to process anxiety and stressful situations with a deeper calm; social interaction used to be quote painful for me. I feel in touch with the heart of Earth like never before. My connection to my yoga practice is intensified. I dream more vividly and my intuition is much sharper.

It truly is quite transformational and I look forward to the longer practice.

It is also lovely to do sun salutations after sun gazing, in effect, a symbol of gratitude to this generous heavenly body.

My goal is to begin the 9 month practice after my move to the coast of British Columbia next year to harness the power of the ocean, the earth and the sun all at once.

The people that I have spoken to who participate in sun gazing rave most about their increased level of health and a decrease in food consumption.

The sun is a powerhouse of potential!

I’ve always used the sun as a way to heal, and sun gazing is a continuation of this practice. Sunbathing for me, or, exposing my whole body to the healing rays of the sun for production of “Vitamin” D (it’s actually a hormone), has been a lifelong habit.

I do this responsibly of course—no burning.

We are creatures of the natural world and we all need the sun, although with plentiful skin cancer scares, many people have stayed away from the sun altogether. But I think the pendulum tends to swing drastically before we find a balance of what is good for us.

As my mind explores the possibilities, I wonder about the application of sun gazing in times of famine, and how this is a unique way to use the sun for energy production.

Perhaps HRM is truly onto something world-changing!

I’m finding that the three habits of yoga, earthing and sun gazing are bringing me closer to center. They are very complimentary practices, in fact, as all of them acknowledge our inherent natures as spiritual beings having a physical experience.

A resource to find out more about sun gazing is the documentary Eat The Sun, by Peter Sorcher, one man’s journey into sun gazing. Eat The Sun