The Night I Made Love with an Island. 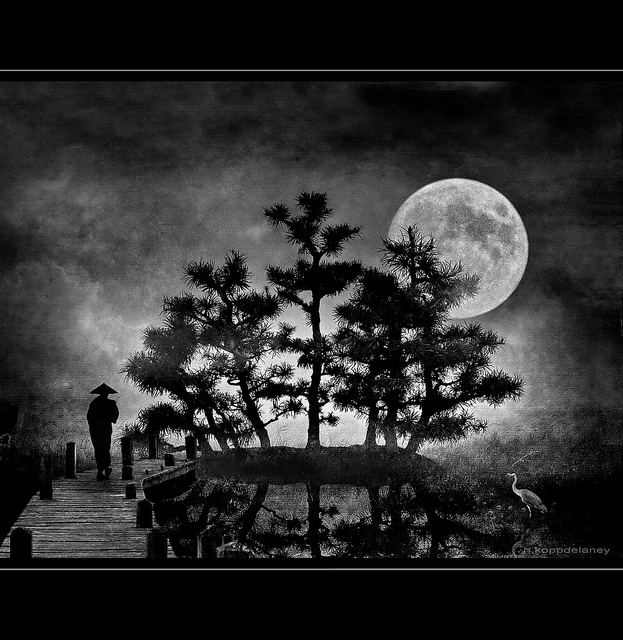 One evening of August, I was walking on a beach on the tropical island of Ko Pha Ngan in Thailand. It was dark already, and I was trying to find a bonfire where a few friends of mine were supposed to be gathered for a goodbye party. My plan was to hang out with them for a bit, then go home and put an end to a very satisfying, intense and tiring day. But things were meant to go in a different way that night. I didn’t know it yet, but I was going to meet a powerful entity.

Walking in the dark towards the fire, which I could already see in the distance, my mind was busy with all kinds of thoughts. I was thinking about the lecture I had just given (I was working as a yoga teacher at the time), the things that went well and those that could be improved, and a few other apparently unrelated topics.

At some point, almost by chance, I raised my eyes and saw the night sky above me. It was full of shining stars, silent and immense, pulsating ever so slightly with the tremendous force of existence.

All of a sudden, I realized how ridiculous I was, walking with my head bent and a hunched back, completely oblivious to the magnificence above me, lost in a whirlwind of words and concepts. I stopped and burst into laughter. And then… the spell was broken.

The chattering inside my head subsided; the majestic silence of the night sky, the soothing sound of the waves, the enticing calls of one thousand little animals in the jungle, finally found their way through my unclogged mind and into my core.

I felt like I had been shaken out of a hypnotic dream, and I was finally awake—present for once, attentive and aware of the beauty that surrounded me.

In this state I continued my walk, and by the time I got to the fireplace, I discovered that the fire was still burning, the embers were glowing red, but there was no one in sight. I walked back some meters, and sat on the beach in the darkness, looking at the stars above me, enjoying this rare, blissful moment of presence.

I turned my head to the right. The view was charming: the shoreline went on an on, and, in the distance, there was a promontory covered by black vegetation and dotted with sparse lights. And then, right behind the hill, a speckle of light ascended into the night sky, leaving a blazing trail… and it burst in a gigantic flower of pure colors and geometric shapes. Another, and then yet another flower exploded in the sky, each one with a diverse and unique shape, all of them lasting just for a few moments and then withering in the blackness.

It was almost too much, and I started giggling like a child, while tears of joy slowly crossed my cheeks; then, as quickly as it had begun, the exhibition stopped.

Suddenly, I noticed a peculiar energy all around me: it was gentle, but lively and playful. It seemed to have its own intelligence and personality. It was, above anything else, distinctly feminine. I realized that this presence was coming to me from the ground I was sitting on, but also from the whole mass of land around me. It was the island itself!

The feminine energy surrounding me was completely different from my own energy. If mine was hot, vibrating quickly, hers was cool and slow; if mine was angular and pointed, hers was round and wavy. Our energy fields started playing with each other in a dance of pushes and pulls, just like the bodies of two lovers. I became aware of some pleasant vibrations in my body, particularly but not only around my pelvis and genitals. We were making love.

I was so enthralled by the experience that, without even noticing, I began moving my own energy faster and faster. I promptly perceived a response: I was going too quickly! My “partner” was asking me to slow down, and to maintain my attention open and spacious, instead of rushing towards a goal.

I slowed down my rhythm, but I became so absorbed in trying to understand what had just happened, that for a while I forgot completely to be alert and enjoy the dance. Once again the island called me back to the present moment, gently but firmly.

I couldn’t help laughing at myself. What a lousy lover I was! First rushing things up, then getting lost in my own train of thoughts. So much for all the years of Tantric practices and studies! Apparently, that night I had to learn it all again. I felt humbled and grateful.

As beautiful as this experience was, it didn’t last long. After a little while I realized that I needed to go home and rest: it had been enough for that night. I felt a bit guilty, like a lover who rushes away after a short and possibly unfulfilling encounter.

The feminine energy instantly read my thoughts and, without using any words, replied: “What do you mean you’re going away now, you silly sweet baby? Don’t you realize that when you go to bed, you will be just resting your head on a different part of my body? So don’t be ridiculous and go, I will be cuddling you to sleep and we have a lot more time to spend together.”

Thus, I left the beach with the warm afterglow of someone who comes from a new lover’s bed. I felt I had been blessed by the possibility of experiencing yet another manifestation of the Feminine, with its glorious diversity of shapes. And I had made a new friend! A very big one indeed, and challenging in many aspects, but also one who had shown me so much love and compassion.

I realized that, as long as I was on this island, she would always be there.

This felt like the beginning of a beautiful relationship.