How I Learned to be a Happy Empath. 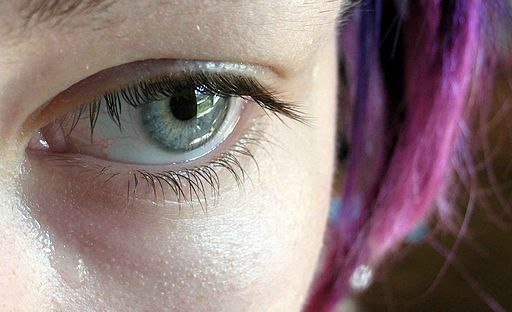 “If you feel sadness, then you’re sad, right? Yet, as an empath, feeling sadness does not necessarily mean being sad. Rather, you could be feeling the sadness of someone else.” ~ Caroline Van Kimmonade

It was about 20 years ago. I was curled up on my bed clutching one of my yoga pillows, sobbing.

The woman I was living with saw me there on the bed and came into the room.

“Are you all right?”

“Did the nursing home call? Has something happened to her?”

No. The nursing home hadn’t called. Nothing had happened. I had just felt a cave open up inside me and falling into that dark, lonely cave had brought on wracking sobs.

My friend walked over to the bed and put her hand on my back. “Honey,” she said softly, trying not to hurt me further, “This has happened to you before. This crying doesn’t sound like it’s you crying. It sounds strange, like it’s really your mother’s tears you’re shedding, not your own.”

I looked up at her—-she was blurry and distant, but still there telling me something important.

“Crying your mother’s tears isn’t going to do either one of you any good.”

I could hear her words—even feel their importance dancing around the edges of my understanding—and yet, it sounded to me as if she was speaking in a language I had not yet fully learned.

What was she trying to tell me?

A long 10 years later, after my mother had died and after my father’s recent death had occurred, my new husband and I were returning home from a trip to California.

I was on a winding mountain road driving through the High Sierras, cresting a ridge with an entire valley of hills and mountains stretching before me, when I felt a huge emotional valley of my own open up inside me. Waves of tears and sobs began to wash over me.

I couldn’t see the road and had to pull off into a rest stop.

“What’s the matter? Are you all right?”

My voice was choked and wracked.

“Your father’s dead.” My husband said matter-of-factly. “That’s for him to be crying about. Not you.”

His words flew at me like cold water. I rolled down the window to take in a breath of air when he reached over and put his hand on mine.

“You’re cryin’ because you’re feeling your father’s feelings,” he said, assuring me that he wasn’t being critical of me. “But you can’t help yourself. You’re an empath. That’s what empaths do.”

An empath? What the hell was an “empath?”

I’d never heard the term or why my husband was applying it to me.

We talked about the whole empath thing off and on all the way home while out the car window I saw slide shows of myself crying over and over again in that familiar confusing and overwhelmed way. I saw myself leaving in the middle of a movie, shaking and convulsed from the violence being depicted. I saw myself shivering with cold hours after I’d seen a homeless person outside in freezing weather.

It was almost laughable that I stopped watching football anymore because I literally couldn’t stand the tension. I even saw once again that moment in which my friend had found me on the bed all those years before when I was crying for my mother.

“Crying other people’s tears doesn’t do you or them any good.”

With my husband’s insight, I felt a strange and enormous validation. Someone had finally put words to how emotionally beleaguered I’d felt so much of my life.

It has been a long time since that eye-opening moment in the High Sierras and after much study, self-observation and practice, I have learned that while “empath” is one of many labels that can be used to describe me. the most important thing is that it doesn’t leave me without choices. I have learned that in fact, I do I have choices about whether to feel the feelings of others or not, whether they be alive or dead, in a movie or real or walking the streets, cold and homeless.

It’s not that I don’t care about people anymore—it’s just that I care without feeling their feelings for them.

My friend and my husband had both said the same thing.

“Feelings other people’s feelings for them doesn’t do either one of you any good.”

What does do good is to exercise my choices and to empower myself to become a “happy empath,” instead of a confused and overwhelmed one.

“Being a happy empath is a little like playing soccer and keeping balls out of your team’s goal. You still perceive those balls, but you kick them away before they enter the goal. Obviously, if you’ve never played soccer, that task alone can seem daunting. But, as with anything, energy awareness is a practice that can slowly become second nature. In addition, when you start to reprogramme your own beliefs around what you are and aren’t responsible for, then you’ll find that less and less balls come near that goal in the first place.” ~ The Happy Sensitive

The Difference between Two Kinds of Empaths.