Heartbreaking Points to Consider Before Surrendering a Dog to a Shelter. 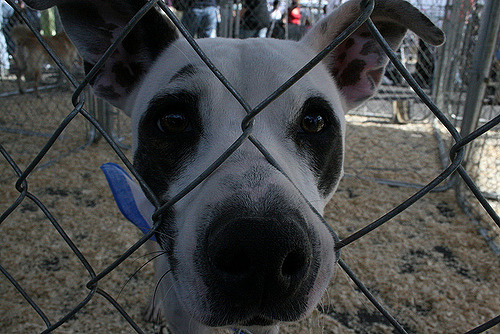 After reading a Facebook post written by a director of a dog shelter, I felt compelled to share some of the points that were made, so that they can be considered by anyone who is thinking about getting a pet, or who has one but is uncertain about their future.

The post was entitled, “You can’t keep your pet? Really?” It gives a little insight from an “inside view” into some of the realities that go on behind the scenes in dog shelters.

The note starts off by saying that anyone who surrenders a pet should first be made to work for a day in the “back” of the shelter where you would witness the “life drain from the sad, lost, confused eyes.”

Statistically, 2.4 million homeless puppies and dogs are euthanized every year in the U.S., mostly due to overcrowding in the shelter.

Ninety percent of the dogs that enter shelters will never walk out of them, regardless of their breed. From time of arrival many shelters give the dogs just 72 hours for a new family to come forward.

Unfortunately these two to three days are often when the dog is at its most anxious and stressed state due to the bewildering, unfamiliar and extremely noisy environment they have been dumped in. The people that come to look around the shelters often don’t understand the emotional and mental turmoil the dog is in and they may judge the dog purely on first impression, which is likely not to be a true reflection of the overall nature of the dog.

The dog may be labeled “unadoptable” simply due to their uncontrollable shaking, whining, lying in their own urine or feces in the kennel or frantically jumping up at the wire cage as a desperate cry for attention. Or, the petrified dog may be suffering so incredibly that it turns away and blankly stares at a back wall as an attempt to “disappear” as they have literally given up all hope of receiving love or affection.

Considering that all dogs want to do is offer unconditional love, companionship and protection, it is very difficult to grasp that this is how so many of them spend their final days.

In some shelters the dogs have a longer period before being euthanized, although, they are then susceptible to picking up infections or becoming further traumatized due to the dire conditions they are forced to exist in. In most shelters the dog will have just one small space where it will eat and sleep and they often release their bowels in their living space when they are severely distressed. It may be some time before the kennel is then hosed down with chemicals and cold water.

Sadly, certain colored dogs often have their fate determined as soon as they walk through the doors. Black dogs are almost guaranteed to be put to sleep as there are so many of them, with a high percentage of the misunderstood breeds such as pit bulls, rotweillers, and mastiffs facing certain death.

A little bit of highly uncomfortable to read information about euthanasia, from the original Facebook post states that the dog will be forcefully handled on a catchpole, which unfortunately can make the terrified dog aggressive causing them to bite the pole. This can cause their jaws to rip and bleed and break teeth.

Some dogs will seem happy to see the pole, believing they are going out for a long walk, not realizing they are walking their final steps.

Every single dog, when reaching “The Room” where euthanasia takes places senses what is about to happen next. According to the note, they will:

“freak out and put on the brakes when they get to the door. They shut down, they are petrified, and desperate to live! (Like they trusted someone to walk them and feel betrayed that the person is killing them instead! This goes against their social nature! It breaks their spirit—like it wasn’t broken enough already by being betrayed by the people who dumped them here…).

The dog will be restrained and then a shelter worker (“often untrained and not a vet”) injects a lethal dose into a vein in their front leg. This can be a painful procedure as it is difficult to find a vein on a petrified panicking dog. They will then lie there alone, sometimes for hours, shaking in shock, gasping for breath, defecating on themselves and dying in agony.

Some shelters use a heart stick (illegal in many states as it is so barbaric) to inject directly into the heart, which is not always carried out with sedation. Other shelters use gassing, where frightened, howling dogs are crowded into ovens as this saves time and money.

The Facebook note explains what happens in the gas chambers: “The dogs will paw, scratch, bite, panic and are desperate to breathe and live. Big dogs are often still alive at the end of the horror and have to go through it a second time.”

There are reputable shelters that are humane and hire a licensed vet for the procedure, so the dog is sedated and then euthanized, however, not all shelters have the spare funds for this and it costs a lot more money.

The dog’s corpse will then be stacked in a large freezer at the back of the building along with the many other dogs that have been killed until they are “picked up like garbage.”

The post finishes with the Director confessing, “I deal with this everyday. I hate my job, I hate that it exists and I hate that it will always be there…unless you people make changes and start educating yourselves, your children, the public! Do the research, do your homework, and know exactly what you are getting into before getting a pet!”

Before thinking about taking a dog to a shelter consider all options.

It is possible for the dog to go through obedience training, or another option, although it doesn’t work in every case, is medication that could help with health, fear or anger problems.

If the dog is very aggressive, old or sick and euthanizing is the only option, make an appointment with a vet so that it experiences a humane end to its life in the company of someone it loves, rather than leaving it in the hands of a shelter.

If keeping the dog is causing difficulties it is recommend to check with family members, friends, co-workers or even neighbors that may be able to offer help and support. Alternatively, advertise the dog on a reputable site and always, always check the home it is going to thoroughly. People who are involved in dog fighting scour free-ad sites for dogs that can be used as bait, so please, always bear this in mind.

Dogs trust us, they are voiceless, dependent and they would devote their lives to humans. The very least we can do for them is to consider theirs when the companionship is reaching its end.

Many shelters and rescue centers are reputable and have caring staff doing their very best. It must be heartbreaking for the staff to have to watch the dog’s spirits relentlessly crushed day after day. However, many are totally overwhelmed and struggling with resources.

There are also no-kill centers although many are regularly full and have strict guidelines regarding what dogs they are able to accept. For example, some only accept owner-surrendered animals or breeds in high demand that have a chance of being fostered easily or re-homed.

All the above applies for cats and other pets too. Although we don’t always know what is going to happen in the future, how circumstances will change or what is the best decision for the pet at the time, one thing we do know is that pets trust us—their lives are literally in our hands and we have to do whatever we can to protect it and look out for their welfare. Pets are vulnerable and have an array of emotions. They feel love, fear, pain and abandonment similarly to how we feel.

Animals deserve a life free of suffering. They cannot choose. We choose for them.

Sadly, millions of them are let down every year.