Why we Need to Get Better at Failing. 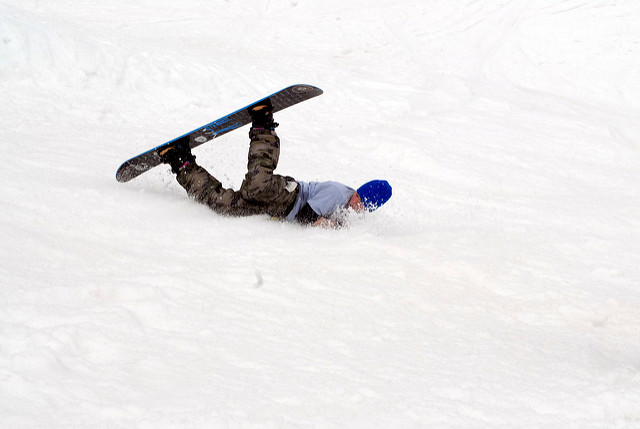 The glory of achievement, of talent, of success, like conquering a sport, a hobby, an art—possessing any form of talent is deemed highly sublime, extraordinary.

The in-between of novice and expert, frankly, really sucks.

It’s ignored and forgotten, as if this grueling part isn’t part of the process.

I’ve often avoided attempting things that might make me look stupid, ineloquent. The fear of looking “bad” often stops me from attempting anything at all.

We strive to be great in private, only taking our talents to the stage after the tears, the torment, the growth, the nitty-gritty.

I used to hate snowboarding. Loathing doesn’t come close to the consequential disdain I expressed to others when I discussed the terrors of embarking downhill, down mountain. I used to belittle the stupid sport, “Why would I want to travel at an incredibly fast rate down a steep mountain strapped to a thin piece of plastic?”

I didn’t hate the sport, I hated the fact that I was terrible at achieving what I perceived success should be.

I was scared of failing.

People I met had, more often than not, been skiing or snowboarding since their young years. It’s interesting how children are expected to “be bad” at something. It’s accepted, and, therefore, for them, success can be achieved. Then, we hit this point in our teenage years or our adulthood—an age where we fear failing at something, and we cease to try something new.

Why would I start my drive to dance, to snowboard, to sing, to paint after my 20s?

It’s too late, we claim.

It’s not too late.

We just don’t want to let ourselves suck at anything.

And we don’t let our fellow grown-ups suck at anything either.

I have lived in the mountain town of Breckenridge, Colorado for over two years. When I moved here, I had little idea that it was a ski town. I had snowboarded only four times in my whole life, on the small garbage dumps of Michigan, accompanied by youth, whiskey and the wonderful label of beginner. Despite living in a town where the mountain is easily accessible to me, I avoided snowboarding like the plague, not because I didn’t have fun. I was embarrassed, because, I wasn’t any good.

In fact, I was terrible. Friends who I used to ride with and who were more capable had little patience for me. They would offer their critiques: “You really need to try getting on your toe edge,” or “You’re doing this wrong.”

No one just let me be exactly where I was. No one just laughed, and let me suck. Not even me.

I had a girlfriend invite me to go snowboarding with a couple of our friends. We had just met, so, she had little knowledge of my incredibly novice skills.

Morning beckoned and I readied for the day to meet my friends. As I hiked my snow-pants up, I muttered, “This is so stupid. I don’t want to go. Snowboarding is so f*cking stupid.”

“I’m scared!” I confessed. “I’m scared of sucking and making a complete and total ass of myself. I don’t want them to think I’m stupid.”

His eyes fluttered in laughter, but his face betrayed no other thoughts about my simple, blunt answer.

“Then suck. It’s all about having fun, so, just have fun. You don’t have to be the best. You can be the slowest. It’s okay if you’re the worst. No one is there worrying about how you’re doing, they are watching their own progress.”

Why have I never allowed myself to simply be a beginner? I’ve always had the annoying habit of picking things up quickly. I’ve never had to struggle through the falls, the short-fuse, and the rush in small progress of being a beginner at something.

When do we become consumed by the fear of falling, of failing?

When do we lose the rush of just trying something new?

I went that day, and my friends didn’t care that I almost fell off the mountain. That I unstrapped and lost my board. They laughed with me, and helped me back. “Never unstrap” became our hilarious mantra for the day.

If they were aggravated, they didn’t show it.

They complimented me on trying, on continuing when some people would quit. Their confidence in me allowed me to push myself to a new level. They didn’t care that I was the slowest one.

I realized that day, the greatest gift we could ever give someone is to allow them to be exactly as they are.

Believe that they can do better, but accept them exactly as they show up that day. That’s the greatest richness we could ever possess.

And the greatest freedom?

Allow yourself to suck.

We all want to be poets, artists, acrobats, dancers, skiers, snowboarders, basketball players, writers, creators. We all are artists or dancers in some way. Some dance on stage, some on snow. Some find poetry through movement, and others through words.

We hinder our own expression with our self-doubt, hell, sometimes self-loathing.

Why, in this culture, are we trained to hate ourselves so?

We all feel inadequate, so let’s just let inadequate be okay.

We can’t be talented without struggling first. We can’t walk without first stumbling.

We can’t create a masterpiece without painting something bizarre, and we don’t realize that some colors clash without first banging them together. We can’t learn to slide smoothly down a mountain on a thin piece of plastic without falling hard, multiple times.

Let yourself f*cking suck. Be totally terrible at something. At the end of the day, the only person judging you is you. Have fun falling and getting back up. Have a light-hearted attitude about looking silly or failing.

Because in discovering aspects that don’t work, you find those that succeed.

We expect instant success in an instant kind of world, but never trying is the ultimate failure—it is the one path that will never drive us toward success.

Think of that one thing that you are scared to try, and invite yourself into the journey of being terrible at it.