The Coming Genocide in Syria. 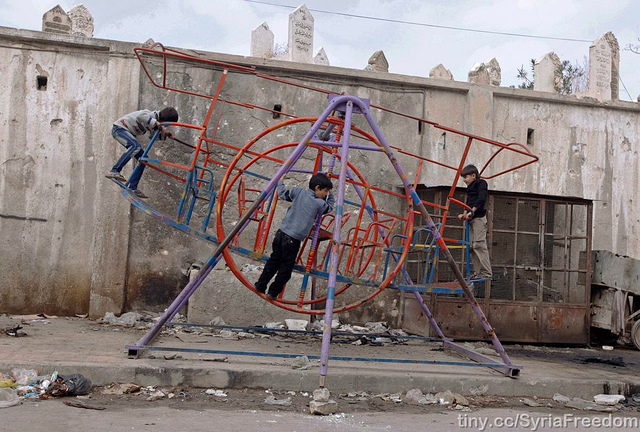 It was a reaction to the early protests, when the people forecasted the fall of the regime, before the regime threatened back the devastation of its people. Sometimes we let go gracefully, welcoming the unknown; sometimes we hold on so fiercely the intensity of attachment blazes the world to ash. In the end, Syria may get both Assad and the country he has burnt to the ground. But everything might have turned out differently.

The above words were first written from close to the Syrian border, in the Turkish city of Antakya, in the region of Hatay, where a Russian jet was shot down the day after my arrival. Antakya is an ancient town of winding streets, whose past glory can be descried in the managed decay of ancient walls and archways. Muslims, Christians, Alawites, and Armenians all live there in seeming harmony, a model of what Syria might have been. At the time of my writing, another world still seemed faintly possible. Now all of that is gone.

The last remnants of democratic resistance are fast crumbling in another ancient city, this time in Syria, where the otherworldly Aleppo is being burnt to the ground. Russian cluster-bombs are targeting the hospitals and schools of this besieged and starving city, as a ghoulish band of conquerors press in from every side. The Islamic State, Hezbollah, the Kurds, Assad, and Iran each press forward to claim their fill. And somehow, dreamers-who-believe-themselves-realists think it the closing act of this passion play. Never trust the future to those who blind themselves to the present.

If Assad remains, little Napoleons will fight over the spoils. Resistance will go underground, jihadists turn to terrorism, Sunni fighters stream in from the Gulf. And the regime will almost certainly liquidate the rebel-opposition. This crackdown will involve mass imprisonment, and the regime that has already tortured to death at least 10,000, and probably tens-of-thousands more, the regime the United Nations has just accused of practicing extermination of its mass-incarcerated, will likely step-up operations of its prison-mortuaries.

Assad will see this as necessary to maintain rule, and the world will likely turn away, imagining the war is over. World leaders may watch in horror, and follow through with sanctions. Yet, the sanctions will make rebuilding the country virtually impossible. The economy will remain fissiparous; the stresses will exacerbate symptoms of collective-trauma, fracturing society into ever-more tightly-knit, ethnic enclaves. The bulk of migrants will not go home, as many more continue to stream out; Europe will feel the strain, and the flames of fascism there will burn the brighter. This epic-tragedy is not some play that will close with the death of its democratic protagonists.

If Assad remains, tyranny will reign, not just in Syria but also in the international domain. The dictator Putin, has already committed genocide in Chechnya and dismembered Georgia and Ukraine. His opposition has been imprisoned and assassinated. Yet, victory will put wind in his sails, dampening the blow of sanctions. And as the world turns away from an impending genocide of Syrian rebels, reactionaries will assail us from the Left and Right with tales of his unrivaled glory. Never trust the panegyrics of the passive consumers of state propaganda.

If Assad remains, it will be a victory for international anarchy. Democrats the world over will feel a cold-wind bite, human rights advocates will sense their power waning. Sunnis and Shias will fight over the remains of a Middle-East dismembered, and the jeering bluster of anti-Western tyrants will rise to a chorus. If Assad remains, after staggering on the ropes for so many years, following the invasion of Iraq, freedom itself may suffer a knock-out blow.

Watching the slow-motion collapse of a country is reminiscent of the impermanence of all things. Much like the individuals of which they are comprised, states are fragile and can easily be shattered beyond repair. Antakya was a once great city of ancient Rome, but it lay at the hinge-point of several natural empires, the Persians, Greeks, Romans, and Ottomans. And the ravages of war eventually aged it into a forgotten backwater.

Something like the opposite is now taking place in next-door Syria. When its collapse seemed important only to Syrians, it concerned us little, but now our attention is riveted, as it has come to represent a much deeper civilizational decline. Syria has become a palimpsest of what might become of human civilization itself. Syria foreshadows a sort of civilizational apocalypse in which every backstop fails and the patient-world collapses.

Syria is an inferno stoked of Western hypocrisy, Iranian cynicism, tyrannical psychopathy, and global ignorance. It is an abyss into which we all sometimes worry the world itself might someday slip. It is a wonder the way we sit watching: it can sometimes seem as if we are blind to the possibility of collapse. Never trust the worst is over; Syria is not some child’s play but rather an epic-tragedy, and the worst may be yet to come.