The Revolution Will Not Be Theorized: A Response to Sanders’ critics from the Left. 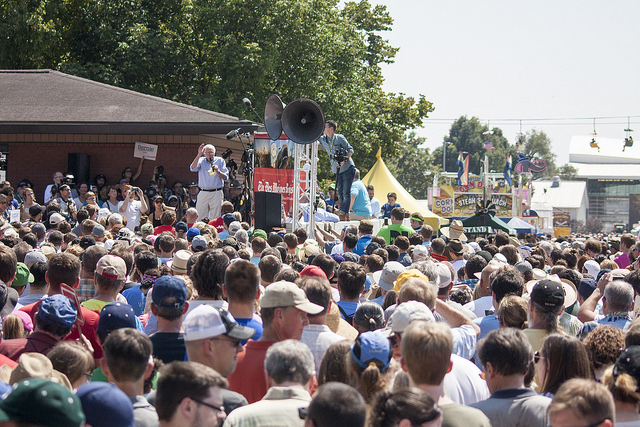 The Revolution Will Not Be Theorized.

There are two debates currently raging around the Sanders campaign. The first comes from Liberal Media-following Leftists to Sanders’ Right, who say he’s unelectable, that his policies won’t work or will never get passed, and that we must support Hillary against a Republican party gone mad.

The second comes from Sanders’ Left, from traditional radicals who say that Sanders is himself a part of the establishment and supporting him is a waste of energy that could be directed toward building a radical movement. While winning the first debate is what will get Sanders elected, winning the second debate is critical to keeping the real movement for change together at a time when maximum focus and effectiveness are needed. This second position is clearly expressed in Chris Hedges’ new piece, “Bernie Sanders’ Phantom Movement,” and I will attempt to answer it here and explain why, despite my agreement with almost every word Hedges says, I still believe the Sanders campaign is the best vehicle we have to grow the true revolution over the next nine months.

I utterly subscribe to Hedges’ analysis of where we are in this country—in fact, my thinking on the subject has been very largely shaped by him. Yes, there’s been a “corporate coup d’état.” Yes, the DNC (Democratic National Committee) is “a full partner in the corporate state” that has “no interest in genuine reform.” Yes, their “response to any internal insurgency is to crush it, co-opt it and rewrite the rules to make a future insurgency impossible” (as we could feel in the mainstream calls for Occupy to make specific demands and field candidates—the better to eat you with, my Dear). Yes, we must “destroy … the corporate establishment, including the Democratic Party.” Where I differ with him, and with the radical critique of Sanders more generally, however, is on the significance of this campaign and on what we can realistically expect from any election in terms of effecting real systemic change.

Raising political consciousness is not in itself Revolution, but it is not trivial. There are things that, once seen, cannot be unseen. The millions who are responding to Sanders’ message will not simply forget in November that their economy and politics are rigged by multinational banks and corporations. Many disillusioned Obama supporters later swelled the ranks of Occupy, moving in less than three years from star-struck focus on a leader to a “movement without leaders.” In other words, they learned from their experience and evolved.

Yes, Sanders is a supporter of Empire (and Israel), especially when compared with a Jill Stein or a Ron Paul. Maybe he did make a “Faustian deal,” so as not to become another Nader. But it’s also true that no Nader and no Stein has been able to carry this message—ultimately the Occupy message and the Hedges message—to the core of the national political debate in an election year and threatens to make it the issue of this campaign. Empire can only be stopped when it is “impossible to profit from war,” just as mass incarceration can only be stopped when it is impossible to profit from prisons. And Sanders’ message englobes this point, whether or not his own actions have supported it. Getting money out politics is the closest thing we have to a magic bullet or a single strike at the Death Star.

To focus on Sanders’ personal shortcomings is to miss the point. He is not a hero; he is the Ringbearer. Despite his imperfections and whatever we may think of him, he has been chosen by circumstance to carry the torch of Revolution at this moment. Our faith should not be not in him, but in the millions who are responding to his message, mobilizing and spreading awareness on issues that any true systemic change must be based on. The next time a street vendor kills himself, or the government plans to build a shopping mall in a park, or 160 people carry sleeping bags to a square, they will be there.

The Sanders campaign does not need to become a movement or a revolution because it already is. Ultimately, it is but the latest expression of a broad popular sentiment that began in the anti-war demonstrations of 2002, regrouped around an improbable candidacy in 2008, and graduated to a more elaborated critique and more confrontational tactics in 2011. In 2016 we see it reengaging with the formal political process as in 2008—but with the message of 2011. This is the nature of the true movement: nameless, faceless, leaderless, protean.

Furthermore, only such a movement—that can battle in the Convention Hall one day and in the streets the next—will be able survive the sophisticated tactics that will be deployed to destroy it. We need a sustained struggle on multiple fronts, taking multiple forms, and the struggle being waged within the Democratic Party right now is as valid a front as any other. This is not a reclaiming of the Democratic Party, but an unmasking of it. The “duplicitous game being played by the political elites” is being publicly exposed and people are getting it. The moment Sanders tells us to fall in line behind Hillary is a moment we must shift en masse to Stein or some similar Plan B.

My plea to Chris Hedges, and to all our allies on the Revolutionary Left, is not to sit out this opportunity to give hell to the DNC, raise awareness and mobilize against the Corporate State on an unprecedented scale, potentially to break the Democratic Party by staging a mass exodus upon his eventual loss (even if that means a Trump victory)—and yes, to let hope turn into disillusion, knowing that that this disillusion itself may be the fertile ground from which yet more powerful resistance can spring. The alternative is what we see far too often: a Left that is “internally crippled by endemic factionalism and dysfunction…dominated by an older, white demographic…and narcissistically self-referential.”

The real movement is a phantom movement: it appears, strikes and dissolves, only to reappear again elsewhere in a new and unexpected form. We do not decide where or how will erupt next. All we can do is recognize it and meet it where it is. When a thousand people are camping in the park, you grab a sleeping bag. When they collapse 50-point margins to tie or win primaries, you donate $27 and hit the phone lines.