The Rise of the Global Grassroots. 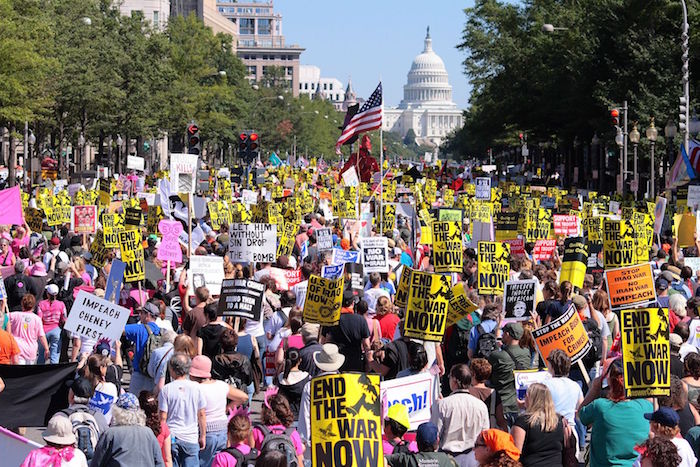 In the weeks before the Iraq invasion, I was in Brazil. Every night the evening news would open with a panorama of the protests taking place around the world—Istanbul, Amsterdam, Buenos Aires, Paris, Tokyo, Montreal…

There was an energy, a vastness and a unity unlike anything I’d ever seen. Tens of millions of people of all ages, social classes, religions and political persuasions, turned out in scores of countries on all continents (yes, there was even a protest in Antarctica), with a single simple message to the U.S. an its allies to not invade a sovereign nation.

An estimated 3,000 protests were held between January and April 2003 by some 35.5 million protesters. February 15th, 2003 is believed to have been the largest demonstration in history, with millions of people in at least 600 cities, including an estimated three million in Rome, and up to a million in London and Barcelona respectively, coming out on the streets against the impending attack. Yet when I read the New York Times and Washington Post, I found barely a word on this unprecedented global phenomenon, and certainly no sense of its vastness and intensity.

We did not have long to wait, of course, for the answer to these historic protests, the UN experts pleading for more time, and the Iraqi government’s repeated assurances that it had no weapons of mass destruction. The U.S. and a handful of allies went forward with their invasion on March 18th and more than 14 years, four trillion dollars and a million lives later, we are living the consequences we sought to avoid then.

The people of the world joined together again in 2008, this time in support of a political candidate who represented a return of the world’s biggest power to the table of nations. I was in many countries during the election, from Haiti to Ghana to Argentina to France, and the sense of hope and excitement was palpable. After the trauma of the Bush years, people needed a place for their hope, and Barack Obama channeled that brilliantly. He was the world’s candidate and his election was like every country gaining the World Cup. In this sense, one can understand the decision to award him the Nobel Peace Prize—through his candidacy he had galvanized and focused the great global desire for peace in a way virtually no individual ever had.

Fast forward to 2011, the fall of the Tunisian government and the flight of its President a mere three weeks after the self-immolation of street-seller Mohamed Bouazizi in protest to his harassment, abuse and humiliation by a policewoman. The flame Bouazizi lit raged across the globe for three years, as country after country convulsed in mass popular street protests against their own localized manifestations of Global Empire. Most of these movements ended in some form of defeat, whether through coöptation and a slow return of the former order, as in Tunisia; a violent retaking of power by the entrenched elite, as in Egypt; ruthless crushing with foreign and media collusion, as in Bahrain; a slide into total chaos, as in Libya and Syria; or stillbirth, as in Saudi Arabia. In most countries, the critical mass for revolution was not reached, and the movement broke like a wave, cresting more or less, then getting sucked back into the sea of the prevailing order.

Occupy was one of these movements—spreading almost instantly to nearly 1,000 sister occupations, only to be smashed in a mere two months by the dual forces of corporate media propaganda and militarized police. The quelling of Occupy included illegal national coordination by DHS of numerous local police departments that rooted out every single encampment in less than two weeks. In Lower Manhattan, the original occupation was attacked with tactics ranging from an attempt to empty the camp for cleaning as an alleged “health hazard” (in response, we staged an all-night cleaning drive and held the police off, with thousands of reinforcements arriving at dawn until the City finally backed down) to a direct violation by the Mayor and Chief of Police of a Court Restraining Order against them for more than eight hours until they managed to get a different ruling from another judge. The destruction of the occupation itself involved a major police operation at about 1:30 AM, while most of the protesters were asleep, their violent eviction and wanton destruction of property, including the 5,000-book free library which was thrown into the trash. From Brazil to Turkey to Quebec to Spain, similar scenes played out along a scale of repression.

Yet through it all, this decade or so of history traces a significant historical process: the emergence of a global people’s movement—what I call the “Global Grassroots.” The protests of 2002-2003 were different from anything that preceded them. Unlike the earlier “Anti-Globalization” movement, they could not be dismissed as “fringe.” They were more like King’s March on Washington. And, while Occupy was similarly dismissed with partial success (though one could easily find senior citizens, baby carriages and men in suits in the marches), most of the post-Bouazizi protests were far to broad for that. Support for Obama in 2008—at least virtually everywhere outside the U.S.—was very clearly an across-the-board phenomenon.

Universality, inclusion and principles-based thinking (e.g., killing people is not a path to “peace”) are the clear and simple values of the Global Grassroots. It is a movement of people who just want a fairer, safer world for themselves and their children, who distrust politics and dogmatic religion, who belief in human equality and respect diversity. When the people in Tahrir chanted “we are all Egyptians,” it was not a statement of division but of unity. It wasn’t meant in an exclusionist, nationalistic sense (as if they Egyptians as opposed to other people), but in an inclusive sense, as in “Christians and Muslims, men and women, rich and poor, we are all Egyptians.” Each country must grapple with its own manifestation of Empire. Like the proverbial tale of the four wise men and the elephant, one group is confronted with a tail, another with a foot, another with a trunk. The various local manifestations of this global movement are further linked in very concrete ways. Movements are often in contact with one another and learn from one another’s innovations and experiences. Thus roles and immediate goals may differ, depending on where one is in the system, but ultimately the struggle is one.

There are only two sides that truly matter in the struggle for power in the world today: that of concentrated Power and that of the People. The elite has managed to globalize their own power while localizing the power of the people. In order to reverse that we first have to dissolve the illusion of separateness on which their power resides. In a world twisted by the growth of power on a scale never before seen in human history, the Global Grassroots that is spontaneously emerging out of the cracks of a deeply destructive system alone holds the potential to help us reassert our basic human values and stop the madness before it’s too late.