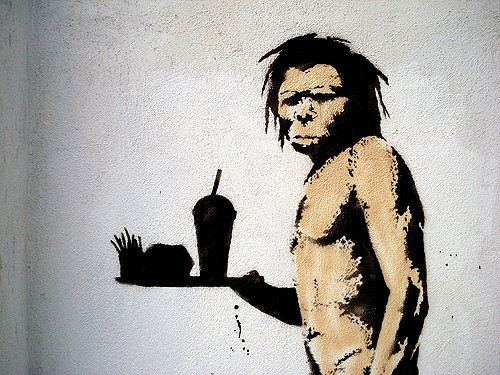 Greetings fellow cave-dwellers! I’m writing you today from the warmth and safety of my cavern (now with wifi) about an important contemporary topic: eating paleo.

Many people have found this does wonders for their health, even leading to easy weight loss. But here are 12 things I virtually never hear paleo advocates talk about:

1. Many people are allergic to eggs. Virtually all paleo breakfast recipes involve eggs (and often bacon), but eggs are a common food allergen. Paleo folks talk frequently about probably unimportant anti-nutrients like phytates and other allergens like gluten and dairy, but frequently neglect egg allergies.

2. Phytic acid helps prevent chronic disease and detoxify heavy metals. Yes phytates prevent absorption of minerals in the digestive system, but they also are key players in the prevention of chronic diseases. Phytic acid binds to heavy metals, helping “detoxify” them from the body. And vegetables also contain these phytates, so you aren’t avoiding them by eating paleo. Non-Western diets—the kind we idolize—actually have the highest concentrations of phytic acid. The whole anti-nutrient thing has been wildly blown out of proportion—whether something is good or bad is a matter of context, and for most people “anti-nutrients” are a non-issue.

3. Caffeine can hurt digestion. Many paleo or paleo-esque diets encourage the drinking of coffee and green tea (possibly with enormous quantities of butter), while simultaneously preaching how their diet will heal your leaky gut and other digestive difficulties. Coffee-drinkers may live longer, but caffeine contributes to diarrhea and gut inflammation, hence why coffee gives many people “the runs.” Paleo advocates are eager to give up white flour and white sugar, but few loudly advocate for giving up their addictive morning fix. I’m not saying you have to, but it’s worth thinking about if you have digestive problems.

4. Burned/blackened meat is a carcinogen. For all the emphasis on choosing grass-fed and organic to avoid potential carcinogens, I rarely hear any mention of the problem of eating meat that is blackened, grilled, or otherwise burned. Hamburgers? Bacon? Sausages? Get outta here. An anti-cancer diet has no place for these foods, except as a rare treat. At the very least, paleo advocates should be talking more about how to cook meat in a way that reduces cancer risk.

5. Alcohol is a carcinogen and a neurotoxin. Paleo people frequently talk about sugar being terribly harmful, but rarely do I hear anything about the importance of sobriety in preventing health problems. Any ingestion of alcohol increases cancer risk in a dose-dependent manner. Alcohol also contributes to fatty liver disease and contains no useful nutrients, therefore the ultimate source of empty calories. Alcohol also does damage to the brain, is an addictive drug (especially for the genetically susceptible), and is implicated in 31% of all fatal car accidents. Alcohol also irritates the digestive system. One of the best things you can do for your health after quitting smoking is to abstain from or strongly limit alcohol.

6. You’re fat because you eat and drink too much. Obesity can be explained through the (inaccurate but still works) model of Calories In vs. Calories Out. If you are losing fat on a paleo diet, it’s because you are eating fewer calories than you are burning…the same with every successful diet. You can even lose bodyweight on the McDonald’s diet or the Twinkies diet (not recommended). A paleo diet loaded up with fats from nuts and butter can easily top the scales and lead to fat gain, just as a person can be a junk-food vegan. Health is certainly related to food choices, but body weight is primarily a matter of Total Daily Energy Exchange (TDEE).

7. Paleo dieters eat less fiber than vegans, and far less fiber than contemporary hunter-gatherers. Jeff Leach is a guy who goes and hangs out with the Hadza in Tanzania to study their eating habits and microbiome. Leach found out that his Hadza friends eat tons of fiber. A Hadza kid (under age four) might eat up to 30-150g of fiber a day! This huge amount of fiber is probably essential to a healthy microbiome. Paleo advocates preach that they get lots of fiber from their veggie-filled meals, but evidence from the American Gut Project suggests they get less than vegetarians and much less than vegans, all of which eat less fiber than the Hadza. As Jeff put it, “I’m not saying that a Paleo or Paleo-like diet isn’t healthy or been shown in numerous studies to be metabolically beneficial, I’m just saying the Paleo folks in this data set consume an embarrassing low amount of dietary fiber by USDA and evolutionary standards.”

8. Factory farms hurt the animals (not just the nutritional value of their flesh), and the environment. Paleo promoters will sometimes talk about factory farms, but virtually always this is in the context of what is good for the human, not what is good for the animal. I find this strange, because many paleo folks are also hunters and have a kind of hunter’s “respect” for the animals they kill (whether hunting animals is truly respectful I will leave an open question). I’ve never once seen a picture of battery hens or pig farms on a paleo blog. Would it create too much empathy? Are paleo advocates afraid of becoming vegan? Sometimes paleo advocates will mention environmental harm from factory farms, but usually in passing. The key value in paleo is clearly your individual health, not the well-being of others. This displays an opportunity for greater ethical development.

9. Grass-fed meat often leads to overgrazing and other environmental problems. A single grass-fed cow needs between 1-100 acres of land, depending on the area, to avoid overgrazing. Often this requirement is not met. As Friends and Farms put it, “there is simply not enough grassland available for America’s 100 million head of cattle.” Methane is also an issue, with both grass-fed and grain-fed: “grass-fed cows actually [produce] 40 to 60 percent more methane [than grain-fed].” For all the emphasis on carbon emissions, methane is a far more potent greenhouse gas than carbon, 25 times more potent in fact. Grain-fed beef has many issues as well, but these are well-emphasized by paleo people. The fact is, beef for all is inherently unsustainable, whether grass-fed or grain-fed. Eating much less beef would do the planet a lot more good than choosing between how the cow was raised.

10. Wild fish populations are massively overfished. Paleo advocates recommend that we eat wild-caught salmon and other wild fish, but these fish populations are in danger of collapse due to overfishing. 90% of the world’s fisheries are either fully exploited, over-exploited or have collapsed. If enough people convert to paleo dieting, preferring wild caught fish, overfishing will become an even bigger problem. Fish farms also have many environmental problems, but unless we allow the wild fish populations some room to grow back, future generations might not have any wild fish to eat at all.

12. We can’t feed the world on a paleo diet. Agriculture allowed humanity to increase from a few hundred thousand to seven—and going on 10—billion. Most of that agriculture was in the form of grains, which are several orders of magnitude more efficient per calorie than raising animals for meat. A grain-free diet is wasteful of natural resources, and cannot possibly feed 10 billion people. Paleo author Robb Wolf is a Libertarian and a climate skeptic and considers moral arguments about non-human animals “banal” (although does make some good points about the arbitrariness of “organic” and the net energy loss of bio-ethanol). Primal author Mark Sisson completely dodges the question of how to feed the world, just assuming everything will work out okay if we just make more food locally. I think we need a broader perspective, and vegetarians have been adopting this wider perspective since at least 1971, with the release of Francis Moore Lappé’s classic Diet for a Small Planet. But we need to go beyond food ideology here, integrating both health concerns as well as environmental and social issues in a way that is pragmatic and workable.

I’m not arguing here that a vegetarian or vegan diet is better in all ways for all people than a paleo diet. I myself stopped eating strict vegetarian due to health problems after eating that way for 11 years. If the paleo approach has worked for you, that’s great (for you). But we ought to consider its limitations, especially the environmental and social externalities of the paleo approach in a world quickly approaching 10 billion humans.

The big question is this: How can we eat in a healthy and sustainable manner that will allow all people enough healthy food, and sustain the ecosystems of the planet as a whole?

For more writing from Duff, join his email list here. 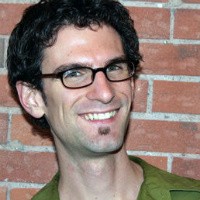