Whitesplaining, White Privilege & Whether You Should Keep Your White Mouth Shut About Race. 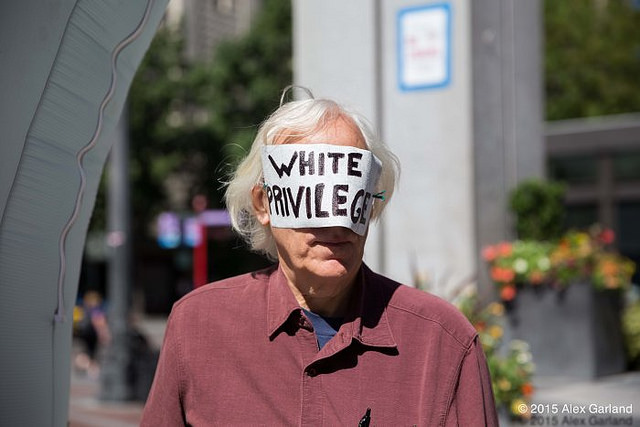 The author, Amanda Christmann, has been both praised and criticized.

Most of the praise comes from black people and most of the criticism comes from—you guessed it—white people. Some have even said they will not follow elephant any longer. Seriously.

I was surprised because elephant journal readers are generally people who are trying to be more conscious, more aware, who are seeking knowledge and some semblance of enlightenment. I’ve always felt that We are all One is a kind of underlying tenet of the elephant community.

In the article Amanda writes of all the things about race that she thinks she understands and wants to say. She does say them, pointing out the facts as she understands them, but in the end, she decides that maybe she should listen more.

I’m black and I loved this article and I definitely don’t want Amanda to shut up. Why? Because Amanda is sensitive enough to understand that as much as she might be cognizant of statistics and facts, she can never truly understand the experience.

She feels no need to whitesplain. This is when white people try to explain to black people how they feel, or should feel about issues related to race.

Although most of my white friends understand this concept, one said, “The term whitesplaining to me feels segregating and derogatory, continuing the very thing those of us in support of diversity are trying to eliminate. How are we (as a society) suppose to move forward with true equality if one group feels inferior?”

My response to her was, “So now I guess you know how it feels.”

In her article, Christmann addresses some important facts. Such as, one in three black men will be jailed in his lifetime—and how “that number is absolutely, unequivocally not because black men are committing the majority of crimes.”

The insidious and systemic racism that still exists in this country plays a significant role in everything from school inequality, achievement inequality, jail sentencing inequality, rampant police brutality and murder, to the Flint water crisis.

Yet a persistent wall of denial has been erected between many white people and the truth.

The denial of white privilege is the mortar that holds this wall in place.

Hint: white privilege is not related to wealth or class.

Macklemore, aka Ben Haggerty, is a white rapper who has jumped into the white privilege fray with a new song, called White Privilege II.

The song has been both hailed and attacked. But Macklemore told Rollingstone Magazine:

“The question is, what type of human do I want to be? How do I want to use my platform? Do I want to be safe, under the umbrella of my white privilege? Or do I want to push back and resist? There’s not a right or wrong answer for any human out there, it’s just an individual question, and I think that, for a long time, we were safe. It’s easier, as a white person, to be silent about racial injustice. It’s easier. On paper. But it’s not easier on the whole, because injustice affects all of us, whether we know it or not, whether we acknowledge it or not. At a certain point, this song might affect sales, this might affect touring, but it doesn’t matter if I’m not speaking up—if I’m not pushing myself to speak truth.”

In an interview on NPR he admits that the song is uncomfortable. The song was written after experiencing frustration and anger “on the night of the Darren Wilson non-indictment. He wound up at a Black Lives Matter protest in Seattle, yet wondered, “should I be here?” As a white person, was his presence of value? In my opinion, the fact that he had the introspection to ask that question meant he was right to be there.

I empathize with how many white people feel.

As nations often do, the United States has whitewashed (no pun intended) history. The degrading, violent, punitive history of slavery is not known or understood. So the question that many white people have, especially in light of having had a black president for the last seven years, is “why can’t they just get over it?”

In 2014, a 78-year-old white southerner named John Cummings opened the Whitney Plantation in Wallace, Louisana. It is the only museum in the United States dedicated to the slave history of our nation. He spent nearly sixteen years and eight million dollars of his own money to build the museum.

Mr. Cummings believes that white people have no idea what “it” is. His hope is, once they know what “it” is, they will better understand the current racial climate and act accordingly.

So how should white people talk about race? To decide whether you should or shouldn’t “shut your white mouth about race” watch what the video below and respond honestly. If you don’t stand up, then maybe you should start listening. (And keep watching for the social experiment she did on the Oprah Winfrey show that might just change the way you think about racism even further.)