This Powerful Story of Courage Could Save Your Life. {Video} 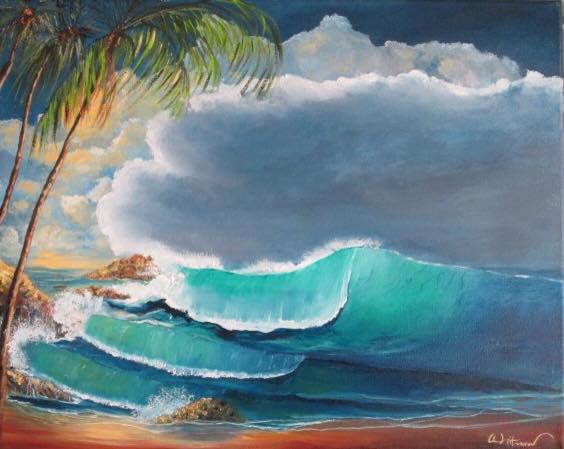 “May I be a guard for those without one. A guide for all who journey on the road. May I become a boat, a raft or bridge, for all those who wish to cross the water.” ~ Michele Baldwin.

Life has a way of handing us exactly what we need, when we least expect it.

Recently, my partner and I traveled to the island of Kauai to celebrate our 22 year love affair, and also to bring my newly released novel, The Dark Pool, to the mountain of Bali Ha’i for a gratitude ritual.

We had been in Kauai’s Poipu Beach area for a week before we made our way to the mystical North Shore; where almost three years before I had meditated at the foot of the sacred mountain to ask for courage to write my book and seeking healing after my adoptive mother’s passing over to the spirit world.

Somehow, my obsession with a civilized cup of English tea opened a portal for meeting a Kauai artist and his beautiful wife; both instantly familiar to us—an immediate friendship blossomed.

We were all in a grocery store, me looking for cream for my tea, and they looking for a decent movie to rent. Had it been up to me—who shies away from human contact—we would never have met. But my partner Steve has never met a stranger and straight away offered his opinion on their movie choice. I was drawn into the meeting standing beside them at the ATM.

Afterwards, we wondered if we had actually met them or was it one of those intra-dimensional occurrences that seem real but that only happened in another reality. We ‘recognized’ each other at soul level.

And that is how I found out about the story of Lady Ganga—Nilza’s Story. Here serendipity made another appearance.

Richard was painting in his home studio one day with doors open when a couple walked by and commented that the ocean scene he was depicting reminded them of their daughter, Michele Baldwin. Further conversation revealed the story of Lady Ganga, a 1,000 mile journey that their daughter had taken stand-up paddling on the River Ganga in India, to raise awareness about Cervical Cancer and HPV, the virus that causes it.

The painting was commissioned, changes made according to what represented Michele, and as Richard puts it, went out of his hands and heart to the home of Michele’s parents who are spreading Lady Ganga’s story, even speaking at the UN about the importance of cervical cancer screening.

I had never heard of Lady Ganga and to be honest, had just gone through intensive screening for cervical cancer after perhaps 30 years of not having had a pap smear. I rarely visit a doctor’s office, and it was only recently after some serious complications while entering my menopause journey that I went for a doctor’s consultation. There was nothing wrong with me save for my body’s natural way of dealing with things, but I am not immune to the irony of being presented with Lady Ganga’s film just after I had been reminded how important screening is.

My philosophies about health and medicine are definitely alternative, and I choose what interventions I wish for my body very strictly. We would probably not agree on every vaccination invented or prescribed. But having lost my natural mother at a very young age to cancer, I was deeply moved by this story of courage, and now pass it along, as serendipity would have it; acknowledging my own stubbornness against such a simple test that literally will save thousands of women’s lives.

Michele’s story parallel’s the story of another woman in India, Nilza, that you will see when you watch the film.

There is such strength in how women caregive. We give all that we have and then some. We bleed for the well-being of our children and our family in general.

We also put ourselves last, out of a sense of responsibility and the love we offer so unconditionally. No matter how well we know that to put ourselves last makes no earthly sense and that it is even a function of our ego to give up on ourselves, we still don’t take care of body and soul the way we should.

The best way for me to share my hard-earned lesson with you is to share this film.

Please watch and share with as many women as you can. We often do not speak of life and death with the reverence they deserve, and a film can put us in touch with our emotions and thoughts better than any speech you could hear.

As for me, I do not fear death because I know that it is all a continuum, but I do hope for as long as possible in each life time to accomplish all that I’m here to do. I know, intellectually, that I cannot die before my time, but I fear leaving my children behind, my lover, my opportunity to experience what this planet has to offer.

Watching Michele and Nilza’s story, I am reminded of the extreme beauty of each incarnation. I am reminded that it takes courage to live, and especially to live like Michele lived—with love for humanity as the guiding light.

Her courage in dying is also an inspiration to me—so much grace. I wonder what my mother thought about when she was ill and dying, how difficult that must have been for her to leave me behind at such a young age. It opened me up to great compassion.

“It gives me great peace to have compassion for my body that’s withering and dying rather than anger and despair.” ~ Michele Baldwin

The story of Lady Ganga reaches much further than a passionate appeal about our physical bodies. It is a story about the enduring human spirit, and I bow to this woman whom I have never met but who is such a profound teacher.

Please, go for a pap smear. Take care of yourself. As much as you love others, extend the same love to yourself.