An Introduction to the Third Eye: A Meditation to Increase Intuition & Focus. 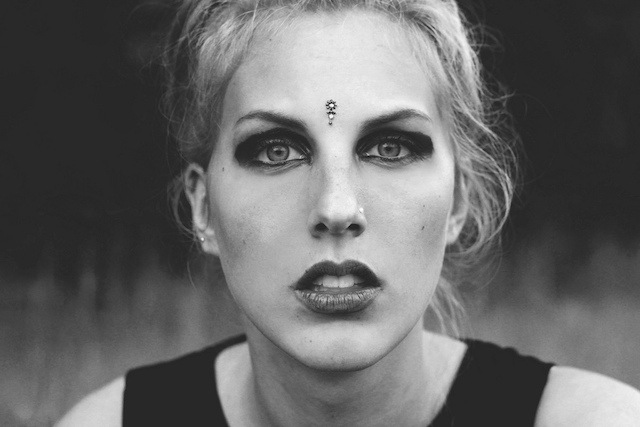 The chakra system is like an ancient bridge, one that connects our esoteric body with our physical and emotional bodies.

Imagine an old rickety bridge, one that has fallen into disrepair because it’s not used; it’s been forgotten. It’s overgrown, rotting away and quite unstable.

Now imagine a much used and cared for bridge. One that is honored and loved for its necessity in daily life. When a part gets wobbly, it’s fixed. The growth is cleared from around it often so it may remain clear and accessible.

Now take a moment and ask yourself, which state is your chakra system in? It will tell you if you listen. If you often find yourself stuck, frustrated, powerless or unhappy, the root may lie in your blocked chakra system.

Not very long ago, I had no idea what a chakra was, or that serious imbalances and energetic blockages within a particular chakra could be at the root of all of my issues with addiction, communication, anger, insecurity and so on (the list goes on and on). Since diving deep into the ancient Sanskrit teachings on balancing and healing these energetic centers, I have become a different person, one who is free from addictions, emotional imbalances and self-imposed belief systems, which held me back and kept me in feelings of self-doubt, fear and failure.

These benefits are waiting for anyone who has the motivation to step up and work for it, and it’s my goal to present a beginner’s practice, chakra by chakra, to help anyone who is seeking change. There are seven major chakras, or energy centers within the body, and each governs its own area of our behaviors, emotions and physical functions.

Here, we will explore and discuss the sixth major chakra—the Ajna, or the Third Eye Chakra. This is the command center of your spiritual body and intellect.

Previously, we worked with Muladhara, Swadhisthana, Manipura, Anahata and Vishuddha.

As a beginner, I encourage you to balance and work with each chakra starting from the root and working up.

This chakra is located at your Third Eye center, as you often hear in yoga, and it encompasses the head, brain, pineal gland and eyes. That point between our eyes, above the nose, in the center of the forehead. It is where perception meets logic. Where we intuitively makes sense of what is occurring around and within us. If you are rigid in your thinking and beliefs and you struggle with entertaining new ideas or beliefs, you may benefit from working with this chakra.

This is your center for deep knowing and higher consciousness. This is where you break through to reconnect with the Higher Self. As people work to open Ajna and get the energy flowing, they often find their intuition and psychic knowing sharpens drastically.

Do you feel blocked in your spiritual realizations?

Positive aspects of Ajna manifest in your ability to be rational and to see the bigger picture. Practice of disciplined imagination arises from this center. Sixth sense arises from Ajna as it regulates and governs the five lower senses.

Ajna strongly relates to higher living. There are six spiritual powers which are linked to Ajna. These are: the ability to control your thoughts and direct your attention, the ability to practice perfect concentration, the skill of sitting in unobstructed meditation, which brings you to enlightenment, and finally reaching samadhi.

This chakra’s element is mind and light, which symbolizes rising above all physical elements, its color indigo, its sense intuition, its organ the eyes, its activity is thought and intellect, and its planets are Saturn and the Moon.

It directs all aspects of wisdom and consciousness. Imbalances may manifest as learning disorders, obsessive compulsive disorders, epilepsy, brain hemorrhages or strokes, dyslexia, nightmares or forgetfulness. It governs the pituitary gland, eyes and the Medulla Oblongata—thought by many to be the source of connection to prana, or the Life Force.

The mudra (I use Hakini mudra) calls for bringing only your fingertips together with the opposite hand pointing upwards. This mudra focuses concentration and Ajna energy.

So much of our inability to concentrate and focus stems from blocks and imbalances here. The constant assault on our senses, which pulls our attention every which way but the present, weakens Ajna energy. The lack of self-discipline we find in today’s world is a direct manifestation of deficient Ajna on a collective level. I believe the rise in disorders such as OCD and ADD roots in overactive Ajna energy. I suffered from severe blocks and inabilities to live in balance between heart and mind for many years. I was living in a state of delusion which no one could shatter. I was closed off to anything outside of my intellect. Clearly, as I am writing on this topic, I do not live in this state any longer, thanks to my working with Ajna energy regularly. I lived alone and I lived solo. Now I feel part of an interconnectedness with all—the Collective Consciousness.

The goal of working with Ajna is to establish a healthy and disciplined view of reality and ability to see the bigger picture as it is, rather than how we think it should be.

Keep in mind, this is meant to be a beginner practice. Chakra work is something that goes deep within, tapping into an infinite source of ancient connectivity. If you quiet yourself, your chakra will tell you what it needs. Believe it or not, they will work to heal themselves once you start giving them the energy and attention to do so.

Many of our problems occur because, like a wheel, one spoke out of alignment results in a flat tire. When all chakras are open and running in a balanced state we find harmony within our mind, body and soul. Remember—have fun. That’s the most important part.

I would love to answer any questions or comments below! I look forward to hearing about your chakra work.