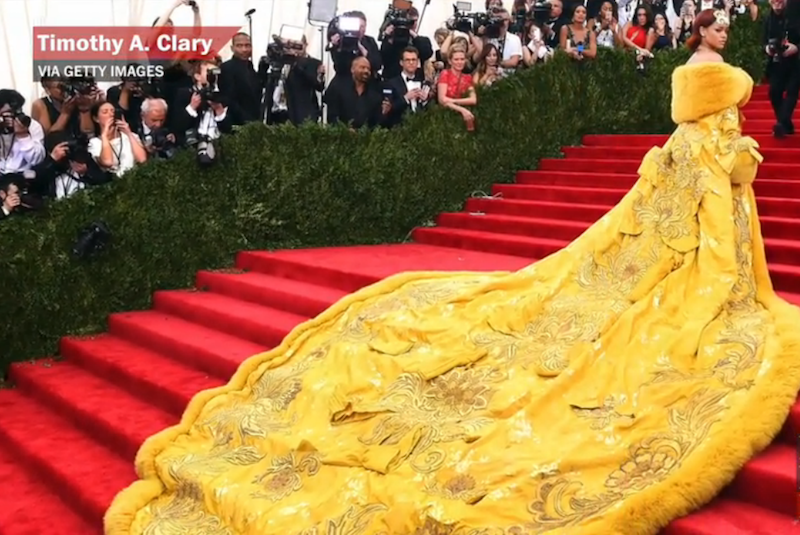 “Sorry for the inconvenience. We are trying to change the world.” ~ Instagram, author unknown

I have never been one to focus on the negative, nor to criticize others for living the way they choose.

However, just after the one year anniversary of Rihanna’s appearance at the Met Gala, wearing her yellow, fox fur dress, I still have the inner compulsion to want to hurl pieces of soft, gooey mud at her and shout, “Why, why, why?”

I think we all had a few things to say about that dress and we should—after all it is only through inquiry and investigation that as a society we change and grow.

There are currently massive influential corporations, monopolies and under-cover, money markets that drive our beautiful world—Hollywood and the media being a couple of the largest of these. When I realized Rhianna’s iconic dress was still bothering me today, I decided to do some research of my own into why.

Below are five reasons it might deserve to get under your skin too!

So first off is the feminist argument. In no way do I think Rihanna has tried to be a great role model for women and nor does she have to, but this statement of hers hit me right in my gut. In this century, should we still focus on the idea that “beauty is pain” and that we have to go to uncomfortable lengths to have it—the same ones that led women to wear whale-bone corsets, bind their feet and take arsenic to keep their skin pale? I don’t know about you, but I thought we already threw our bras on the fire and burned them?

Does the fact that this dress was either handmade or manufactured by a non-Caucasian woman make up for its other moral atrocities? The creator, Guo Pei, was quoted in Vanity Fair as saying, “It is my responsibility to let the world know Chinese tradition, give the splendour of China a new expression. I hope people know China in this way.’ My question is, why is a Barbados born, American pop-star now the proud representative for Chinese tradition? Rather, could it be a current example of cultural appropriation and a hint at how North Americans are still creating the “exotic Asian other” and keeping us slightly superior.

Is animal rights not a hot topic anymore? Every headline made a statement of “Rihanna’s fox fur gown,” but only a minuscule few brought up the fact that this dress was lined with real fur. Respect for Animals quoted that, “More animals die for fur trim than to make full length fur coats. Fur trim isn’t the “leftovers” from making full length fur coats. Here is a guide to the number of animals that suffer and die for “fashion.” Respect for Animals estimates that it takes up to 20 foxes to make one regular size coat, since Rhianna’s gown reportedly weighed 55 pounds, I suspect her trim took about 100 animals to make.

Sometimes admitting the truth of something is harsh and in a place like Hollywood where their success relies heavily on our fantasy driven projections of a perfect life, they understandably left this point out of their headlines. Too bad.

All the major magazines I read articles in, including Huffington Post, who usually has a more balanced voice, shared similar titles of “Rihanna Steals the Show in a Gorgeous, Gigantic Gown.” Although, when I spoke with people and read their responses online, I realized most of us regular folks found the gown appalling, saying such things as it looked like a cracked raw egg, pizza, big bird and a disgusting waste.

In USA Today they did mention some criticisms on the appearance of the gown, but still no where did they bring up the other moral issues. I guess when that much money is involved (apparently the dress was upwards of $700,000) we like to still keeps things fairly superficial.

This dress actually made me feel ashamed of being a North American. When what we think best represents us at a museum gala is a gown of utter extravagance, that came with great environmental cost, and was used only once, reeks of our consumerism and capitalist driven society. It smelled of old world bourgeoisie, and their negligence of anyone, animal, plant or human who was part of any considered lower walk of life.

With the state of our world do we really want to promote this idea…or shall we question it?

As many as 100 foxes were killed to make this dress that took two years to put together, three people to carry, and was worn for about one hour (as soon as she was off that tightly piled crimson carpet she changed into something ‘more comfortable.)

Perhaps one of the biggest reasons this dress is still on my mind is because Rihanna has the money and power to invest in the most conscientious attire ever. Her dress at the Met Gala was more then a fashion statement, it was a comment on our current society and the need that there is for us to still wake up.

For all the Earths’ precious resources that this fox fur dress absorbed, I do find some grains of gratitude in it. It can be a teacher, one that serves as a quick slap on our hand and a sign of the good and hard work we still have left to do in becoming conscious.

I feel it is important to keep our eyes and hearts open to the things that disturb us. Behind our initial reactions usually lay valid and good reasons why.

“The world will not be destroyed by those who do evil, but by those who watch them without doing anything.’” ~ Albert Einstein

We need to be the ones who question pop-culture and keep mass corporations and media driven industries in-check.