What White People Can Do, because Black Lives Matter. 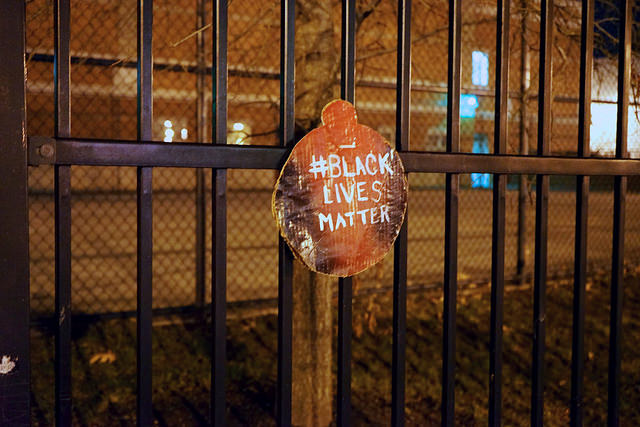 I live in the St. Louis area and I spend much of my time in mom and pop coffee shops where windows and bulletin boards are plastered with flyers about indie rock bands and social justice clubs.

Theyâ€™re surrounded by century-old brick houses, many of which have Black Lives Matter signs in their yards among the wildflowers and edible gardens.

I love these neighborhoods. This is my tribe.Â What we missed during the â€™60s by not being born yet, we are making up for today, only with less drugs, more tattoos, and smartphones instead of bullhorns to protest and rally.

I especially love that, just a few miles from Ferguson, there is so much obvious support and awareness about the injustice and discrimination that has been leveled against the black community for far too long. There is passion here for listening to the voices and the stories that have been ignored by lawmakers, leaders, and (dare I say?) white people for far too long.

White lives (because really, thatâ€™s what weâ€™re talking about in arguments like this) have been about the only things that have mattered for so long that itâ€™s about time someone pointed out what should have been obvious for centuries.

I am white, and I can only speak for myself on this issue. I don’t represent everyone else who is white, just like any single person of color doesn’t represent all people who look like them.

Black Lives Matter is important in getting the conversation started, but for many white people who want change, we’re left with the lingering question, “What can I do?â€ť

There are plenty of facts out there that many of us white people canÂ educate ourselves with. Many of us are completely ready to stand up alongside black people. We just donâ€™t always know how. That’s where we need help.

Our black neighbors don’t always know how to talk to us about it, either. Honestly, it’s not their place to make us white people feel comfortable about racism. It’s not their dutyÂ to be inclusive in order to accommodate me or other white people.

But I do listen, and there are a few things we can do together to right some of the wrongs.

Start simple. Call people out when they make racist jokes or statements. Talk to children about racism, and don’t be afraid to point out injustices to them, or anyone else, when they happen. Children can understand far more than we give them credit for.

Keep getting angry over the beatings and shootings of (often unarmed) people of color, and pressure local, state and national-level politicians and leaders to hold cops who misuse their power criminally accountable for their actions. At the same time, support the good ones because we need them, too.Â Supporting law enforcement and recognizing there are wrongs are not mutually exclusive propositions.

Mandatory minimum sentencing, â€śtough on crimeâ€ť laws, criminalization of poverty, and discriminatory drug laws have destroyed the fabric of a widely disproportionate number of black families. Letâ€™s all demand sweeping reforms to a justice system whose campaigns are funded by a privatized prison industry that makes billions of dollars from putting one in three black men behind bars during their lifetimes, and that doles out harsher punishments for black people than for white people who commit the very same crimes.

Letâ€™s recognize that public education is under attack, and that the corporate school “reform” movement that has shifted money out of the hands of public schools and into the wallets of privatized charter schools is failing our kids. Not only has this had a huge negative impact on a disproportionate number of black students, thousands of black teachers, who have been the backbone of urban public schools, have lost their jobs due to a record number of public school closures across the country, primarily in poor neighborhoods where property taxes cannot support school maintenance.

Demand that our representatives quit cutting funding to all of the already-bleeding public sphere. Demand they prioritizeÂ public housing, to public hospitals and clinics, to public libraries and other institutions that serve those who need them mostâ€”most of whom are elderly or handicapped.

Acknowledge and validate the anger. Bad things have happened for a long time, and it was only 48 years ago that the Civil Rights Movement officially ended. We canâ€™t say that itâ€™s not about slavery, because the truth is, there have been lingering effects and attitudes that have forced the black community, as a whole, behind the curve ever since. At the same time, we do need to forge forward and take action, and we can do it so much faster and so much more effectively if we all do it together.

White people, stop saying that color doesnâ€™t matter. It does. Unless you are blind, you cannot look at another person and not see their color. When we pretend to ignore it, we are invalidating the unique history, culture, struggles, and many accomplishments that people of color have endured and achieved.

White people, listen to what black people are saying. As a white person, I acknowledge that I am inadvertently and unwillingly a participant in institutional racism. I recognize that I have had privilege because of nothing more than my skin color. I also know that I will never fully understand what it means to be black in America, or to be a black woman, a black man, a black transgender person, or any other intersectionality that involves being black. But I can listen and try to understand, if I just close my mouth and open my ears and eyes, and believe people when they say what is happening in their communities.

We can do this together. And we must. Because black lives do matter.

For better orgasms, you need a healthy relationshipâ€”with your pelvic floor. Here’s the best solution we’ve found (and we’re not the only ones who think so) >>